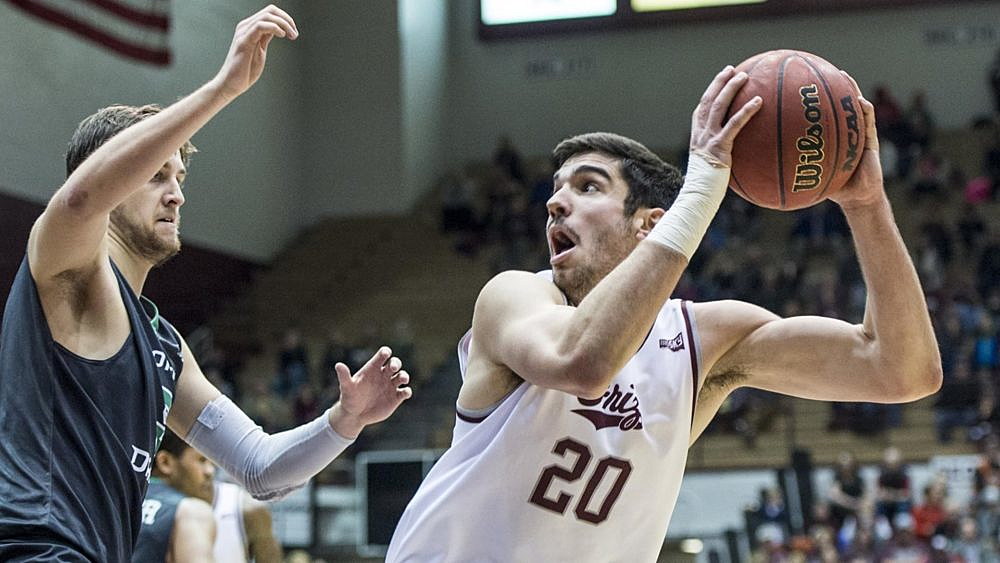 Now five games into the college basketball season, Montana has displayed signs of promise – a signature win at Pitt and one of the best averages in the country for forced turnovers. The Grizzlies, though, are also struggling from three-point range – on offense and defense – and are lacking consistency.

Once again, the biggest thing is consistency.

“We have some guys that are growing and coming out of their shell a little bit,” DeCuire said. “We just have to find a way to play well on the same night together.”

After five games in the first 12 games of the season, Montana flew back to Missoula on Wednesday, taking Wednesday and Thursday off. The team held a practice on Friday morning and will have another on Saturday to prepare for a Carroll team that is averaging more than 90 points per game at the NAIA level.

The Fighting Saints have five players averaging double figures and will pose a challenge to Montana’s defense.

SERIES VS. THE FIGHTING SAINTS
Unofficially, Montana holds a 26-12 advantage over Carroll, including a 12-9 mark in official games. The series goes back more than a century, to the 1911-12 season, when the two teams met for the first time. Montana and Carroll played three times in the first two seasons and eight times during a two-year stretch from 1943-45. After beginning the series 4-9, Montana has won eight consecutive contests against Carroll, including three in the past five seasons.

In a 23-point win in 2014, Fabijan Krslovic had three steals, three blocks and five rebounds as Montana held Carroll to 35.8 percent shooting. A year later, Montana grinded out a victory over Carroll, including a near-double-double by Krslovic (10 points, nine rebounds) and an eight-point, four-block performance by Michael Oguine.

CLUTCH RORIE
Junior guard Ahmaad Rorie has scored in double figures in all five games this season, averaging 18.6 points per game. The point total is impressive, but more impressive is when he is scoring. Six of Rorie’s 18 points at Pitt came in the overtime period, while two nights later at Penn State, he had four points, a steal and an assist during a 9-0 UM run to cut the Grizzlies’ deficit to a single point, 51-50, midway through the second half.

The all-conference performer was on full display again vs. Oral Roberts (Nov. 20), scoring a team-high 18 points, in addition to six assists and three steals. Trailing 17-16 with 8 minutes to play in the first half, Montana closed the half on a 15-6 run. Rorie had nine points and two assists during that run, contributing to six of UM’s eight made field goals. He was again clutch late, knocking down both free-throw attempts with 22 seconds to play to increase Montana’s lead to two possessions.

ALL-AROUND RORIE
Ahmaad Rorie played in all 40 minutes vs. UC Santa Barbara and ranks sixth nationally for minutes played per game. He also ranks highly, however, for points (18.60 per game) and steals (2.60 per game). In fact, Rorie is one of six NCAA Division I players to average at least 18.0 points per game and 2.50 steals per game. He joins Mikal Bridges (Villanova), Melvin Frazier (Tulane), T.J. Holyfield (SFA),  Justin Turner (Bowling Green) and Thomas Wilder (Western Michigan).

NICHOLAS FINDING HIS FORM
Travis DeCuire had high expectations for Karl Nicholas, but the freshman was limited early in the season due to foul trouble. Through his first three career games, Nicholas averaged just 7.7 minutes per game, picking up four fouls in each contest.

The Texas native had a breakout week in Malibu, Calif., however, playing 18 minutes vs. Oral Roberts (Nov. 20) and 28 minutes vs. UC Santa Barbara (Nov. 21). Nicholas averaged 10.5 points per game over the two contests, connecting on 10 of 15 shot attempts. Nicholas also added nine rebounds in the two games.

BUCKING THE TREND
Penn State entered its Nov. 15 contest vs. Montana ranked seventh nationally, averaging 13.0 steals per game. The Grizzlies protected the ball, however, limiting the Nittany Lions to just three steals. A week later vs. UC Santa Barbara, Montana was going up against a Gauchos squad that ranked fifth nationally, turning the ball over just 8.0 times per game. The Griz defense was active and stingy, forcing UCSB into 21 turnovers – nearly three times its season average.

OGUINE RECOGNIZED BY COLLEGE SPORTS MADNESS
Junior guard Michael Oguine was the College Sports Madness Big Sky Player of the Week for games played Nov. 13-19. Oguine scored a career-most 29 points in a signature victory at Pitt (Nov. 13) and then two days later at Penn State (Nov. 15), totaled 15 points and grabbed seven boards in a narrow loss to the Nittany Lions.

Oguine has scored in double figures in all five games and is the team leader for rebounding, despite standing at just 6-2. Oguine ranks second on the team with 17 assists, to go along with five steals and three blocked shots.

CRASHING THE GLASS
Montana has out-rebounded its opponents in each of the last four games, which is particularly impressive considering two of the contests were road games against an ACC and Big Ten school. More than one-third of Montana’s rebounds have come from the offensive end (36.7 percent). That number was 28.6 percent a year ago.

On the season, Karl Nicholas has 10 offensive rebounds compared to five defensive. Michael Oguine, UM’s leading rebounder, also has nearly as many offensive boards (15) as defensive (16). In their most-recent game, the Grizzlies out-rebounded UC Santa Barbara, 17-6, on the offensive glass.

FORCING TURNOVERS
Montana has forced more turnovers than its opponents in four of five games, tying Penn State with 15 turnovers apiece in the other. The advantage has led to a +5.4 turnover margin (28th in NCAA). The Grizzlies caused Whitworth to commit 24 turnovers (Nov. 10) and UC Santa Barbara – which entered the game ranked fifth nationally for fewest turnovers surrendered – to 21 (Nov. 21).

In a win at Pitt (Nov. 13), Montana forced the Panthers into 19 turnovers, converting them into 30 points – an average of 1.58 points per turnover.

STOUT DEFENSE
Montana is allowing its opponents to shoot at too high of a percentage, particularly from the three-point line. However, the Grizzlies are doing a good job of preventing teams from getting shots.

DYNAMIC DUO, PART I
Junior guards Michael Oguine and Ahmaad Rorie enter Sunday’s contest each averaging more than 16.0 points per game. The tandem is one of 27 across all of NCAA Division I with two players on the same team averaging that many points per game.

Both Oguine and Rorie have been in double figures scoring in all five games this season and rank among the nation’s leaders for a variety of categories:

WELL CONDITIONED
Montana has three players who rank in the top 100 nationally for minutes played, with Ahmaad Rorie averaging 38.4 minutes per game, Michael Oguine averaging 35.8 and Bobby Mooreheadplaying 34.4 per game. The Grizzlies are aided by an overtime game, but even without the extra five minutes, all three would rank among the top 2 percent of all players nationally for minutes played. In fact, Montana is one of 10 Division-I schools nationally to have three players average 34.0 minutes played or more (also: Arizona State, Duquesne, George Mason, Holy Cross, La Salle, Mt. St. Mary’s, Ohio, Santa Clara and Toledo).

LOOKING AHEAD
Nearly halfway through its non-conference slate, the Grizzlies will play seven more games before entering league play. Next up for the Grizzlies is a trip to Stanford (Nov. 29), followed by a home game vs. Cal State Northridge (Dec. 3).