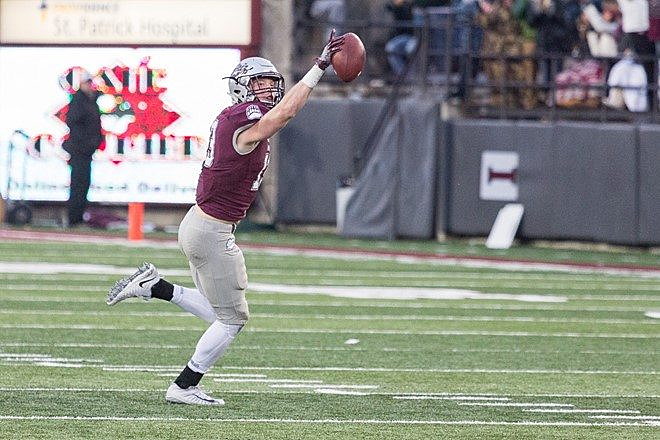 Call it gritty, call it gutsy, call it sloppy or call it lucky – whatever you call it, it’s a win, and Montana’s victory over No. 9 Northern Arizona was a big one, giving the Grizzlies a big-time boost of confidence heading into the two most important games of the season.

Montana returns home to Washington-Grizzly Stadium this week for the final regular season home game of the year with a trip to the playoffs in the crosshairs, needing to win out to advance to the playoffs for the twenty-third time in program history.

“Beating Northern Arizona was a quality win for us and really made a statement that we belong,” said head coach Bob Stitt. “You pat yourself on the back for a couple of days, but then you have to put it behind you, get back to work and understand that you’re only as good as your next performance.”

The first hurdle toward making the playoffs: Northern Colorado, who defeated the Griz last year for the first time since they joined the Big Sky Conference in 2006, adding the element of payback this week’s showdown in Missoula.

THE GAME: The Northern Colorado Bears (2-6, 1-5 BSC) pay a visit to Missoula on Nov. 11 in the penultimate game of the regular season as a team needing to finish a tough year on a high note. Montana (6-3, 4-2 BSC) enters the game focused on winning out, and making a return foray into the playoffs amidst Senior Day festivities.

Despite UNC coming to town on a five-game skid, Montana won’t take the Bears lying down, with memories of a tough loss in Colorado last year still lingering fresh on the team’s mind.

“Northern Colorado’s a good team,” said Stitt. “Earnest (Collins – UNC head coach) does a nice job with those guys, and we’ve got to be ready. Our guys are not going to give up a Saturday and not give it everything they’ve got. We’ve put too much into this thing not to be playing our best football in the tenth week of the season.”

Like Montana, the Bears are without the services of their first-choice quarterback, losing junior Jacob Knipp to a season-ending injury against North Dakota. Despite playing only six games, Knipp maintains the Big Sky’s second-best passing efficiency at 154.2.

High passing efficiency requires a talented corps of wide receivers, and junior Alex Wesley fits the bill for the Bears. Wesley has caught for over 100 yards in four of UNC’s eight games this season, averaging 106.1 yards-per-game – the fourth-highest total in the Big Sky.

The next man up at quarterback for the Bears is 6-foot-3 JC transfer Connor Regan who threw for 392 yards against Southern Utah two weeks ago. UNC also brings a potent rush attack to UM, led by 200-pound junior tailback Trae Riek, who averages nearly 65 yards-per-game and over four yards-per-touch.

“They’ve got a very good quarterback. He’s their backup, but man he can throw it. Their running back is very good, and their receivers are quality. They’re fast,” said Stitt.

While Montana’s pass defense will be tested behind the arm of Regan, he will likely be put under all kinds of pressure in the pocket.

The Griz defense enters the game with three of the top four conference leaders in tackles for loss, with senior Tucker Schye leading the league averaging 1.5 TFLs per game, ranking him at No. 15 nationally.

Defensively, UNC has fluctuated between a three and four-down front in recent years, giving Stitt’s offense multiple pictures to contend with.

“You never know what they’re going to show up in, so we’re ready to go against either front regardless,” said Stitt. “But they’re a good team.”

LAST MEETING: Just under one year ago to the day, Montana fell to Northern Colorado in Greeley 28-25, dropping their fourth consecutive conference game on the road.

Backup quarterback Chad Chalich started for the injured Brady Gustafson for the second-straight week, as the Griz racked up over 200 yards on the ground against UNC, and 400 yards of total offense.

But Northern Colorado took advantage of costly special teams errors, and receiver Hakeem Deggs got UNC on the board just over a minute into the game to put the Griz on the back foot early.

SERIES HISTORY: Despite last year’s loss at Nottingham Field, Montana holds a commanding lead over UNC in the overall series, dating back to when the Bears competed in D-II in 1976. That year, the Bears handed the Griz a 27-19 loss in the first-ever game between the two schools.

The Griz are 13-2 all-time against the Bears, and a perfect 8-0 at home, including an unblemished 6-0 mark inside Washington-Grizzly Stadium.

WHERE TO WATCH: This week’s matchup against Northern Colorado is the fourth of five Griz games to be broadcast on the ROOT Sports Network this season. Next week’s Brawl of the Wild game will also be on ROOT Sports.

ROOT Sports is a division of AT&T Sports Networks, and is available nationwide on DirecTV channel 687, Dish Network channel 426, and locally on Charter Spectrum cable on channel 60, 122, and in HD on channel 560. Visit GoGriz.com to find a link to a ROOT Sports channel finder to see if the broadcast is available in your area.

The game will also air live regionally on AT&T Rocky Mountain, AT&T Southwest, and the Audience Network. Check local listings to see if you can watch. No webstream is available for ROOT Sports games this year.

Veteran announcer Tom Glasgow will lead the play-by-play call against the Bears with support from analyst Jason Stiles and Jen Mueller on the sidelines.

LISTEN & FOLLOW: “Voice of the Griz” Riley Corcoran will have the radio call of Saturday’s game, supported by long-time color commentator Greg Sundberg in the booth. Fans can tune-in to the flagship station of Grizzly athletics, KGVO 98.3 FM and 1290 AM in Missoula, or statewide on the Montana Grizzly Sports Network. Fans worldwide can stream the radio broadcast of the game at GoGriz.com, via the official Grizzly Athletics mobile app, or via TuneIn.com and the TuneIn app.

MILITARY APPRECIATION DAY: With Saturday’s game falling on Veterans Day, fans will want to find their seats early as Grizzly Athletics says thank you to the countless men and women who put themselves in harm’s way to serve our country.

THANK YOU, FIREFIGHTERS: Grizzly Athletics will also salute the men and women who protected our communities during Montana’s historic fire season of 2017. As a small gesture of our thanks, UM President Sheila Stearns and athletic director Kent Haslam have invited hundreds of local firefighters and their families to enjoy Saturday’s game as a group.

Members of the fire community will be seated in Section 117 of Washington-Grizzly stadium. Be sure to give them a smile and a wave, and thank them for their efforts this summer.

CAN THE CATS: Griz fans are encouraged to help make the holiday season brighter for Montana families by donating to the annual Can the Cats food drive, a combined effort with Montana State which collects food and donations that support the local food bank.

Can the Cats donation drop-offs will be located inside Washington-Grizzly Stadium during Saturday’s football game vs. Northern Colorado.

Last year, the two universities teamed up to donate a record 412,362 pounds of food, in addition to $232,294 in cash donations. The competition extends through the morning of Nov. 18, with the winning school being announced during the Brawl of the Wild game in Bozeman. More information is available at cantthecats.com.

DEPTH CHART UPDATE: Montana is hoping to see quarterback Gresch Jensen return to action after missing the Northern Arizona game while going through the concussion protocol thanks to an injury suffered at Weber State.

The redshirt freshman signal-caller ranks sixth in the Big Sky in total offense with an average of 264 yards per game, despite only seeing five games as a starter for the Griz.

Running back Jeremy Calhoun is also expected to return to action against UNC after leaving the game early against NAU. Calhoun, along with Alijah Lee, is an integral part of Montana’s one-two punch ground game that averages over 105 yards between them.

Also returning to the depth chart this week is senior safety Justin Strong, who is coming off a two-game suspension. Junior Evan Epperly is scheduled to start in front of Strong at free safety.

GRIZ IN THE POLLS: Despite unseating last week’s No. 18/16 NAU Lumberjacks, Montana remains just out of the weekly Top-25 polls at No. 29 on both the STATS FCS media poll and the FCS Coaches’ poll.

Never the less, with only two Big Sky losses the Griz remain contenders for a trip to the playoffs if they win the next two games to finish 8-3. Other key matchups around the league in the final two weeks include Southern Utah at upstart UC Davis this week, followed by a visit from NAU to finish the season.

–    Makena Simis led the Griz from the front to the win over NAU with 101 net yards rushing. Jeremy Calhoun was the last Griz to run for 100-plus, going for 124 at Portland State earlier this season.

–    Sims blocked an important Lumberjack PAT in the second quarter. He is the first Grizzly to block a PAT since Craig Mettler did it against Montana State in 2007, one of the oldest occurrences on the “Last time a Grizzly” list. The only two older? Brian Ah Yat’s 500+ yards of total offense in 1996 and Jimmy Wilson’s 67-yard blocked field goal return for a touchdown in 2005, which also came against NAU.

GRIZ QUICK HITS:
–    Jerry Louie-McGee‘s 48-yard punt return for a touchdown was the second of his short career (his first at Northern Iowa in 2016). “Mr. Electricity” has made his way onto both kickoff and punt return teams for Montana, and immediately produced last week with a touchdown and 118 all-purpose yards.

His punt return was also featured as the No. 5 NCAA FCS Play of the Week.

–    Montana’s 17-15 win over NAU was the twentieth of head coach Bob Stitt‘s career at UM. Stitt holds a 20-13 overall record (.606) in his third year of rebuilding a team mired in NCAA sanctions.

–    Three other players are scheduled to make their twentieth start for UM this week against Northern Colorado. Keenan Curran, Cooper Sprunk, and Markell Sanders will all lead the Griz for start No. 20 in their careers.

–    Connor Strahm‘s 16 tackles against NAU was a career high, and one of the big reasons he was named the ROOT Sports Big Sky Conference Defensive Player of the Week.

–    Jesse Sims had 10 tackles and one pass breakup against NAU – both career highs.

–    It’s bears vs bears this week as the Montana Grizzlies host the UNC Bears. Did you know group of bears is called a sleuth?