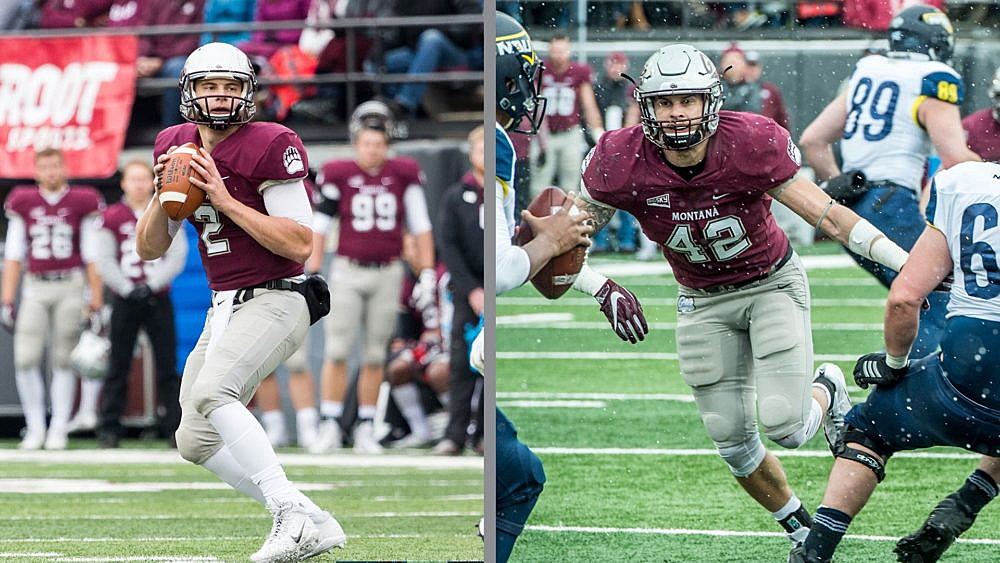 In his first year of college football, Montana quarterback Gresch Jensen did what many thought to be impossible: come in as an injury replacement and lead the Griz to one of the top overall offenses in the FCS as a freshman.

Linebacker Josh Buss did something that many thought to be impossible too, dominating the Big Sky or a second-straight season after racking up 20 tackles for loss as a sophomore.

Both players were game changers for the Griz in 2017, and their efforts have not gone unnoticed.

After leading Montana to a winning season at 7-4, Jensen and Buss have both been named finalists for two different national player of the year awards.

Buss, who won his second-straight Defensive MVP award on Sunday, is now a finalist for the STATS FCS Buck Buchanan Award for national defensive player of the year.

Jensen, who was also named the team’s offensive MVP last week, is a finalist for the STATS FCS Jerry Rice Award for the nation’s top freshman.

The duo was named to their respective award watch lists in late October/early November, and will now be in the running to be crowned kings of the FCS at the awards banquet and presentation scheduled for January 5 in Frisco, Texas, on the eve of the national championship game.

Jensen is the second-straight finalist for the Rice award, with Jerry Louie-McGee finishing seventh in the voting in 2016.

Buss is the eleventh Grizzly to be in the running for the defensive player of the year award. The last Montana player to take home the award was Tyrone Holmes in 2015, and Kroy Bierman before him in 2007.

Montana quarterbacks coach Andrew Selle, himself a former Griz signal caller, credits Jensen’s poise under pressure, leading UM to a 4-3 record as a starter after being thrust into action to cover for injured senior Reese Phillips.

“It’s obviously a great honor for Gresch, and he absolutely deserves it,” said Selle. “I think it’s a huge testament to the guys around him too. The way they rallied around him, the supporting cast he has up front, our H’s blocking, everyone. I really think it’s a testament to our offense as a whole and Gresch is kind of the face of that being the quarterback, so it’s a great honor.

The voting panel for both awards consists of over 150 sports information and media relations directors, broadcasters, writers and other dignitaries. Voting is based on the regular season.