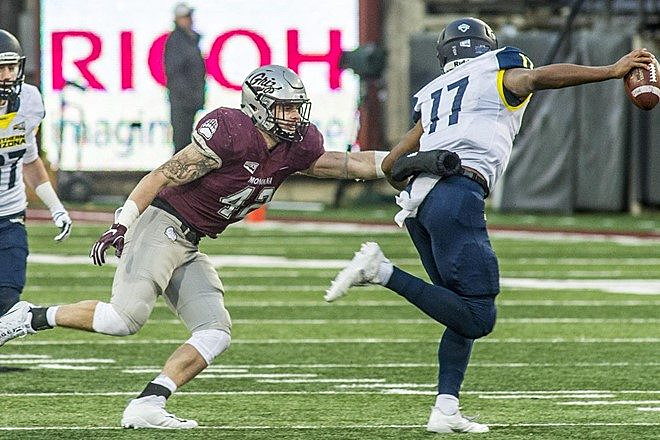 In a game that many people called a must-win in order to keep Montana’s playoff hopes alive, the Grizzlies bounced back from a disappointing road loss to earn a signature victory by knocking off No. 9 Northern Arizona, 17-15 on Saturday.

Montana is the first Big Sky team to defeat the Lumberjacks, who were previously 5-0.

“The process has prepared us, and we were ready for a big-time game, and one that we’re going to be talking about for years to come,” head coach Bob Stitt said.

It was a wild game that included Montana using a wide receiver at quarterback and NAU being forced to use its backup after its starting quarterback was ejected for targeting. The Grizzlies got their first touchdown on a punt-return score by Jerry Louie-McGee, but the stout defense was the story of the night.

The unit forced eight punts, two turnovers, a turnover on downs and a missed field goal. Following NAU’s second scoring drive to go up 9-7, the Griz defense didn’t allow another point until the final minute of the game. Those eight drives produced just 56 offensive yards for NAU.

Leading the defense was Connor Strahm, who had 15 tackles, 2.5 for loss and a sack. He was one of four players in double figures for tackles, including Josh Buss (11), James Banks (11, 1.0 sack) and Jesse Sims (10, 2.0 sacks). He also had an early blocked point-after attempt, which turned out to be huge as NAU was forced to go for a two-point conversion in the final minute of the game instead of a traditional PAT.

The defense totaled 95 tackles in the game, including 10 for lost yards. Seven of those were sacks. The Griz defense also had five pass breakups, a fumble recovery and an interception on a Hail Mary attempt on the final play of the first half.

“We wanted to try and make their quarterback beat us, and our guys did their jobs,” Stitt said. “Our defense was incredible. They made play after play and kept us in the game.”
The offense, without starting quarterback Gresch Jensen, did just enough to win, despite being limited to 218 total yards. Caleb Hill started the game under center, but after a three-and-out that resulted in 15 lost yards, Stitt elected to go with Makena Simis from the second drive forward.

Simis came to Missoula as a quarterback before being converted to a wide receiver. Prior to Saturday, he had taken only a handful of snaps under center this season, out of the wildcat formation.

“Makena was something else,” Stitt said. “Rushing for 100 yards, and after not playing the position for a couple years, I don’t know how many performances can match what this guy did.”

He led Montana on two scoring drives, the biggest coming late in the fourth quarter.

With 8:22 remaining in the game, Montana began a drive that only required seven plays but used up 4:07 off the clock. It concluded with a 34-yard field goal make by Brandon Purdy, giving Montana an eight-point lead.

A penalty on the ensuing kickoff allowed NAU to start its drive at the 45-yard line. The Lumberjacks were able to find the end zone for just the second time in the game 11 plays later, but needing a two-point conversion in order to send the game into overtime, quarterback Stone Smartt rolled to his right, and with no room to run, threw to an open receiver but off target.

The Grizzlies recovered the ensuing on-side kickoff and were able to take two snaps in victory formation.

“It was gritty, gutsy, shows the character of our football team,” Stitt said. “It wasn’t pretty at all, but it feels so good. “

More than 75 percent of Montana’s offensive plays were on the ground, led by Simis, who rushed for 101 of Montana’s 174 yards.

Trailing 9-7 and stalling on seven consecutive offensive drives midway through the third quarter, the offense got a boost from the defense. Following a Montana punt, NAU set up at its own 25-yard line, but on the second play from scrimmage, Banks forced a fumble that was recovered by Josh Sandry.

On the next play, Simis completed a 33-yard pass to Justin Calhoun – Montana’s only passing first down of the game. Two short runs later and Alijah Lee was in the end zone and Montana was on top. The Grizzlies wouldn’t trail again.

Louie-McGee’s 48-yard punt-return score was the big play, but that was one of just several plays for the sophomore. The versatile wide receiver caught five passes for 11 yards and rushed for 13 more. On special teams, he had three punt returns for 68 yards in addition to 54 kickoff return yards.

“We really did talk about special teams being a big part of this game,” Stitt said. “He’s Mr. Electricity, and any time the ball’s in his hands you just don’t know what’s going to happen. Any time he touches it, he can take it to the house.”

While Montana was using its fourth quarterback, NAU was also using a backup after starter Case Cookus was ejected in the first quarter for targeting. On a reverse play, Cookus went to lay a block, but did so helmet-to-helmet and was flagged and ejected.

Montana’s final two games will be in the state of Montana. The Grizzlies host Northern Colorado Saturday before the Brawl of the Wild vs. Montana State on Nov. 18 in Bozeman.