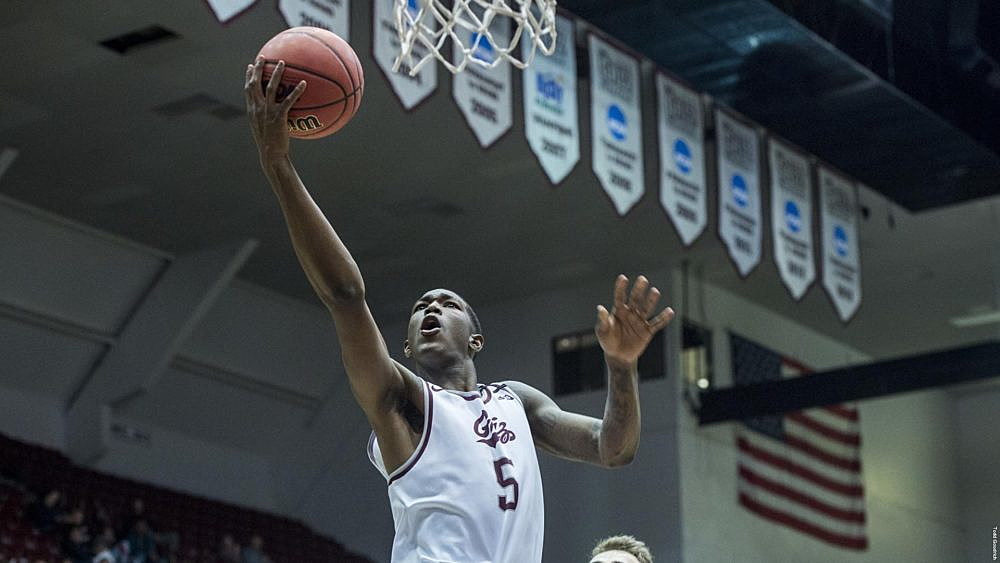 The Montana Grizzlies took an early lead Monday evening and held off a late comeback attempt by Oral Roberts to defeat the Golden Eagles, 69-64. The victory improves Montana’s record to 3-1 on the season. The Grizzlies will play either UC Santa Barbara (6 p.m. MT) or Pepperdine (8:30 p.m.) in the Legends Classic Malibu regional championship game on Tuesday.

“We finished and found a way to win,” head coach Travis DeCuire said. “I’m happy with our effort. I think we’re playing better basketball today then we were last week, in some areas. We just have to be more consistent.”

For the first 35 minute, Montana played some of its best basketball of the season, building a double-digit lead behind an aggressive defense.

After leading by double digits for the majority of the second half, and by as many as 14 points, Oral Roberts got hot from three-point range and trimmed a 58-46 deficit to just three points, 65-62, with 28 seconds to play.

The Grizzlies buckled down, though, making their final four free throws to ice the game. A struggle through the first three games of the season, Montana shot 17-of-22 (77.3 percent) from the charity stripe on Monday.

“Our maturity is our biggest question mark right now,” DeCuire said. “We had a lead and we just could not sustain doing all the right things and playing at the same level of intensity that we did to build the lead. That’s our Achilles heel right now.”

The Grizzlies were led by go-to guards Ahmaad Rorie (18 points) and Michael Oguine (14), but also got solid production from freshman Karl Nicholas, who had a career-most 11 points, four rebounds, two blocked shots and two steals. Nicholas made 5 of his first 6 shot attempts.

“We knew that if he could give us minutes he could be a factor on the glass, he could contest some shots,” DeCuire said. “I think the area of growth for him was off the ball – the scouts, the schemes, he’s in all of the right places, which is difficult for freshmen, especially post players.”

Nicholas saw 18 minutes of action, compared to just 25 total minutes over his first three games, mostly due to foul trouble.

The two teams were in a back-and-forth battle through the first 12 minutes before Montana closed the half on a 16-7 run and opened the second frame on a 9-2 stretch.

Of Rorie’s 18 points, 11 came in the first half. He also had six assists. Oguine had a team-high-tying six rebounds, along with Jamar Akoh, who chipped in eight points. Senior Fabijan Krslovic had nine points and five boards.

Montana was able to use a longer lineup, with 11 players seeing action, including seven players with 18 or more minutes.

For the majority of the game, Montana’s defense was stingy and caused problems for the Golden Eagles. ORU was limited to just 24 first-half points and turned the ball over 15 times thanks to an active defense that forced 10 steals plus four shot-clock violations.