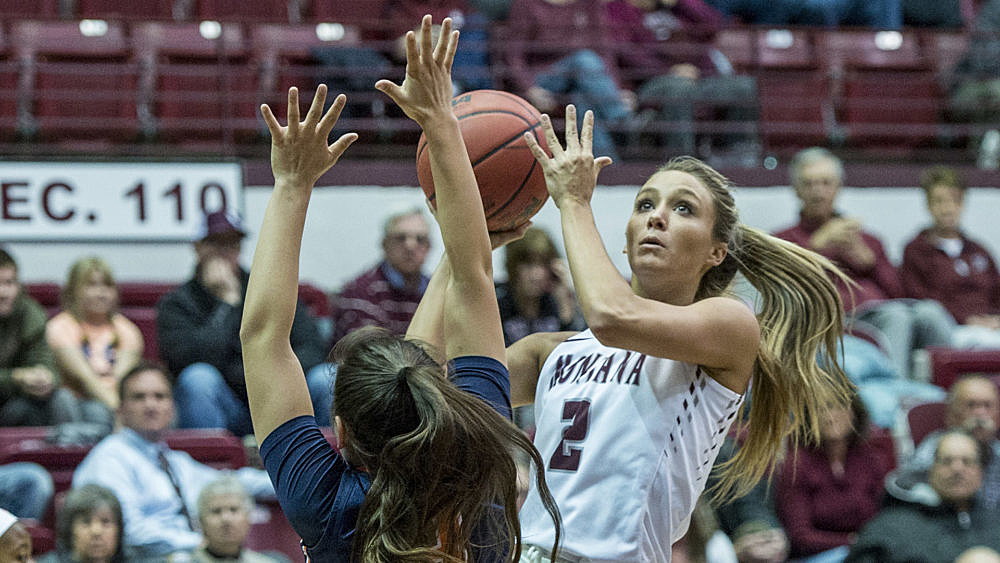 Montana raced out to a 19-2 lead after the first quarter and never looked back on Friday night, opening the 37th Lady Griz Classic with a 68-47 victory over Cal State Fullerton at Dahlberg Arena.

It was the first victory of the season for Montana (1-5), which went winless in November while facing a challenging lineup of opponents, including two nationally ranked programs.

“That was fun. The girls sure brought it tonight,” said coach Shannon Schweyen. “We had enthusiasm, we played good defense, and it was nice to have some shooting touch out there as well.”

The teams played 40 minutes, but the outcome was decided in less than a quarter, as the Titans (2-5) missed their first 14 shots. That allowed the Lady Griz to score the game’s first 17 points.

Montana led 19-2 after one quarter, then outscored Fullerton 20-11 in the second to build a 39-13 lead at the break. It was the first time this season the Lady Griz went into the half holding a lead.

As a result, Montana’s starters were able to play limited minutes — a plus with a matchup against Long Beach State on Saturday night — and the team’s bench was able to shine.

The Lady Griz reserves scored 44 of Montana’s 68 points, with Hailey Nicholson flirting with a double-double — 16 points and nine rebounds — and Taylor Goligoski scoring 11, 10 of which came in the first half on 4-of-5 shooting, when Goligoski showed flashes of her true self.

“We needed that out of her. It’s been exciting to get her back into the lineup and get her going,” said Schweyen. “I think she can finally breathe a sigh of relief that she got some good minutes. I know she feels like she finally did something good.”

It was Montana’s Malta connection that did the most damage to Fullerton’s chances. In addition to Nicholson’s big night, Sophia Stiles, who is worth the price of admission just to watch her fly around on the defensive end, had eight points, four rebounds and four blocked shots.

And remember: She’s a 5-foot-9 freshman.

“Sophie had an outstanding game,” said Schweyen. “The stuff she did on defense tonight was highlight reel. She reminds me of Kenzie De Boer on defense, how she can look like nothing’s there, then she’ll quickly recover and swat a shot out of the air.

“She’s got a bright future ahead of her. She’s just getting better every game.”

The same could be said of Nicholson, but whereas Stiles is emerging with experience, her former teammate at Malta High has it all right there. She just needs it coaxed out of her from time to time.

She had her best game of the season, to that point, against Marquette last week at the Cancun Challenge. The reason? She was angry. So Schweyen played a hunch and badgered her sophomore on Friday night as well before the game, trying to spark a little something.

Note to Schweyen: keep doing whatever it was you did. Nicholson, who can vanish on the court when she’s not engaged (not angry?), shot 5 for 10, hit all six of her free throws, grabbed four of her nine rebounds on the offensive end and collected two steals.

“That’s what we’ve been waiting for, because she can be such a prolific scorer and rebounder,” said Schweyen. “It’s nice to see her come alive. We need that from her if we’re going to have a chance to be a good basketball team.”

Fullerton outscored Montana 34-29 in the second half, but that was immaterial in a game whose outcome was decided before the third quarter began.

The Titans pulled within 17, 44-27, midway through the third quarter, but Henderson scored on a jump hook, Nicholson added a basket and Henderson hit a pair of free throws to make it 50-27, and Fullerton wouldn’t get closer than 19 the final 15 minutes.

McKenzie Johnston had nine points and six assists, and Emma Stockholm added seven points in 13 minutes off the bench. She was 2 for 19 from the arc entering the game, but she hit her only 3-point attempt and added a pair of baskets in the paint as well.

“Emma’s had a lot of good looks this season, but she’s been struggling from three. It was great to see her make one tonight,” said Schweyen. “And she had some nice little ones around the basket.”

In last year’s matchup against Fullerton, a 72-56 win for the Titans on their home floor, Daeja Smith came off the bench to score 11 points and grab 11 rebounds.

She had 17 points and 14 boards on Friday, both game highs, but unlike last season, she had precious little help. Her teammates shot 21.3 percent.

“I remember last year. She kind of took over the second half,” said Schweyen. “When she gets it, she has a good touch, so we were trying to not let her get any easy ones.”

All 10 active players for Montana saw at least 13 minutes of action and every player scored and grabbed at least one rebound.

“Everybody gave us a little something. It’s always nice to look in those columns and see everybody has a field goal and a rebound,” said Schweyen.

With win No. 1 under their belts, the Lady Griz will try to make it a Classic sweep when they face Long Beach (1-6) on Saturday at 7 p.m.

“We’ve got a tough Long Beach team tomorrow. It will be something completely new for us, which will be good. That’s what this part of the season is about,” said Schweyen.