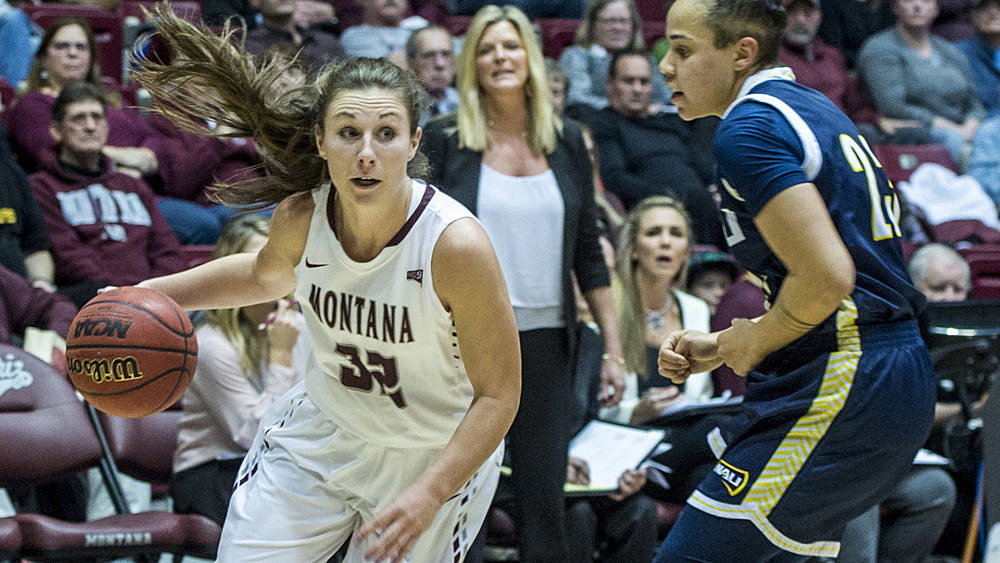 We interrupt your Christmas celebration to bring you additional glad tidings of great joy, this time from the city of Missoula.

Down 21 points midway through the third quarter to a confident Northern Arizona team, Montana rallied to force overtime, then pulled away in the final minute of the extra session to win 70-62 in the Big Sky Conference opener for both teams on Thursday night.

“It was just a ton of heart by these girls. They gutted it out, one play at a time and just chipped away and never stopped believing,” said coach Shannon Schweyen.

If the players believed, they might have been the only ones in the building who did after the Lady Griz (5-7, 1-0 BSC) fell behind by 19 points in the second quarter and twice by 21 in the third.

Montana hit just seven of its 35 shots in the first half, an ugly 20 percent, and put up little defensive resistance to fall behind 35-20 at the break. It was the latter that was more troubling than the former.

“We were obviously a little upset at halftime about the way we played the first half,” said Schweyen. “We gave up things we didn’t give up to Kentucky or Marquette. That’s what was disappointing to me. We gave them layups.

“I told them to go out there and play some Lady Griz defense and make them earn their baskets. They had too many easy ones in the first half. They were just blowing past us left and right.”

The defense may have been better early in the third quarter, but there was no way of knowing, not with the way Kenna McDavis was shooting.

She connected on three deep 3-pointers in the opening four minutes of the second half to put her team up 48-27. She scored again with 3:39 left in the period to make it 50-29.

There is no putting a finger on what, exactly, turned the game around. Was it Taylor Goligoski‘s 3-pointer late in the third quarter, a shot she hit after missing 11 of her first 12 to that point, that sparked some life into her right hand and her teammates?

Was it a Northern Arizona team under a first-year coach, which shot better than 47 percent through the first three quarters, coming unglued with things got tight and making just four baskets over the final 15 minutes?

Or was it the crowd of 2,662 that had mostly given up hope but was still waiting for something, anything, a miracle perhaps, to fire up the Dahlberg Arena magic?

“They were loud and they got into it at the right times,” said Schweyen. “It was fun. Everybody loves a comeback.”

Montana outscored Northern Arizona 11-2 to close the third quarter, then opened the fourth on a 9-0 run, with a 3-pointer by Goligoski at the 6:33 mark making it 52-47 and for the first time making it seem this might be doable.

“I’ve seen enough basketball games to know a big lead can go in a hurry,” said Schweyen, whose team gave up a 15-point lead in a road loss at Fresno State earlier this month. Northern Arizona rallied from a 15-point hole in the fourth quarter earlier this season to defeat Boise State in Hawaii.

It would take Montana more than 39 minutes before it got its first lead of the game. Goligoski hit her third 3-pointer of the second half to bring the Lady Griz within one, 56-55, with 1:57 left, then freshman Sophia Stiles, banged into misses all night long, finally finished through contact with 30 seconds left.

Her free throw made it 58-56. It was Montana’s first lead of the night.

But the game wasn’t over yet. McDavis banked in a 15 footer to tie it at 58-58, and Montana couldn’t get off a clean look before the end of regulation, sending the Lady Griz to overtime for the first time this season.

“We talked at the half that we’re going to shoot better than 20 percent,” said Schweyen, whose team went 15 for 35 in the second half while forcing the Lumberjacks (3-9, 0-1 BSC) into 15 turnovers in the second half and overtime.

“We are. This isn’t us. It was pure heart. They didn’t want to see it slip away. We had a pretty good group out there that made that run. It was fun to watch. We had some great stops, and the girls made some big, big plays.”

The biggest came in the final minute of overtime, which the teams entered tied 62-62.

Jace Henderson, who finally found space to operate in the second half, grabbed an offensive rebound and got the ball to Goligoski, who was fouled going to the basket with 52 seconds left. Her two free throws made it 64-62.

After another Northern Arizona turnover, McKenzie Johnston, 30 for 35 from the line to that point this season, got two free throws with 25 seconds remaining. Miss. Miss. “Everybody is human,” said Schweyen. “I know she was kicking herself, but she did so many other great things tonight.”

That gave Northern Arizona one more attempt to tie it. Or a chance for an unlikely hero to step up.

Madi Schoening finished 1 for 8 and played just 18 minutes behind Stiles, but she was on the floor in the final minute thanks to Schweyen following through on a hunch.

When Olivia Lucero tried to enter the ball to the high post with 18 seconds left, Schoening jumped the pass and knocked the ball forward to Johnston, who finished at the other end, then added a free throw to make it 67-62 and essentially end it.

Schoening’s was one of 15 steals for Montana on the night.

“We had some big steals tonight. Madi had the huge one, but everybody did their part,” said Schweyen. “I just love what this team did tonight. It shows me a ton.”

Johnston finished with 18 points on 50 percent shooting. When nothing was going right, she got into the paint with regularity in the second half, backing down her defender for short jumpers that got Montana scoring and gave life to the comeback.

“Kenzie was relentless. She put pressure on them all night long, taking it in there and scoring in the post,” said Schweyen.

Henderson and Goligoski both finished with 13 points, the former aided by the latter as Goligoski got going in the second half.

Montana went 1 for 16 through the opening nine-plus minutes of the second quarter. That allowed Northern Arizona to pack it in defensively on Henderson, who only got a single shot off in the first half.

When the baskets started coming in the second half, the NAU defense had to loosen up. That had Henderson facing a single defender more often than not. And she got to work.

“Taylor hit some big, big shots for us. I was happy for her, because we’ve been waiting for that. She hit some big threes when we needed them.”

McDavis finished with 18 points and 15 rebounds for Northern Arizona, but she went quiet when her team needed her the most. Lucero added 15 points and seven assists but also had six turnovers.