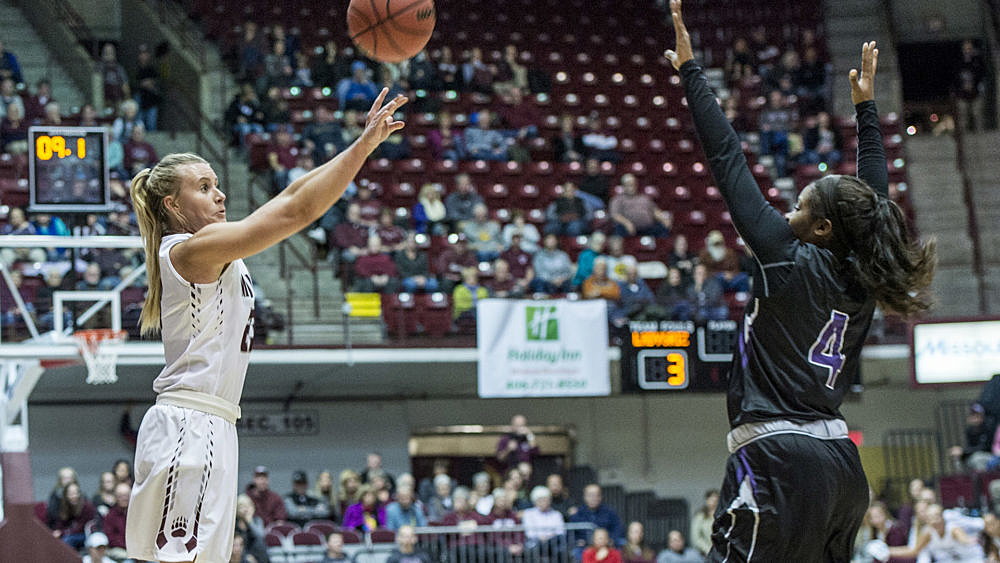 It’s not often a 40-minute game’s turning point comes less than six minutes in, and not often is it caused by a freshman, but that was the case in Montana’s 60-52 victory over Stephen F. Austin on Thursday night at Dahlberg Arena.

Her team plagued by four early turnovers and looking out of sorts against the Ladyjacks’ pressure, Lady Griz coach Shannon Schweyen inserted freshman Sophia Stiles into the lineup, and that move changed the entire narrative of the game.

What had been Stephen F. Austin’s early strength — its full-court press — was turned into its weakness by Stiles, as she assisted with three long passes in less than two minutes that led to transition baskets at the other end for the Lady Griz.

Montana (3-5) turned an early deficit into a 15-6 lead thanks to the spark provided by Stiles, and the Lady Griz led the final 35 minutes to win their third straight and hand Stephen F. Austin (6-2) its first loss since the Ladyjacks fell at Kansas State to open the season.

“That was definitely the big turning point in the game. We were struggling, then all of a sudden we’re getting easy shots, and we’re making them,” said Schweyen. “It’s always nice when you go over the top of the press, then bury your shots at the other end.”

Stiles, who played a season-high 26 minutes, would finish with five assists as Montana had dimes on 17 of its 24 made baskets while shooting 43.6 percent to match a season high.

“She was just the human press breaker tonight. She made heads-up plays all night long,” added Schweyen.

Hailey Nicholson scored 16 points on 8-of-12 shooting and Taylor Goligoski and Jace Henderson both added 10 as Montana built a 32-21 halftime lead, went up 16 late in the third quarter, then held off Stephen F. Austin in the fourth, when the Ladyjacks three times cut their deficit to eight.

“The girls played hard and they competed. It was fun to watch,” said Schweyen. “That’s a good basketball team we beat. They haven’t been on the road a whole lot, so I think being in a hostile environment was new for some of their young kids.”

Stephen F. Austin, which played Kansas State in its opener and a good South Dakota team last weekend, with not much in between, was an unknown based on its season results.

But Montana played the Ladyjacks to an eight-point game last year at Nacogdoches, Texas, holding them to 54 points on their home floor. With more shooters on this year’s team, the Lady Griz defended with 40 minutes of man.

“Even though they struggled against zone last year, they have better shooters this year. We manned them the whole ball game, because we didn’t want to let them get any easy looks and get going,” said Schweyen. And they never did.

Montana held a team that was scoring 80 points per game to 52, on 4-of-19 shooting from the arc, and forced them into 21 turnovers, a season high for the Lady Griz defense.

That helped offset 21 turnovers by Montana, only a few of which proved costly as Stephen F. Austin could only turn those into 13 points.

It was the most turnovers Montana has committed this season, but they came against a team ranked fifth nationally in forcing them, at more than 25 per game.

“They got 21 out of us tonight, which is more than I’d like to see, but overall we did a nice job against that press,” said Schweyen. “They usually get a lot of points off that.”

After Stiles entered the game in its sixth minute, she immediately made the Ladyjacks pay for loading up Montana’s backcourt, going long — with confidence — to Nicholson for an easy basket.

She set up Goligoski for an open jumper less than a minute after that, then Nicholson not long after that.

A team that looked timid against Stephen F. Austin in the opening minutes was now on the attack, thanks to Stiles.

“She just shredded that press, both off the dribble and with her passing,” said Schweyen. “She created some nice scoring opportunities for people. She made some great reads.”

Nicholson scored 10 of her 16 points in the first half and sent her team to the locker room with a 32-21 lead.

Stephen F. Austin went on the aggressive offensively to open the third quarter and twice cut its lead to seven, the second time at 40-33.

“They started to get some actions where they were slipping screens and we weren’t quite getting the right angles,” said Schweyen. “They battled and made a good run at us. I like the way our girls responded. They kept answering.”

After Chanell Hayes pulled the Ladyjacks within 40-33, Henderson turned a crosscourt turnover into a breakaway layup. Stiles scored inside, Nicholson hit a jumper and Goligoski drilled a 3-pointer to cap a 9-0 run that made it 49-33.

Stephen F. Austin never went away but also never did enough to really put the outcome in doubt in the fourth quarter either.

“It was a fun basketball game,” said Schweyen, who hasn’t been able to say that after many of the 38 games she’s coached the last two seasons. Now she has a team that’s getting on a role, thanks to a deep list of contributors.

Henderson, the face of Montana’s turnaround this season, coming on as she has out of nowhere, added four steals to go along with her near double-double of 10 points and nine boards, all while playing 38 minutes.

“She’s doing such a good job rebounding. She’s been close to double-doubles, and she’s shooting 50 percent, which nobody else on our team is doing,” said Schweyen.

“She comes out of crowds with rebounds and is making good decisions right now. She’s been doing nothing but good things for us.”