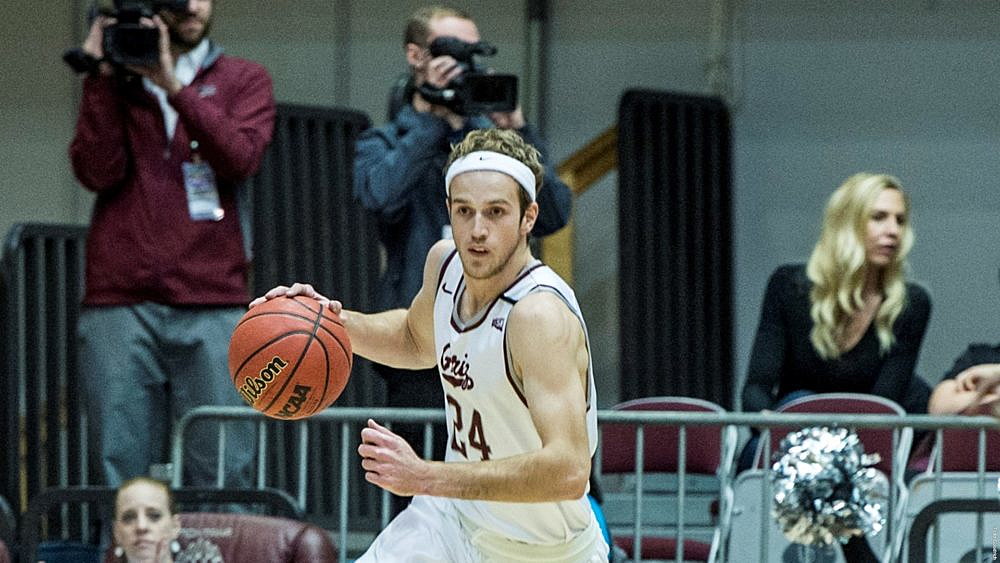 At times, the Montana men’s basketball team has shown defensive tenacity and solid production on offense. Other times, the Grizzlies have gone through lapses, allowing opponents to go on large scoring runs. Montana has potential, but is searching for consistency as it enters the final week of non-conference play.

After beginning the year with back-to-back wins over Whitworth and Pitt, Montana has alternated wins and losses in its following games. It’s hard to blame the Grizzlies for being out of synch at times. The Grizzlies have already traveled more than 11,500 miles – taking two trips to the East Coast and three flights to the state of California. On their last trip, they had one game canceled due to wildfires, only to have its next game nearly canceled due to snow.

This week, Montana finally has the opportunity to play back-to-back home games for the first time all season, hosting UC Riverside on Sunday afternoon and UC Irvine on Tuesday. The Grizzlies are unbeaten at home this season, and are relishing the opportunity to get into a routine and play on their home floor.

“It’s an opportunity to get in front of our fans, play at home, sleep in our own beds,” head coach Travis DeCuire said. “We just haven’t had a lot of those opportunities with so many games being on the road. And you want to go into conference with some momentum. If we can get a little streak going, or get two out of three or something like that, I’d feel pretty good about it.”

After returning from Atlanta on Sunday, the team was able to take three full days off to rest, rehab and prepare for final exams. The team got back onto the court on Wednesday and is in the midst of four consecutive days of practice before hosting the Highlanders on Sunday.

How rare has the full week at home been for the Grizzlies? During the first 30 days of the season, Montana was on the road for 19 of them.

Following their season opener on Nov. 10, they were on an airplane nine hours later flying to the state of Pennsylvania for a six-day trip. After back-to-back games against Power-5 teams, the Grizzlies had two practices at home before flying to California to continue the Legends Classic.

The Grizzlies then had two practices in Missoula to prepare for Carroll, but just one the following day before traveling to Stanford. After getting home from that trip, it was two quick practices before hosting CSUN, then one more before hitting the road for six days again.

DeCuire won’t let his team use the chaotic schedule as an excuse, but is excited to see how his team responds after having some regularity this week.

“We should see some growth,” he said. “When your day isn’t consistent, sometimes your play isn’t consistent. We’ve seen a lot of intensity this week, so I’m excited to see them put it on the floor under the lights.”

The words consistency and intensity come up frequently when talking with DeCuire, which is why it comes as no surprise that the biggest need for his team, according to the head coach, is “consistent intensity.”

UC Riverside’s trip to Missoula is a return trip from a year ago, when Montana defeated the Highlanders in Riverside. Ahmaad Rorie had 25 points in the eight-point win, while Sayeed Pridgett had 10 points and three blocked shots. The Grizzlies shot 65 percent in the second half, and their defense limited the Highlanders to 36 percent shooting overall and forced them into 22 turnovers.

More so, it began a stretch of seven wins in an eight-game period, including a 5-1 start to conference play.

UC Riverside is 3-6 on the season, most-recently snapping a four-game skid with a win over Air Force. The Highlanders have three players in double figures, led by Dikymbe Martin, who averages 12.7 points. In last year’s meeting, Chance Murray had 15 points for UC Riverside. He’s UCR’s second-leading scorer (10.8), and ranks first for steals and second for rebounds and assists.

“They’ll be physical in the middle,” DeCuire said. “He’ll (Larsson) be physical and tough to defend in the paint. He’s a good scorer around the basket.”

UC Riverside has played 40 minutes of zone the last three games, so it will be important to play at a quick pace.

“We need to find ways to get in transition, attack the zones and get down the floor before they get set,” DeCuire said.

Two strengths of Montana have been rebounding and forcing turnovers. The Highlanders rank 327th nationally with 16.3 turnovers per game and a -3.4 turnover margin, compared to a +4.6 for Montana. UC Riverside collects boards – 39.1 per game, compared to 35.0 for Montana – but is also allowing 40.5.

One area to keep an eye on will be three-point shooting. Both teams have struggled from long range this season. However, while UC Riverside has struggled offensively, its opponents are shooting just .283 from beyond the arc (14th in NCAA).

Sunday’s game is Youth Day, with all children 12 and under admitted for free with an accompanied adult. There will also be free photos with Santa Monte at halftime.

SERIES VS. THE HIGHLANDERS
Sunday will mark the sixth meeting in the past 13 seasons between Montana and UC Riverside. The Grizzlies hold a 4-1 mark, winning the last two in the series. Montana is also unbeaten at home vs. the Highlanders, winning in 2006-07 and 2009-10.

In last year’s win at Riverside, Ahmaad Rorie led all players with 25 points. Sayeed Pridgett was also in double figures with 10 points and three blocks. Montana shot 65 percent in the second half and held the Highlanders to 36 percent overall, also forcing 22 turnovers. The victory started a stretch of seven wins in an eight-game period for the Grizzlies.

While playing at Cal State Fullerton, Jamar Akoh played against UC Riverside several times, including a season-best 12 points and eight boards as a freshman in 2015 and 10 points and five boards in the Big West quarterfinals.

AKOH TAKING OVER
The Grizzlies had high hopes for Jamar Akoh, a transfer from Cal State Fullerton who redshirted a year ago. In his first two games, however, he combined for just four points and two rebounds, being limited to 28 total minutes due to foul trouble.

Since those first two games, Akoh has begun to take over down low, averaging 11.1 points and 7.0 rebounds, shooting 59.2 percent. He has five double-figure scoring games during that seven-game span, including a double-double with 16 points and 10 boards vs. Carroll (Nov. 26).

NARROW DEFEATS
Montana holds a winning record, but also feels as if it has let some other games slip away. Of Montana’s four losses, it has led or been within a possession late in the second half.

STRONG NOVEMBER
The first month of the season was – all in all – a success. Montana posted a 4-3 record, marking the team’s first winning November since 2011-12. For comparison, Montana was a combined 6-16 in the previous four Novembers.

Even more impressive, the Grizzlies are having success against much stronger competition, already playing five games away from Missoula and three against Power-5 competition.

“We’re sitting in a good spot going into December,” Travis DeCuire said at the time. “I am happy with where we’re at, but we have to be a better basketball team. Two of our three losses, we walked away feeling like we should have won, and one of them we felt like we could have won. If we execute better and make fewer mistakes offensively, we have the chance to be a pretty good team.”

INTO DECEMBER
The Grizzlies followed up a strong November with a win to begin the month of December. At 5-3, it was the program’s best eight-game start since 2010-11. A win on Wednesday would not only be a signature victory over a ranked opponent, but it would also be the team’s best nine-game start since 2009-10. The Grizzlies won 20-plus games and played in the postseason in both 2010 and 2011.

ALL-AROUND RORIE
Ahmaad Rorie played in all 40 minutes vs. UC Santa Barbara and ranks 18th nationally for minutes played per game. He also ranks highly, however, for points (18.4per game) and steals (1.8 per game). In fact, Rorie is one of 13 NCAA Division I players to average at least 18.0 points per game and total 16 or more steals.

FORCING TURNOVERS
Montana has forced more turnovers than its opponents in seven of nine games, tying Penn State with 15 turnovers apiece in another. The advantage has led to a +5.3 turnover margin (24th in NCAA). On two occasions, Montana has forced 20 or more turnovers in a game, and in a win at Pitt (Nov. 13), the Grizzlies forced the Panthers into 19 turnovers, converting them into 30 points – an average of 1.58 points per turnover.

CRASHING THE GLASS
Montana has out-rebounded its opponents in seven of its last eight games, which is particularly impressive considering three of those contests have come against Power-5 teams. Well over one-third of Montana’s rebounds have come from the offensive end (37.4 percent). That number was 28.6 percent a year ago.

Michael Oguine, tied for UM’s leading rebounder, has more offensive boards (27) than defensive (24), as does freshman Karl Nicholas (16 to nine). Over their last five games, the Grizzlies have out-rebounded their opponents 72-37 on the offensive glass. They are averaging 13.11 offensive rebounds per game this season (35th in NCAA). Nearly one-fifth of Montana’s points have been second-chance opportunities (125 points; 19.3 percent).

DYNAMIC DUO, PART I
Junior guards Michael Oguine and Ahmaad Rorie enter Sunday’s contest each averaging more than 16.0 points per game, both ranking in the top 250 of all NCAA Division I scorers.

Oguine has scored in double figures in all nine games, while Rorie has accomplished the feat eight times – including 20-plus on four occasions. Montana is one of 32 Division-I teams nationally to have two scorers averaging 16.0 points or more per game.

WELL CONDITIONED
Montana has three players who rank among the top 75 for minutes played. Ahmaad Rorie is averaging 37:00 per game, including all 40 vs. UC Santa Barbara (Nov. 21). Fellow juniors Michael Oguine (35:13) and Bobby Moorehead (34:53) are also among the nation’s leaders. In fact, Montana is one of 10 Division-I schools nationally to have three players average 34:00 per game or better (also: Arizona State, Duquesne, George Mason, Holy Cross, La Salle, Mt. St. Mary’s, Ohio, Santa Clara and Toledo).

LOOKING AHEAD
For the first time this season, Montana will play back-to-back home games. The Grizzlies will host UC Irvine on Tuesday evening, before traveling to Washington to close the non-conference portion of their season.

Prior to Tuesday’s game, Montana will celebrate former Griz Delvon Anderson, who passed away in August. His family will be in attendance and will receive an award on his behalf.