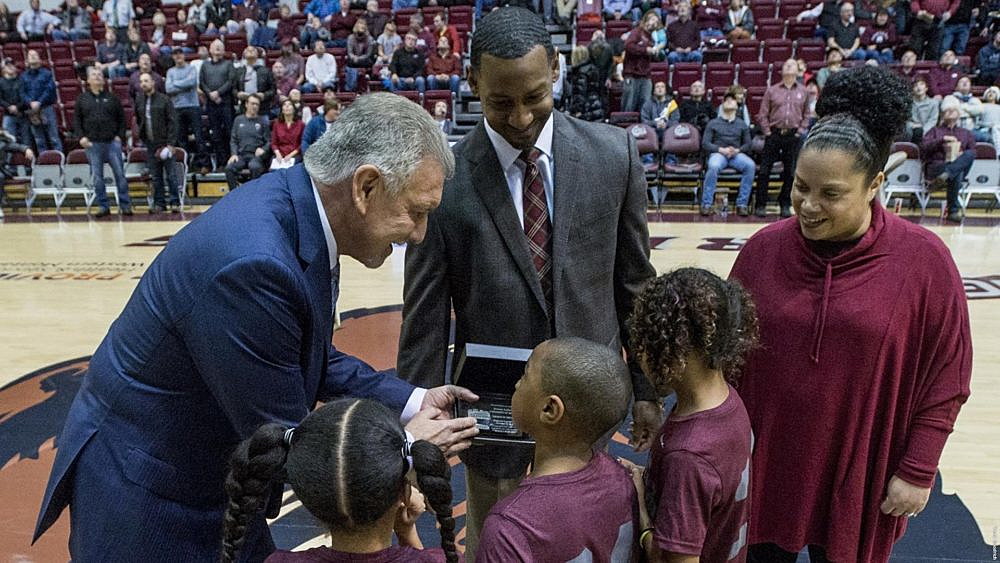 On an emotional night that saw the return of former coach Blaine Taylor and a pregame presentation celebrating the life and career of Delvon Anderson, Montana put together its best basketball of the season, defeating UC Irvine, 86-68. The 18-point victory matches Montana’s largest of the season and improves the Griz to a perfect 5-0 at home.

With the win, Montana is also guaranteed a winning non-conference record for the first time since 2011-12, a feat especially impressive considering the level of competition Montana has faced.

Two nights after he set career highs with 17 points and 12 rebounds, junior Jamar Akoh elevated his game another notch, scoring 23 points on 7-of-12 shooting. He also had seven rebounds, three assists, a steal and a blocked shot.

Akoh continues to get better each game as a Grizzly, but another player who had a career night was freshman Timmy Falls. Playing a career-high 22 minutes off the bench, Falls was a perfect 4-of-4 from three-point range, totaling 14 points. He also had a couple no-look passes that brought the largest crowd of the season to its feet, and took a charge on defense.

“We expect it from him,” DeCuire said. “I think he was tuned in and had a good practice yesterday. Sometimes as a freshman, it’s very difficult to accept new roles. For him to bounce back right now, going into Christmas break, is huge.”

Falls entered the contest with just 12 points all season.

On the glass, Montana out-rebounded the Anteaters, 37-29. UC Irvine entered the night ranked No. 2 nationally for rebounding and had been out-rebounded just twice this season. Their 29 rebounds were a season low.

“Shoutout to Brandon (Ronan), our strength coach,” DeCuire said. “I definitely think we’re stronger, and I think the biggest difference for us is the fact that we’re rebounding by committee. We’re not getting broken down by penetration, but we’re keeping guys out of the paint and are forcing them into bad shots.”

Fifteen of Montana’s 37 boards were on the offensive glass, continuing a season-long trend. The Grizzlies converted those into 19 second-chance points. The Griz also had 19 points off of 15 UC Irvine turnovers.

Montana used a 13-4 run midway through the first half to gain some separation, and led by 10 at the break, despite getting just six combined points from its top-two scorers on the season. Michael Oguine scored 12 points in the second half to finish with 16, while Ahmaad Rorie chipped in with eight, in addition to a team-high four assists.

Rorie had four points and an assist and Oguine had seven points and a steal during an 11-0 Grizzly run that pushed the lead to 19, 52-33, with 14:28 to play. Montana would lead by as many as 23 and never by fewer than 15 from that point forward.

Prior to the game, the Grizzlies recognized former player Delvon Anderson, who passed away in August at the age of 47. His family was on the court during a video ceremony and DeCuire and Taylor presented them with the Legend of the Game plaque – an award given to a former player or coach from each participating team in the 2017 Legends Classic tournament.

“In all honesty, after the ceremony I was ready for the night to end,” DeCuire said. “It took a lot of energy to get to this point today, and I think it did the same to Blaine. But it was a meaningful moment. It meant a lot to me and I think our program to be able to celebrate someone who hasn’t been celebrated, and someone who played a very meaningful role to this program.”

DeCuire and Anderson played together in the early 1990s and Taylor was their coach. He is Montana’s winningest coach in school history (.680 winning percentage) and is now an assistant coach at UC Irvine. During Anderson’s two-year career at Montana, the Grizzlies won back-to-back Big Sky Conference championships. He was the conference MVP as a senior in 1992.

Next up, the Grizzlies will prepare for their non-conference finale at Washington. The Huskies lost No. 1 overall NBA Draft pick Markelle Fultz from last year, but have already matched last year’s win total from the entire season, sitting at 9-3. Tipoff is slated for Friday at 9 p.m. MT on the Pac-12 Network.

“The way we’ve played the last two games, I’d take it,” DeCuire said of his team’s steady rise. “We know what we want to do defensively. We don’t have a lot of things to change or tweak, we just need to continue to get better.”