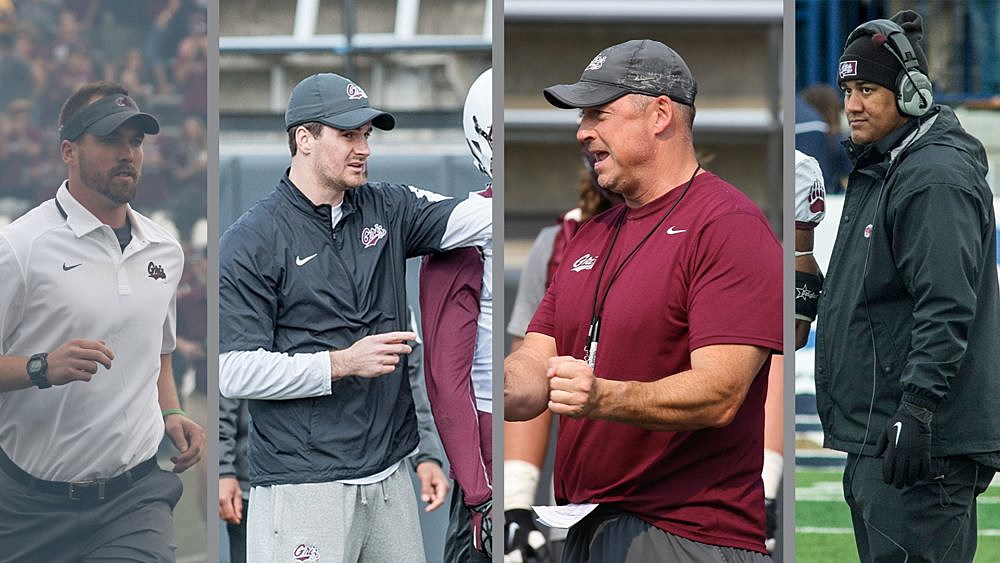 Three of the four coaches retained either played for or coached alongside Hauck during his first tenure with the Griz, keeping a strong Montana contingent amongst his staff.

“I’m excited to be able to retain three individuals with deep ties to myself, the University, and the state of Montana,” said Hauck.

“The entire staff brings a wealth of experience and expertise in their respective areas, and I’m excited they have agreed to come on board.”

Longtime Hauck assistant and current offensive line coach Chad Germer will remain in Missoula, as will running backs coach and recruiting coordinator Justin Green and safeties coach Shann Schillinger. All three are former Griz players who have returned to coach at their alma mater.

Germer, a former All-America center for the Grizzlies in 1991, coached with Hauck at UM in 2009 and UNLV from 2010-2014 before returning to Missoula in 2015. Since then he has coached five All-Big Sky lineman, including two-time all-conference tackle David Reese, UM’s only first-team selection in 2017.

“Chad brings great experience to the offensive line,” said Hauck. “We’ve known each other and worked together for a long time. Offensive line coaches with his pedigree are very hard to find and to have his knowledge and experience is a huge benefit to our program.”

Former Grizzly running back Justin Green returns for his eighth season coaching at his alma mater in 2018, leading the running backs and serving as the recruiting coordinator. Green played for the Griz under Hauck from 2003-04 before going on to a four-year career in the National Football League. Since taking up coaching, Green has mentored stalwart backs like Jordan Canada the Nguyen brothers and Jeremy Calhoun.

“Justin has done an outstanding job with the running backs since moving into the coaching ranks,” said Hauck. “I’ve also watched him grow into one of the best recruiters on the west coast, and know he will continue to do a great job.”

Shann Schillinger is another of Hauck’s former players who will return to the coaching staff in 2018. He was a standout safety for the Griz from 2005-09 and was selected in the sixth round of the 2010 NFL draft by the Atlanta Falcons. Before returning to UM in 2016 as a safeties coach, Schillinger coached at Dickenson State and Nebraska under former UM assistant Bruce Read and head coach Mike Riley.

“Shann is very accomplished for a guy his age. I’ve had my eye on him as a potential coaching prospect since I was in his house recruiting him as a senior in high school. He’s not only a great young coach, he’s also one of the best people I’ve ever met,” said Hauck.

Nicholson will enter his fourth season as the Grizzlies’ strength and conditioning coach next year. Before arriving in Missoula in 2015, he spent two years at Colorado School of Mines and three years as an assistant at his alma mater, the University of Houston.

“Matt has done a nice job over the last three years and has helped build some quality athletes,” said Hauck. “I look forward to working with him and utilizing the weight room and our offseason program to develop toughness in the ranks.”

Hauck also expressed his gratitude for the staff members he was not able to retain to this point.

“Last year’s coaching staff at UM was filled with talented football coaches and quality individuals. I know all of them personally, and I wish there were a way to retain everyone, but that’s not the way the business side of this works,” said Hauck.

“As an alum and as the new head coach, I truly appreciate their efforts during their time here at Montana, and we wish them the best in their future endeavors.”

Hauck will announce additional staff members in the near future.