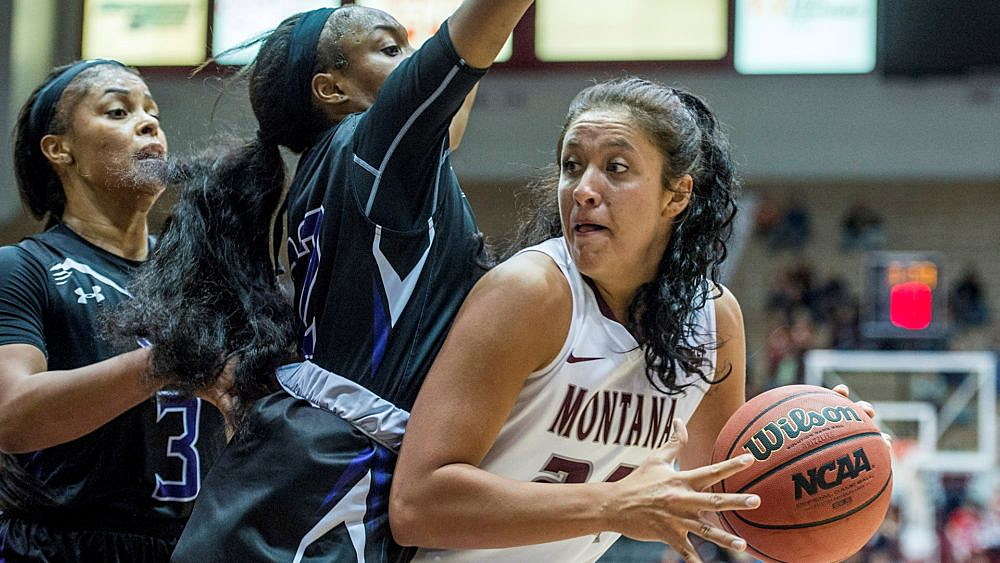 The Montana women’s basketball team played a nearly perfect first half at Fresno State on Sunday and took a 32-17 lead to the locker room. But a question lingered: What would Candice White, who had just two points at the break, do in the second half?

The answer: Plenty. White scored 16 of her game-high 23 points in the third quarter to shoot her team back into it, and her teammates made the plays in the fourth as the Bulldogs pulled out a 61-58 victory at FSU’s Save Mart Center.

It was a disheartening outcome for a team that did enough to win but still lost its 20th straight game away from home.

“That’s a tough one to lose,” said coach Shannon Schweyen. “We weren’t in a lot of close games like this last year, so I think the girls will learn a lot from this.

“You can’t ever relax when you get ahead. You have to keep battling and put people away when you can.”

For 20 minutes, Montana looked as good as it’s looked in a long time. The Lady Griz were sharp offensively and shooting above 40 percent, with nine different players putting up points.

Taylor Goligoski knocked down a 3-pointer early in the second quarter to make it 20-11, and Madi Schoening and Nora Klick hit triples in the final minute of the first half to make it 32-17 at the break.

Just as impressive was Montana’s work on White, who entered the game averaging 17 points per game, with 34 coming last weekend in a game against Cal State Northridge.

White was limited to two quiet points, hitting a pair of free throws and going 0 for 2 from the field.

“We talked in the locker room that 15 points is nothing. They’re better than they showed, and they’re going to come out fired up,” said Schweyen. “They’re at home and not wanting to lose this game.

“We talked about coming out the first five minutes of the second half and setting the tone, and we didn’t do that. They set the tone. They were the aggressor.”

It took White less than two and a half minutes to score six points and the Bulldogs a little more than seven to cut their deficit to four, 41-37.

White outscored Montana 16-13 for the quarter, with the Bulldogs, who shot 70 percent in the third and hit nine of their 10 free throws, outscoring the Lady Griz 26-13.

Montana shot 28.6 percent for the quarter, 21.4 percent in the second half.

“It was a tale of two halves. We started out and had the hot hand. Then it kind of flipped in the second half and they got it going,” said Schweyen.

“We knew White was going to try to take things over and get going. We wanted to keep trying to make it tough for her. But the third quarter was rough. She got clicking a little bit and got her crew involved.”

Montana still held the lead going into the fourth quarter, but it felt tenuous, and Fresno State evened the score at 45-45 on an Aly Gamez drive to the basket early in the final period.

Jordanna Porter, who would hit the shot of the game later in the fourth, connected on a 3-pointer to put the Bulldogs up 48-47 two minutes into the period, their first lead since early in the first quarter.

And still Montana hung in. Schoening hit a pair of free throws, then hit one of two when Fresno State coach Jaime White was whistled for a technical foul. Two more free throws by Hailey Nicholson made it 52-48.

The Lady Griz had a chance to extend their lead, but a close-range shot was off, as so many in the second half were, when the game was there for the taking.

“We missed a ton of shots in the paint,” said Schweyen. “We reminded them that they were playing on the road and that things were going to be a little tougher, and that they needed to show toughness today.

“I thought we competed hard. Unfortunately, we were a couple of baskets too short. It was disappointing we couldn’t pull that one out.”

Gamez got to the basket for an and-one to pull Fresno within one, and White did the same thing on the Bulldogs’ next possession to put them up 54-52. Montana would not lead again.

“We talked about always knowing where she’s at. We didn’t want her to get anything easy,” said Schweyen of White.

“We lost track of her a little bit too much, and she makes you pay. She puts the ball down and creates her own shot well.”

After Maddi Utti made it 56-52, Goligoski brought Montana within two with a jumper, and McKenzie Johnston tied it for the final time with a pair of free throws, evening the score at 56-56 with 2:38 left.

White — who else? — hit a baseline jumper on Fresno’s next possession to give her team the lead for good, and Porter connected on a 3-pointer with 1:38 remaining to make it 61-56.

The game should have been over when Montana came up empty on its next two possessions, but three Fresno State turnovers in the final minute kept things interesting.

Goligoski hit a pair of free throws with 11 seconds left to trim the margin to 61-58, and Montana was given new life when a moving screen on the ensuing inbounds pass gave the ball back to the Lady Griz.

With Montana needing a 3-pointer to tie it, Fresno shut down the arc. Sierra Anderson got the ball on the wing, but she found little daylight, and her last-second 3-pointer was blocked.

“We were looking at an on-ball fade screen and hoping we might get a look at that,” said Schweyen. “They covered it pretty well. It was a good job by them.”

White scored 23 points and added eight rebounds and three assists. She went 6 for 11 from the field and 9 for 9 from the line, where she is now 39 for 39 for the season. Gamez added 13 points.

Nicholson led Montana in scoring for the second straight game with 10 off the bench. Goligoski added 10, and Jace Henderson finished with eight points and a career-high 11 rebounds.

The Lady Griz went 16 for 18 (.889) from the line, their fourth straight game above 72 percent, and turned the ball over just nine times. So there was plenty to like, even if the outcome wasn’t what they wanted.