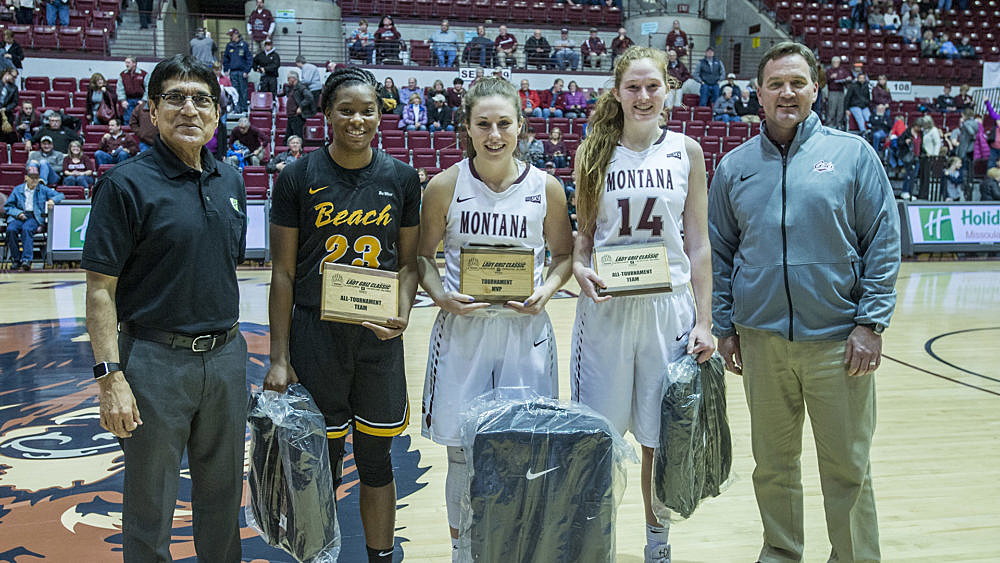 Montana didn’t win the 37th edition of the Lady Griz Classic — actually, no team trophy was presented after Oral Roberts and Montana both finished 2-0 — but it may have taken away something even more valuable than a piece of hardware: validation.

After opening the season 0-5 while playing one of the more demanding November schedules in program history and being competitive through most of it, Montana made it two in a row with a hard-fought 67-60 victory over Long Beach State on Saturday night at Dahlberg Arena.

“This weekend was just huge for the morale of this team,” said coach Shannon Schweyen, whose squad defeated Cal State Fullerton 68-47 on Friday night for its first win of the season.

“You want the kids to feel good about what they’re doing. Even if you play well in a loss, it doesn’t always show up. It’s just rewarding for these kids. It’s great to see them finally get a couple of Ws.”

With a predetermined schedule, the Classic left both Montana and Oral Roberts, which looked impressive in defeating Long Beach State on Friday and Cal State Fullerton on Saturday, unbeaten.

No MVP was awarded either, but McKenzie Johnston would have had a solid argument for it after playing all 40 minutes on Saturday against the 49ers, who forced the Lady Griz into three turnovers in their first five possessions and 19 for the game.

Sure, she had eight turnovers, a total she admitted to her coach was way too many, but she more than made up for it with 24 points, nine rebounds, six assists and three steals.

“Kenz just had a monster game. She had no break, and that’s not an easy team to go against for 40 minutes. You’re going to have some mistakes,” said Schweyen.

Johnston made the all-tournament team, as did Hailey Nicholson, who averaged 12.0 points and 8.5 rebounds in the two wins while shooting 50 percent.

Montana jumped out to a 19-2 lead after the first quarter in its win over Fullerton on Friday night. It didn’t take long for the crowd of 2,455 to determine that Saturday was going to be different.

Off the opening tip, Long Beach freshman Shanaijah Davison — the 49ers started four freshmen — attacked the basket and did in 11 seconds — score two points — what it took the Titans nearly a full quarter to do on Friday night.

On the other end, Montana had two turnovers on its first two possessions, a sign of things to come.

“It feels like an ugly win, but we’ll take it,” said Schweyen. “They definitely throw a lot of different things at you and don’t let you make easy passes.

“They get you a little bit out of sync, and that led to us having too many turnovers. All in all, I’m just happy to get out with a win.”

With Montana playing zone to minimize Long Beach’s ability to go to the basket, the 49ers showed they could play the long game as well, hitting a pair of 3-pointers late in the first quarter to go up 19-13 at the end of the first period.

Another triple by Cecily Wilson, Long Beach’s lone selection to the all-tournament team, early in the second quarter put the 49ers ahead 22-15.

“We started zone, thinking they’d put it down and get to the hole too easily. We were hoping to contain them a little bit, but they knocked down outside shots,” said Schweyen.

That would be Long Beach’s largest lead of the game as Montana took control the final seven minutes of the first half, outscoring the 49ers 20-2 to build a 35-24 advantage.

Long Beach’s fourth 3-pointer of the first half just before the buzzer made it 35-27 at the half.

But it was far from over. Long Beach State went ahead 47-46 late in the third quarter and 51-50 early in the fourth on another basket by Davison, who led the 49ers with 19 points.

Montana was on the wrong end of the luck spectrum for much of November. The Lady Griz finally got a fortunate break of their own on their next possession, when Madi Schoening banked in a 3-pointer from the left wing.

Sierra Anderson added another triple with 5:08 left to make it 56-51, and Montana would lead by three of more down the stretch.

“Madi’s was a big bucket. We were struggling to get good shots at that time, and then Sierra banged a big three for us, which was great,” said Schweyen.

“(Madi’s) was a little bit of luck, but we had a bunch of those go against us earlier this year. It was nice to get a few going our way.”

Johnston hit a career-high four 3-pointers and displayed a confident mid-range game as well. She was joined in double figures by Jace Henderson, who continues to impress.

She played 36 minutes and only took four shots, but she finished with 11 points and six rebounds, plus three steals, two assists and a blocked shot. In other words, she is getting major minutes because she just doesn’t do anything to hurt her team.

“Jace has become a good presence in there for us,” said Schweyen. “She came up with some big, big rebounds. In games like this, when the ball is bouncing around and you’ve got kids who are quick to the ball, to come out of there with those boards is huge.”

Schoening and Nicholson both finished with eight points, Anderson added six as Montana shot 38.9 percent and was +4 on the boards.