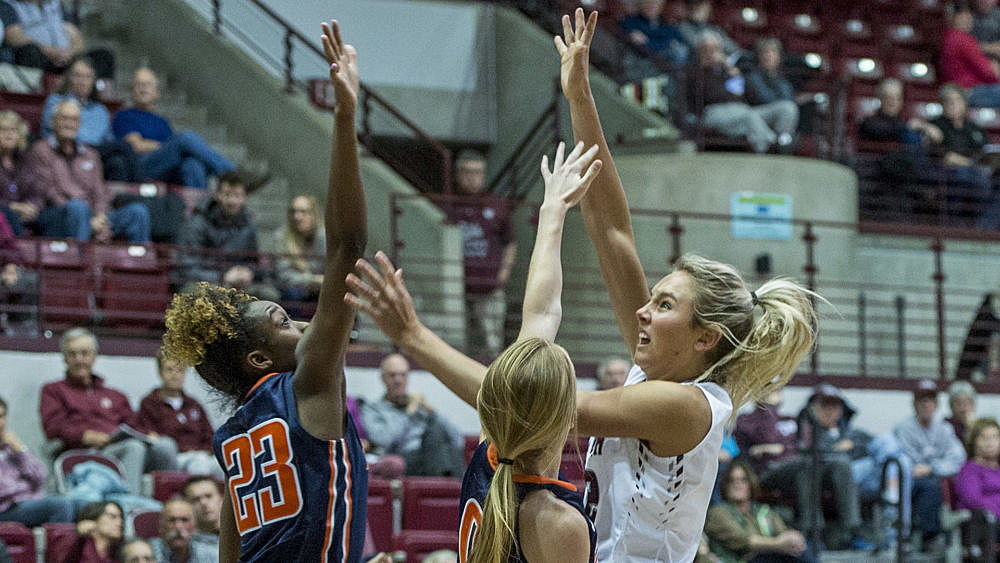 The Montana women’s basketball team, on just its third two-game winning streak since the start of the 2016-17 season, will try to make it three straight when it hosts one-loss Stephen F. Austin this week.

The Lady Griz (2-5) and Ladyjacks (6-1) will play at 7 p.m. on Thursday at Dahlberg Arena to wrap up Montana’s three-game home stand that opened last week with wins over Cal State Fullerton and Long Beach State at the Lady Griz Classic.

Montana will play at Fresno State on Sunday before returning home for its final pre-Big Sky Conference games, against Seattle and Rocky Mountain.

* A win on Thursday would give Montana three consecutive victories. The Lady Griz have not won three straight games since February 2016.

* Montana won its first game of the season on Friday, racing out to a 21-2 lead on its way to a 68-47 victory over Cal State Fullerton behind 16 points and nine rebounds from Hailey Nicholson off the bench.

* In Saturday’s 67-60 victory over Long Beach State, Montana built an 11-point lead in the second quarter, fell behind in the third and took the lead for good with six minutes remaining in the fourth. McKenzie Johnston led the Lady Griz in points (24), rebounds (9), assists (6) and steals (3).

* Because Montana and Oral Roberts both went 2-0 in the predetermined format, no tournament champion was declared.

* Johnston, who averaged 16.5 points on 45.8 percent shooting in the two games, was named to the Lady Griz Classic all-tournament team. She also averaged 6.0 rebounds and 6.0 assists.

* Montana entered the Lady Griz Classic shooting 19.1 percent from 3-point range. Against Fullerton and Long Beach, Montana went 11 for 33 (.333). Eight of those 11 threes came on Saturday against the 49ers, with half of those coming from the hand of Johnston, who went 4 for 8.

* Nicholson’s 16 points against Fullerton on Friday were a season high this season for a Montana player … until Johnston put up 24 the next night against Long Beach to come within two of her career high.

* It took Nicholson seven games to lead Montana at least once in scoring, rebounding, assists, blocks and steals. Johnston (blocks) and Mekayla Isaak(scoring) are both sitting one category short of matching Nicholson in 5-for-5 coverage.

* In Montana’s 68-47 victory over Cal State Fullerton on Friday, Taylor Goligoski had the team’s best plus/minus of +19. The Lady Griz outscored the Titans 43-24 in the 21:54 that Goligoski was on the floor.

* McKenzie Johnston, who had 24 points, nine rebounds, six assists and three steals, while going 4 for 8 from 3-point range against Long Beach State, had the team’s best efficiency rating of the season of 25.

* With nine letter winners back in 2017-18, the Ladyjacks are off to a 6-1 start and will enter Thursday’s game on a six-game winning streak after dropping their season opener at Kansas State.

* Fifth-year senior Stevi Parker, who began her career at Tulsa for one season before transferring to Stephen F. Austin, is averaging 12.6 points and 11.1 rebounds. Freshman guard Alyssa Mayfield is adding 10.3 points on 50 percent shooting.

* The Ladyjacks’ first five wins of the season came against Howard Payne and Central Baptist College, and three Division I programs — Coppin State, Alabama State and Alcorn State — that are collectively 6-18. In other words, they were not greatly tested.

* Then came Saturday: Stephen F. Austin 77, South Dakota 55. That’s the same South Dakota team that was picked to finish third in a strong Summit League. The Ladyjacks hit six 3-pointers in the opening quarter and led 32-14 at the first break.

* Stephen F. Austin will extend its trip to Montana with a game at Montana State on Saturday.

* Stephen F. Austin is located in Nacogdoches, a city in east Texas, 40 miles from the Louisiana border.

Series history: Montana and Stephen F. Austin have met two times previously, with the Ladyjacks claiming both. Stephen F. Austin won 78-68 in Amarillo, Texas, in the 1987 WNIT and 54-46 last season on its home floor in Nacogdoches.

In last year’s game, Montana fell behind 30-15 at the half and still trailed 44-28 going into the fourth quarter. The Lady Griz would twice pull within four in the final period before falling by eight.

Stevi Parker had 11 points and 12 rebounds for the Ladyjacks. Emma Stockholm scored 12 points off the bench to lead the Lady Griz.

A visitor walked into Montana’s practice on Tuesday morning inside Dahlberg Arena and was greeted by the Lady Griz defending themselves with a full-court press, similar to the one they expect to face on Thursday night, when Stephen F. Austin comes calling.

Short, safe passes worked well against the pressure as the ball was brought up the court. Baseball passes were high risk, high reward. An easy shot resulted just as often as the ball was turned over.

After one turnover, coach Shannon Schweyen said, “If that pass doesn’t work against us, it for sure isn’t going to work on Thursday.”

And so preparations begin for both teams, who are meeting for the second straight year.

In last year’s game at Nacogdoches, Montana packed in defensively and played a zone, aware of the shooters the Ladyjacks had but otherwise willing to give up shots from distance.

Stephen F. Austin obliged, taking more than half (27 of 52) of its shots from 3-point range, hitting just seven and shooting 30.8 percent from the field overall.

Montana trailed 16-5 after the first quarter and 30-15 at the half, but its defense allowed it to make it very interesting in the fourth quarter, twice cutting SFA’s lead to four.

“We zoned them last year and did a good job,” said Schweyen, “which was ironic because we hadn’t hardly played it to that point.

“We kept track of their shooters but otherwise we packed it in. Our zone was really effective.”

Then Gabi Harrington hit a 3-pointer, Emma Stockholm knocked down a pair of free throws, and Sierra Anderson drilled a triple. A short shot by McKenzie Johnston made it 44-38, two free throws by Taylor Goligoski cut the lead to four, 44-40.

Stephen F. Austin wouldn’t make a field goal in the fourth, going 0 for 12, but the Ladyjacks hit 10 of 12 free throws to hold on to their lead. In the end, it was the clock that did in Montana. Plus that ineffective start.

“We got good shots in the game. We just couldn’t hit anything,” said Schweyen. “Gabi came in and sparked us, then we hit a bunch in a row. It would have been nice to get that going a little bit earlier.

Montana turned the ball over six times in the first quarter, 16 times for the game. Stephen F. Austin turned those turnovers into 15 points.

“We’ve got to handle their press and take care of the ball as best we can. We’ve got to take advantage when we break the press that we go down and get a good shot, and hopefully we’ll knock some of them down,” said Schweyen. “We’ve got our hands full. It will be a good test for us.”

When Stephen F. Austin is on offense, it might be tempting to focus on Parker, but she is scoring only 15 percent of the team’s 80 points per game. The Ladyjacks have 10 players who average more than five points per game. Montana has half that with five.

“This is one of the more complete teams we’ll play,” said Schweyen. “We’ve played some teams that are athletic but maybe not all good shooters. These guys are good shooters across the board.”

* Northern Colorado’s Savannah Scott was named the Big Sky Player of the Week on Tuesday. She averaged 23.5 points on 68.4 percent shooting in home wins over BYU and Pacific that snapped the Bears’ two-game losing streak. She also averaged 5.0 assists, 3.5 rebounds and 2.0 steals.

* Northern Colorado has gone 113 for 133 from the free throw line this season. That percentage of 85.0 ranks first in the Big Sky and first nationally as well. The Bears went 33 for 37 from the line in their upset win at DePaul to open the season, 23 for 25 in their overtime home win last week over BYU.

The Wildcats suffered their second loss of the season on Saturday, losing 114-87 at Oregon. The Fighting Hawks have won four in a row. Their most recent win was an 80-72 victory in Grand Forks over Northern Iowa on Saturday behind 29 points and 15 rebounds from Lexi Klabo.

* Idaho State, which has played just two home games this season, got swept on the road last week at Washington State and Wyoming. The Bengals got outscored by 12 in the fourth quarter in their 72-55 loss to the Cougars, then fell behind 24-11 after the first against the Cowgirls and never caught up.

* After playing two games at the Lady Griz Classic last weekend, Cal State Fullerton continued its road trip to Idaho and lost 80-60. The Vandals’ Taylor Pierce went 9 for 10 from 3-point range, accounting for all 27 of her points.