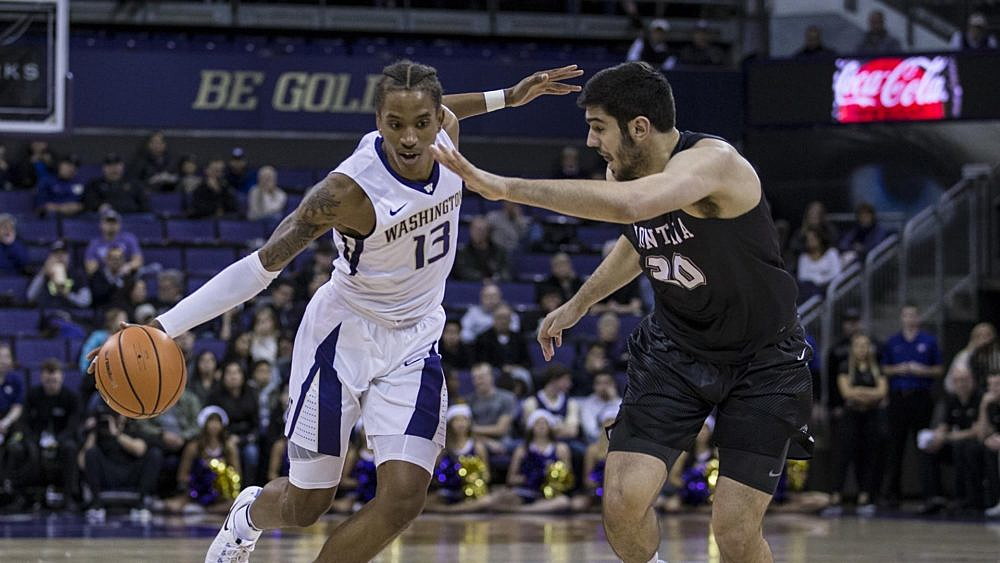 SEATTLE, Wash. – Montana had opportunities to earn its second signature win of the season but came up just short on Friday evening, falling to the Washington Huskies, 66-63.

Montana held a Husky offense that was averaging 82 points per game to a season-low 66 and out-rebounded Washington 41-27, including 20-6 on the offensive glass. Tacoma natives Ahmaad Rorie (19 points) and Bobby Moorehead (14) paced the Griz, in addition to 17 points and seven rebounds from Jamar Akoh. Rorie also had seven rebounds while Moorehead was 4-of-8 shooting from three-point range.

“Definitely a roller coaster ride for us,” head coach Travis DeCuire said. “We’re showing growth as a team, but we definitely would have liked to have finished that one off.”

Trailing by one at the half, Montana opened the second frame with four quick points to regain the lead. Washington (10-3), though, would score the next nine and would lead for the majority of the half. Despite playing from behind, Montana always stayed within striking distance.

The Grizzlies were within single digits the entire second half and used a 7-0 run – including five points from Akoh – to take the lead, 62-61, with 4:16 to play.

Montana held Washington to just a single made field goal down the stretch, but the Grizzlies were unable to connect, shooting 0-for-5 from the floor. Down one, the Grizzlies had five possessions over the final couple of minutes but were unable to take the lead, although they did have what would have been a go-ahead bucket waived off after junior Michael Oguine was called for an offensive foul.

Following a missed shot with 17 seconds remaining, Montana was forced to foul. UW’s David Crisp made 1-of-2, giving the Griz the ball with 11.2 seconds to play and trailing by two. Looking to tie the game, Oguine was fouled, sending him to the line for two shots.

“He was banged up – knee to knee – and if he would have stayed down he would have had to come out,” DeCuire said. “I prefer to have him shoot banged up than for them to pick a shooter for me.”

He made the first free throw, but his second that would have tied the game with under 6 seconds to play was no good. Fabijan Krslovic got the loose ball, but his tip did not fall and Montana was forced to foul once again.

“It’s hard to get quick shots against that zone,” DeCuire said. “We had a couple empty possessions at the end that we needed to get something out of. We fought.”

Montana had a nightmare start to the game, missing 10 consecutive shots and turning the ball over four times during a 10-0 Washington run. They quickly responded, using a 21-6 run to take the lead on back-to-back Akoh layups.

Montana only shot six free-throw attempts in the game – all over the final eight minutes – compared to 21 for Washington. Montana had a season-high-tying 20 turnovers, but also forced Washington into 18 giveaways. The Huskies rank among the nation’s leaders for steals and blocked shots, and showed why on Friday, recording 12 steals and blocking 11 shots.

Oguine was held to a season-low five points – the first time this year he hasn’t scored in double figures – and was limited to 24 minutes after two early fouls.

Despite the loss, the Grizzlies closed the non-conference portion of their season at 7-5, their most wins and first winning record since 2011-12. Even more impressive, Montana led or was within a single possession late in the second half in all of its defeats, showing signs of a team that has the ability to do big things come conference play.

“I see signs of what we’re capable of, the potential of our group,” DeCuire said. “We’ve figured out a rotation that will be good for us, and I’m excited about what’s in front of us.”

The team will have the next several off to enjoy the Christmas holiday before reconvening in Arizona on Dec. 26. Montana will open conference play with games at Northern Arizona on Dec. 28 and Southern Utah on Dec. 30.