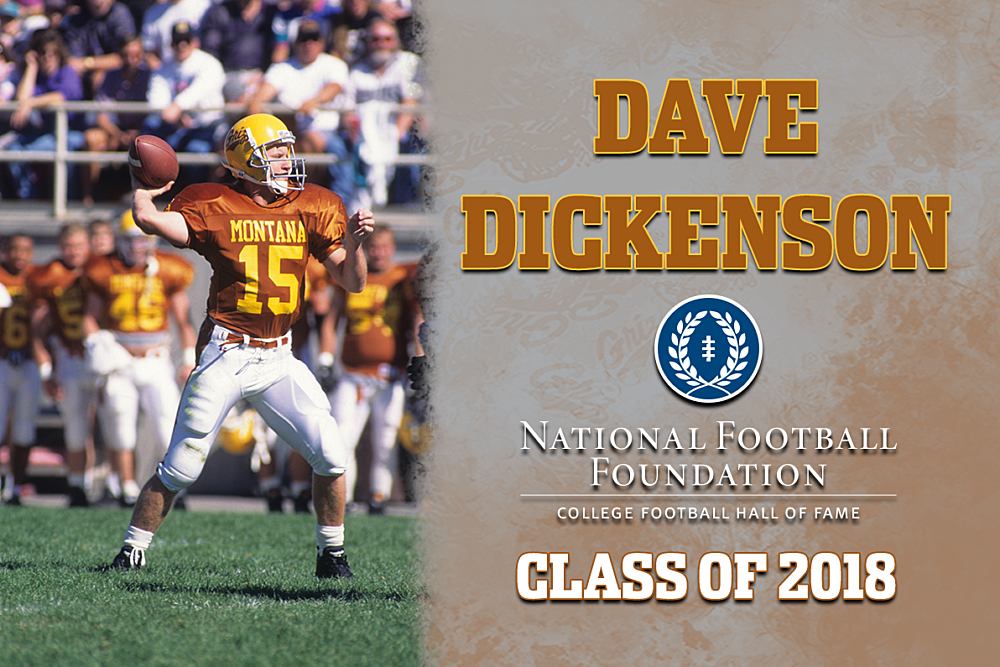 Montana football great Dave Dickenson has earned many accolades in his illustrious collegiate and professional career, but perhaps none as prestigious as this.

On Monday, the National Football Foundation announced that Dickenson will be immortalized as one of the greatest college football players of all time as a member of the College Football Hall of Fame Class of 2018.

Dickenson will be inducted into the Hall of Fame alongside nine other legendary players and three coaches at the NFF Annual Awards Dinner on Dec. 4 in New York City. Their accomplishments will also be enshrined at the College Football Hall of Fame in Atlanta.

“I am very honored and excited to be included in the Hall of Fame,” said Dickenson.

Dickenson is only the second player ever from the state of Montana to be inducted into the College Football Hall of Fame. The other: Grizzly great William “Wild Bill” Kelly who was inducted in 1969.

“Being inducted into the College Football Hall of Fame is such an amazing and well-deserved achievement for Dave,” said Montana Director of Athletics Kent Haslam.

“He is a great representative of the University of Montana and the Grizzly football program. He was the definition of a student-athlete during his years here at UM, and we could not be more proud of him and his accomplishments.”

The announcement of the 2018 Class was made today live on ESPN’s SportsCenter in Atlanta, the site of the College Football Playoff (CFP) National Championship.

“Each of these men has established himself among the absolute best to have ever played or coached the game, and we look forward to immortalizing their incredible accomplishments.”

The 2018 College Football Hall of Fame Class will be officially inducted at the 61st NFF Annual Awards Dinner on Dec. 4, 2018, at the New York Hilton Midtown. The inductees will also be recognized at their respective collegiate institutions with NFF Hall of Fame On-Campus Salutes, presented by Fidelity Investments, during the fall.

The recipient of the 1995 Walter Payton Award as the top player in the FCS, Dickenson led Montana to the FCS national title that year. In the championship game, he orchestrated a 12-play, 72-yard scoring drive that culminated with the game-winning field goal as part of a come-from-behind win over Marshall. In four playoff games in 1995, Dickenson threw for 1,500 yards and 13 touchdowns, bringing his totals at the end of the season to 5,676 and 51, respectively. Although the NCAA did not recognize playoff statistics at the time, he completed the regular season with a school- and then-Big Sky Conference single-season record 4,176 passing yards. Dickenson’s 379.6 yards per game in 1995 rank fifth all-time in FCS history and still stand as a school and conference record. His record-setting senior season also extended off the field where he was named an NFF National Scholar-Athlete and earned his third consecutive Academic All-America honors.

The three-time First Team All-Big Sky selection and Big Sky Offensive MVP led the Grizzlies to conference titles in 1993 and 1995, and he led the FCS in passing yards per game as a junior and senior. Dickenson finished third for the Walter Payton Award in 1994 and was an Honorable Mention All-American in 1993 after leading the team to the playoffs in both seasons. A three-time team MVP, his school-record 11,080 career passing yards are sixth in conference history, and his 33 career wins remain a program best. A member of the University of Montana’s Grizzly Sports Hall of Fame, Dickenson’s No. 15 jersey is one of only two retired jerseys at the school.

1. First and foremost, a player must have received First Team All-America recognition by a selector organization that is recognized by the NCAA and utilized to comprise their consensus All-America teams.

2. A player becomes eligible for consideration by the Foundation’s honors courts 10 full seasons after his final year of intercollegiate football played.

3. While each nominee’s football achievements in college are of prime consideration, his post football record as a citizen is also weighed. He must have proven himself worthy as a citizen, carrying the ideals of football forward into his relations with his community and fellow man. Consideration may also be given for academic honors and whether or not the candidate earned a college degree.

4. Players must have played their last year of intercollegiate football within the last 50 years*. For example, to be eligible for the 2018 ballot, the player must have played his last year in 1968 or thereafter. In addition, players who are playing professionally and coaches who are coaching on the professional level are not eligible until after they retire.

5. A coach becomes eligible three full seasons after retirement or immediately following retirement provided he is at least 70 years of age. Active coaches become eligible at 75 years of age. He must have been a head coach for a minimum of 10 years and coached at least 100 games with a .600 winning percentage.

* Players that do not comply with the 50-year rule may still be eligible for consideration by the Football Bowl Subdivision and Divisional Honors Review Committees, which examine unique cases.