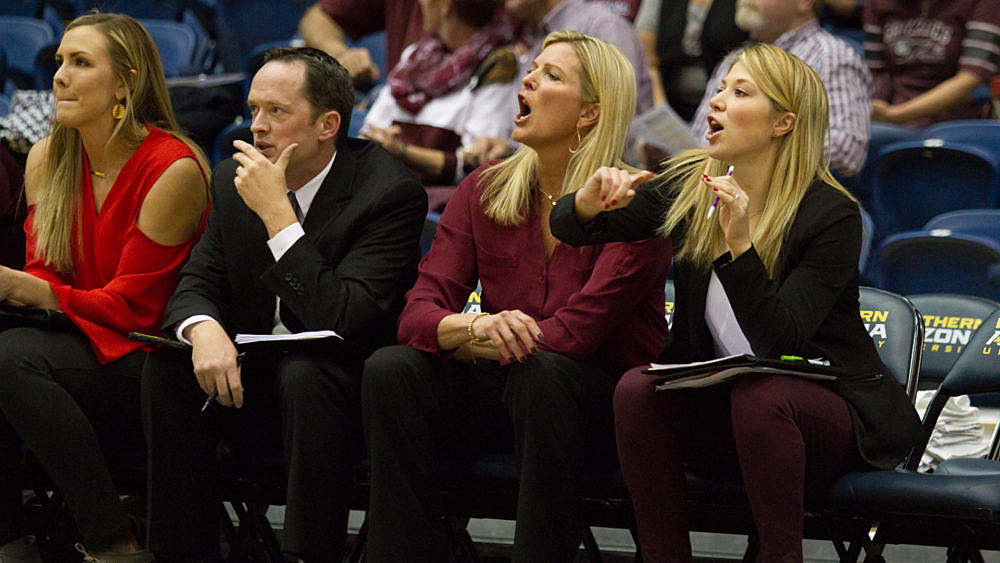 Anyone still wondering when the Lady Griz of new were finally going to start reminding them of the Lady Griz of old — you know, with balanced scoring, lockdown defense and an ability to win on the road — let them know the time has arrived.

Montana checked all three on Saturday evening, winning 69-52 at Northern Arizona at the Walkup Skydome in Flagstaff to finish off its first Big Sky Conference road sweep in nearly two years.

This might feel like old times as well: The Lady Griz will go into February sitting atop the Big Sky standings, reaching the midpoint of the league schedule with a record of 7-2.

“Every one of these we can squeak out is big for us,” said UM coach Shannon Schweyen, who is showing what she and her staff can do with a more experienced team on the floor than they had a year ago.

“We talk about being in control of where we’re at. We just want to make sure we continue to keep getting better and enjoy these after we win them, then get ready to go to work and start getting ready for the next one.”

And if Montana, which improved to 11-9 overall, keeps getting better than it played on Saturday, that might spell trouble for the rest of the Big Sky.

Seven players scored seven or more points — none more than Taylor Goligoski‘s 13 — and Montana held Northern Arizona without a field goal in the third quarter and to 27.5 percent shooting for the game.

“Everybody got to contribute tonight, which was good. I felt like it was a great team effort,” said Schweyen.

Montana didn’t trail the final 37 minutes of the game, but the lead was only three, 30-27, at the break.

Everything changed in the third quarter, starting with a Goligoski 3-pointer just eight seconds in. Not to be outdone, Madi Schoening hit triples on Montana’s next two possessions to stretch the lead to 12, 39-27, with less than 75 seconds gone by.

By the time Northern Arizona finally scored, on a free throw at the 4:42 mark, the Lady Griz had rolled off a 17-0 run to take control.

“The girls came out on fire,” said Schweyen, who noted that assistant coach Mike Petrino had spotted something he thought Montana could take advantage of. “Mike came up with a little action he thought would be good. Three threes isn’t a bad way to start the second half.

“It’s always nice to come out after halftime and make some shots and hopefully put some doubt in their minds. That allowed us to separate a little bit. Taylor was feeling it a little bit, and Madi came out firing. Then we had some good action in the post.”

Montana took what would be its largest lead of the game, 53-32, into the fourth quarter. It was the same lead — 21 points — that Northern Arizona had in Missoula last month before the Lady Griz rallied to win in overtime.

“You can never count anybody out. We keep reminding ourselves all the time about what we did the last time we played. A 15-point lead is nothing,” said Schweyen.

Northern Arizona would open the fourth on a 12-2 run to cut its deficit to 55-44, and Kaleigh Paplow brought the Lumberjacks within 10, 59-49, with 3:10 left when she converted a three-point play.

But Caitlin Lonergan answered, and after coming up with a block on the defensive end, Jace Henderson scored inside to make it 63-49 with less than two minutes left. And that sealed it.

“The girls kept answering. (Northern Arizona was) making some shots, but we kept coming down and finding some answers,” said Schweyen.

Two of Montana’s late baskets came off feeds from McKenzie Johnston, who finished the road trip, which opened with a 74-65 win at Southern Utah on Thursday, with 16 assists and only three turnovers.

Both of her late assists upped Montana’s lead from 11 to 13, which kept the Lumberjacks (4-16, 1-8 BSC) from being able to cut the advantage to single figures.

“Those were big ones. She penetrated and found the right person,” said Schweyen. “And we knocked them down. She had a fantastic weekend.

“She does a lot of things that don’t show up (in the statistics), like hustle plays and smart plays. I’m just really pleased with the point-guard play we’re getting from her.”

Four players finished in double figures, with Goligoski leading the way with 13. Henderson added 11, Schoening and Lonergan 10 each.

Goligoski went 4 for 6 from the arc on the road trip and shot 58.8 percent overall. Schoening went 2 for 3 from 3-point range on Saturday, helping Montana to an encouraging 6-for-13 performance.

Sophia Stiles, making her first career start and giving Montana a noticeable increase in its pace, energy and athleticism from the opening tip, scored her team’s first seven points of the game and finished with eight and a team-high eight rebounds.

Hailey Nicholson also added eight points, her best scoring effort in nearly a month. They came on 4-of-7 shooting, with all of her shots seeming to come in open space.

“I’m so happy for Hailey. I’ve been wanting her to get in there and get a feel. Once she starts rolling on those little jumpers, that’s her game,” said Schweyen. “She stepped away, filled and replaced nicely. It was great to see her knock some of those down. She needed that.”

With a road sweep to its credit, Montana will play five of its next seven at home, where the Lady Griz have won five straight and are 8-3 this season.

February opens with a home game on Thursday against Northern Colorado (14-6, 6-3 BSC). The Big Sky preseason favorite is tied for third, one game back in the loss column, and handed Montana one of its two league losses, a 68-50 decision in Greeley on Jan. 6.