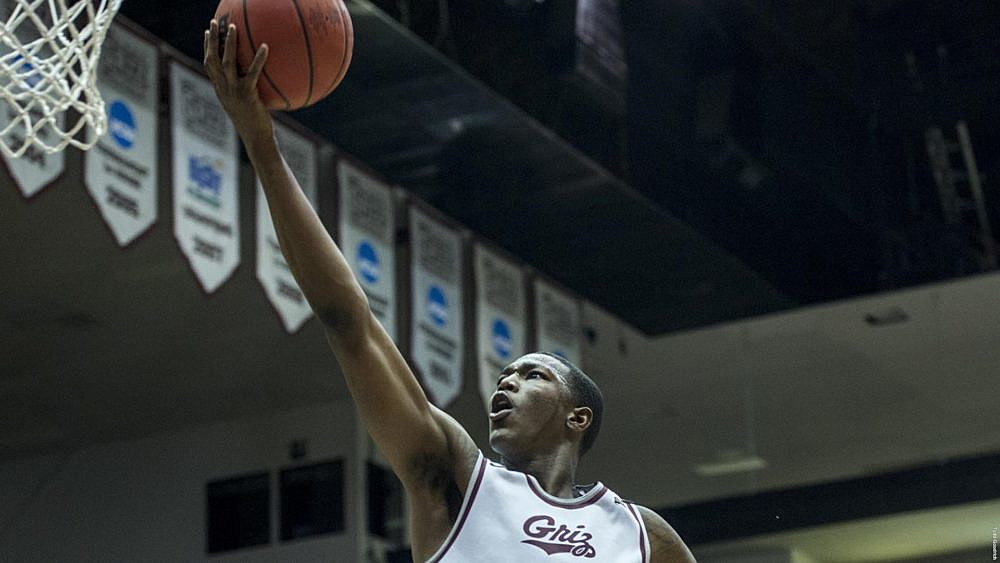 “I like the way we’re playing together with some intensity and some urgency,” head coach Travis DeCuire said. “We’re resilient.”

In its first two Big Sky games, Montana’s defense was the story, holding Northern Arizona and Southern Utah to season lows for field-goal percentage, including just 49 points vs. the Thunderbirds. During the third game of league play, the offense rose to the occasion.

The offensive performance was historic on many levels:

The Grizzlies have now posted 30-point victories in back-to-back games and are out-scoring their Big Sky opponents 275-197, winning by an average of 26.0 points per game.

“We’re still competing with desperation,” DeCuire said. “We have to keep doing the right things every possession, regardless of the score.”

Early on, it was the defense once again, holding North Dakota scoreless for the first 7 minutes, 16 seconds, as the Grizzlies raced out to a 14-0 lead. North Dakota missed its first 10 shot attempts, also turning the ball over three times before getting on the board.

Montana never trailed and led by as many as 40 points – a season high – when Karl Nicholas converted an and-one opportunity with 4:40 to play. Nicholas finished the game with a career-high 17 points, shooting 8-of-8 from the floor.

Falls’ first assist came on a no-look, behind-the-back pass in transition. The second was a half-court alley oop.

“Timmy’s taking care of his roommate,” DeCuire said. “He’s got great court vision and I think Karl’s starting to figure out that if he runs, it’s coming.

“Karl has been active. His energy defensively is what gets him on the floor and keeps him on the floor, and then he puts himself in the right places offensively as he grows. I just think those guys have brought positive energy the last two weeks, and you’re starting to see that as a group.”

Four players were in double figures, but the 109 points were a team effort. Sophomore Sayeed Pridgett had eight points, five rebounds, four assists and two steals. Fabijan Krslovic scored seven points, shooting 5-of-6 from the free-throw line. Sophomore Trever Spoja hit a late three pointer, while freshman Admir Besovic had a three-point play that pushed the Griz to 100 points.

Fellow freshman Lars Espe scored his first career points, knocking down a three-pointer, in addition to a pair of assists. As a team, Montana had a team-high 21 assists and shot a season-best 61.5 percent (40-of-65), including 57.1 percent on a season-most eight three-pointers.

“Our bench has been phenomenal, and that’s been the biggest difference from November,” DeCuire said.

Despite holding a 21-point lead at the half, Montana never stepped off the gas, extending the lead with a 13-0 run early in the second half.

Sitting tied with Montana State as the only two unbeaten teams in the league, Montana will face its toughest test so far, taking on a strong Northern Colorado team on Saturday evening. The Bears have the most total wins in the Big Sky (11), including a non-conference victory at Wyoming and a conference win over preseason favorite Idaho last week.

“Stay hungry,” DeCuire said of his message to his team. “It’s so early in conference, we can’t start looking at the standings. The guys are enjoying the process and they’re playing together. They’re showing signs of a team that wants to win.”

Tipoff is slated for 7 p.m. MT. The first 500 fans in attendance will receive free admission. Tickets can be purchased online or at the Adams Center box office.