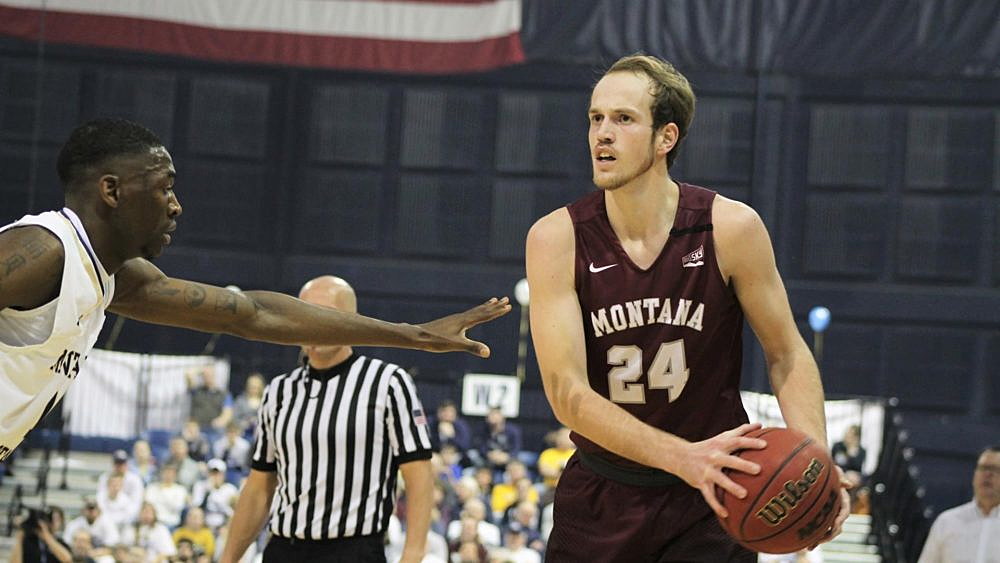 All week, Travis DeCuire preached revenge to his team. Montana held a 13-game winning streak over Montana State before the Bobcats snapped that streak a year ago in Bozeman. It left a salty taste in the team’s mouth, one they didn’t want to experience again.

The Grizzlies got their payback on Saturday night, holding the Bobcats to 19 second-half points in a 67-52 victory. The win improves Montana’s record to 7-0 in Big Sky play for the third time in school history.

“It was a phenomenal team effort,” head coach Travis DeCuire said. “You have to have a little bit of grit in your heart to defend the way we did tonight.”

Junior Bobby Moorehead recorded his first career double-double with 10 points and a career-high 12 rebounds, but his biggest impact may have been on defense. Matching up against preseason player of the year Tyler Hall, who had 37 points in last year’s meeting in Bozeman, Moorehead limited Hall to 10 points on 3-of-9 shooting, including 1-of-6 from three-point range.

Hall and Harald Frey account for 43 percent of their team’s points on the season, but the tandem scored just three free total throws in the second half, shooting 0-for-6 from the floor.

Overall, the Griz defense allowed just 19 points in the second half, limiting the home team to 16.7-percent shooting on four field goals (on 24 attempts, including 0-for-7 shooting from beyond the arc).

Montana has prided itself on defense throughout the year, but DeCuire felt that, despite getting wins, there had been some slippage over the past several games. He spent extra time in practice this week on defense, going back to the principles.

“To hold that team to 19 points in the second half, and no made field goals for Frey or Hall, is an incredible performance,” said the fourth-year head coach, who is now 6-1 vs. the Bobcats in addition to a 7-1 mark as a player.

Montana struggled to begin the game, allowing a 9-0 run and facing its largest deficit – 18-10 – of the conference season. The Grizzlies slowly chipped away throughout the remainder of the opening frame and a Timmy Falls three at the buzzer tied the game at 33-33 as the two teams entered the locker room.

“Timing is everything in this game,” DeCuire said. “To go in tied as opposed to down changes your whole thought process. The momentum in the locker room, guys were fired up and they knew they could play better.”

DeCuire didn’t focus much on the X’s and O’s during the intermission because there weren’t many adjustments to make. Their game plan, overall, was working, the team just wasn’t finishing.

“At the end of the day, we’ve got to play tough if we’re going to win, and I can’t draw that up on the board,” he told his team.

Falls was again the focal point to begin the second half, nailing a step-back trey to get Montana on the board and give the Griz their first lead since 10-9.

“I thought they responded,” DeCuire said. “We were struggling to get buckets, we had no pace. Timmy made that shot for us and it kind of propelled us.”

The Griz would not trail after the Falls triple, using a 7-0 run to turn a one-point lead into an eight-point advantage, 48-40. Moments later, a Moorehead three pushed the lead to double digits.

Falls finished the game with eight points and four assists. Jamar Akoh was Montana’s leading scorer with 15 points and nine rebounds, including 10 in the first half. Ahmaad Rorie had 13 points (nine in the second half), while Michael Oguine added eight with six rebounds. Sophomore Sayeed Pridgett had a team-high three steals.

Montana State’s 19 second-half points on 16.7-percent shooting were season lows, while its 52 points were the second lowest of the season, more than 25 points below its season average. The Grizzlies turned the ball over just eight times, including twice in the second half. On offense, they took advantage of their size down low and out-scored the Bobcats 40-16 in the paint.

Montana is now 7-0 to begin conference play, marking the third time in school history the Griz have done so. They have won five in a row on the road, with Saturday being the toughest environment yet, in front of a sold-out crowd.

“They’re playing together, and we’re excited,” DeCuire said. “It hasn’t been an easy seven. Coach (Blaine) Taylor would give us the plus-minus – two points on the road for a victory, one point at home for a victory. Right now, we’re sitting pretty good, which is nice.”

Seven of Montana’s final 11 games are at home, including games this week against Southern Utah (Thursday) and Northern Arizona (Saturday).