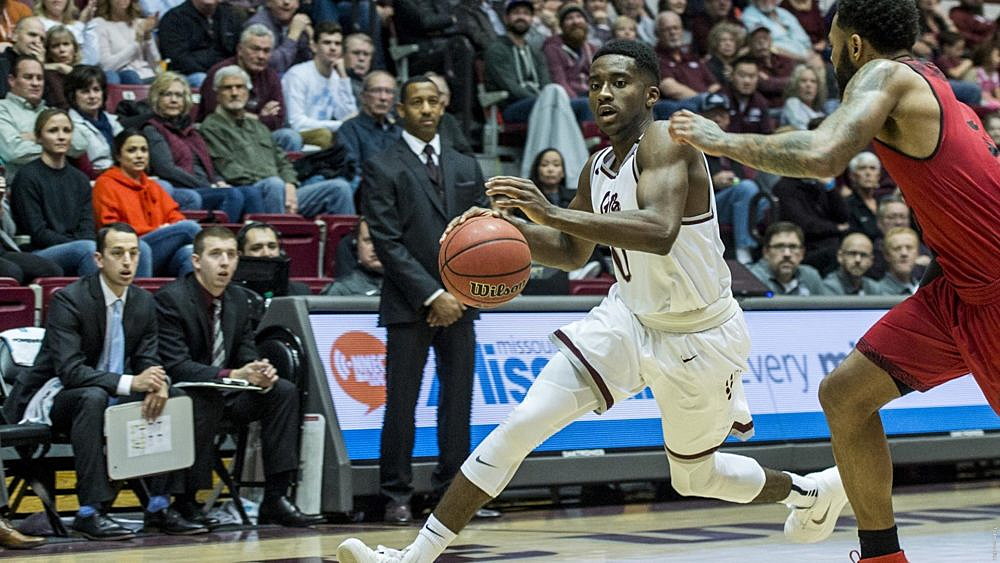 Montana put together another dominant defensive effort on Thursday evening, defeating Southern Utah, 71-47, to improve to 8-0 in Big Sky play. It marks the second-best start to league play in school history, and the longest overall win streak under head coach Travis DeCuire.

Montana held Southern Utah to just 47 points on 30.6-percent shooting. Most impressive, the Thunderbirds average nearly 24 three-point attempts and nine makes per game, but were limited to 1-of-11 shooting from long range on Thursday.

“Our ability to cover ground quickly has helped force teams up the floor,” DeCuire said of his defense. “We take some things away where we know penetration is going to be.”

Southern Utah’s top two scorers combined for six points on 2-of-9 shooting, while its top three-point shooter was 1-of-8.

Junior Bobby Moorehead was once again a key force on defense.

He would have had the chance to record his second consecutive double-double if he hadn’t been pulled with 5 minutes to play and the Griz holding a 24-point advantage. He finished with eight points and a game-high nine boards.

“Once again, he was incredible defensively,” DeCuire said. “He fought the touch, was able to contain the drive, he did a good job sliding his feet.”

Michael Oguine was the star early on offense. He paced the Griz with 22 points, including 14 of Montana’s 30 points in the first half. The junior was 3-of-4 from three-point range, also adding three steals.

Like most of the Grizzlies, junior Ahmaad Rorie started slow on offense. Through 31 minutes, the team’s leading scorer on the season had just two points on 1-of-9 shooting. Over the next 4:11, however, Rorie would score 17 consecutive Griz points, expanding a 12-point lead to 28.

“Once one went in he got hot,” DeCuire said. “He got to the rim and got the layup, and from there, he kind of exploded.”

As the top scoring team in the conference, Montana made just three of its first 14 shots to begin the game and trailed 12-8 early. The Griz would quickly respond, though, going on a 9-0 run to take a 20-14 lead. They held a 30-21 advantage at the intermission and led for the final 27 minutes of the contest.

Sophomore Sayeed Pridgett also played a role defensively, collecting seven rebounds, three steals and a blocked shot. As a team, Montana forced the Thunderbirds into 17 turnovers – turning them into 28 points.

“Early on, we got the ball where we wanted and took the shots we wanted and that we normally make, and we didn’t make any of them. One of the things I say is, ‘Don’t let your offense affect your defense.’ We kept guarding and held them to 32 percent in the first half, which is how we held the lead.”

The Grizzlies, still a full two games up on second place, will next host Northern Arizona on Saturday night. The Lumberjacks are coming off of a road win at Montana State on Thursday. All Montana staff/faculty and their families can get in free to the game by showing their Griz Card. Additionally, all children 12 and under get in free, with a poster signing on the court after the game.

“We’re just trying to stay hungry,” DeCuire said. “Any hint of complacency we deal with it right away, but I haven’t seen much of it. They’re playing for the bigger picture.”