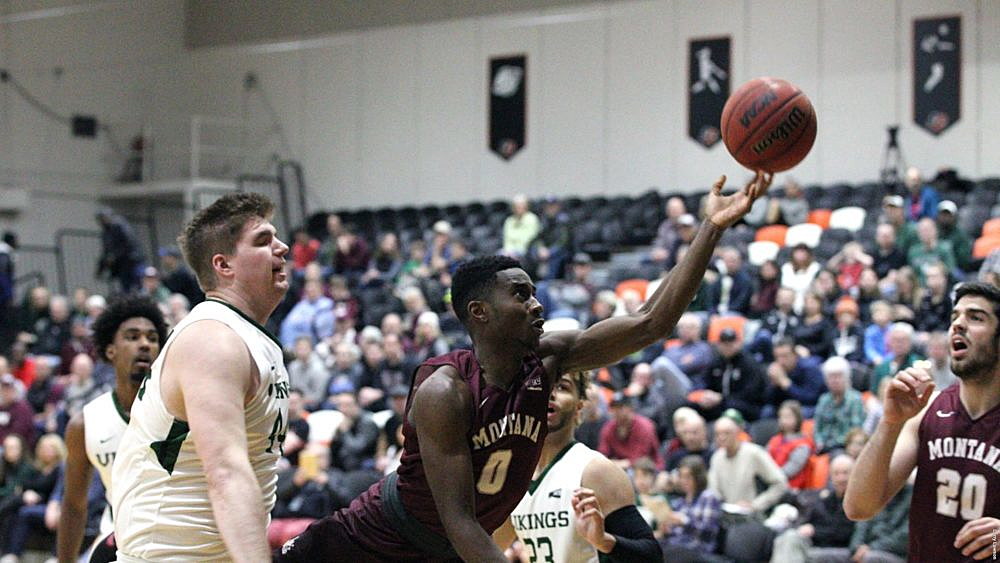 Montana produced its gutsiest win of the season on Saturday afternoon, overcoming a first-half deficit to beat Portland State, 92-89. The Grizzlies remain undefeated in Big Sky play and handed the Vikings their first home loss of the year.

Montana trailed by six, 48-42, at the halftime intermission, but began the second half on an 11-4 run to regain the lead. Junior guard Michael Oguinehad six of those 11 points, and finished the game with a career-high 39 on 12-of-17 shooting.

“It feels great,” head coach Travis DeCuire said. “In November and December, we weren’t winning these games. We learn from losses, and now that it counts and matters, these guys are believing in each other and finding ways to make it happen.”

Prior to last week, it had been 59 game since a Grizzly reached 30 points in a game, but two players have now accomplished the feat in the past three games, with Jamar Akoh scoring 34 points vs. Northern Colorado. Oguine’s 39 points are the most by a Montana player since Anthony Johnson scored 42 in the 2010 Big Sky championship game vs. Weber State.

“He’s a gamer,” DeCuire said. “We knew he could get to the rim, and when he gets his jumper going he’s very hard to turn off. He was crashing the glass, he was fighting for loose balls, he was making plays. We saw his eyes light up, so we let him go.”

Oguine scored a tip-in with 14:42 remaining to give Montana a 57-56 lead. The Grizzlies would not trail for the remainder of the contest, but it wouldn’t be without some intense moments.

Montana pushed its lead to as many as 13, using a 13-2 run over a stretch of 3:05. Oguine had seven of those points, including a huge three-pointer in the corner that forced a Portland State timeout. The run coincided with a hustle play at midcourt with Bobby Moorehead diving for a loose ball and getting a timeout and possession. A total of four offsetting technical fouls were issued after a lengthy review, but Montana was able to use that as a motivating factor, scoring seven of the game’s next nine points.

“I think that’s when we won the game,” DeCuire said. “We were scrapping for that ball. We had two or three guys that had a hand on it, and they had two or three guys who had a hand on it. It was whoever laid out that was going to get the ball. It was an emotional lift for us. The bench went nuts. From there, the guys believed we were going to win this game by all means necessary.”

Leading by double digits with 5:34 to play, it looked as if Montana might cruise to victory, but coming out of the timeout, the Vikings responded with a 10-1 run to get within four points. They would cut the deficit to a single possession on multiple occasions, but each time, Montana kept its separation.

The Grizzlies led by just a single point, 84-83, with 1:12 to play, but made their next six free throws down the stretch.

For the second time in as many games, Montana overcame a first-half deficit. The first 20 minutes saw seven ties and 15 lead changes, but Montana was in front for the majority of the period. That was, however, until the final 3 minutes when Portland State scored 15 points in a span of 1:57 to go up by six, 48-42.

The Vikings made six of their final nine shot attempts to close the half, after beginning the game 10-of-34. At that same moment, Montana had as many makes as Portland State (10) but did so in half as many shots (17).

The Grizzlies came out strong to open the second half, and at one point were out-scoring the Vikings 37-18 in the second stanza. A big part of that was limiting turnovers.

It was no secret that Portland State would try to press the Grizzlies and force them into mistakes. The Vikings entered the contest leading the country for steals and turnover margin, and that was evident early, with the Grizzlies turning the ball over 12 times in the first half. In the second period, though, Montana committed just seven turnovers, and forced the Vikings into nine.

“We settled in,” DeCuire said of the difference between the first and second half. “They need turnovers to score. For us, it was our poise, the way we took care of the ball, and we got the shots we wanted when it mattered.”

In addition to Oguine’s record-setting day, senior Fabijan Krslovic scored a season-most 15 points, his first time in double figures this season. He also had eight rebound and three assists, while Jamar Akoh barely missed a double-double with 11 points and a team-high nine boards. Junior Ahmaad Rorie was once again in double figures with 16 points, while Sayeed Pridgett had six points and four rebounds.

Adding to his 39 points, Oguine also had eight rebounds, two assists, two steals and a blocked shot. Montana made 55.1 percent of its shot attempts, and took a season-most 47 free throws.

The Grizzlies have now played four conference road games, coming away with a pair of sweeps. They will play one more road game next week – at Montana State on Saturday – before closing the season with seven of their final 11 games at home. Montana is alone in first place at 6-0 while Montana State will enter the week in second place (currently 4-1 entering Saturday night’s game at Sacramento State).

“I’m happy with my team, I love my team, I love the way they’re competing for us. They’re representing the Griz the right way,” DeCuire said. “But we’re not even close to being satisfied or complacent. We’ll find ways to stay motivated.”