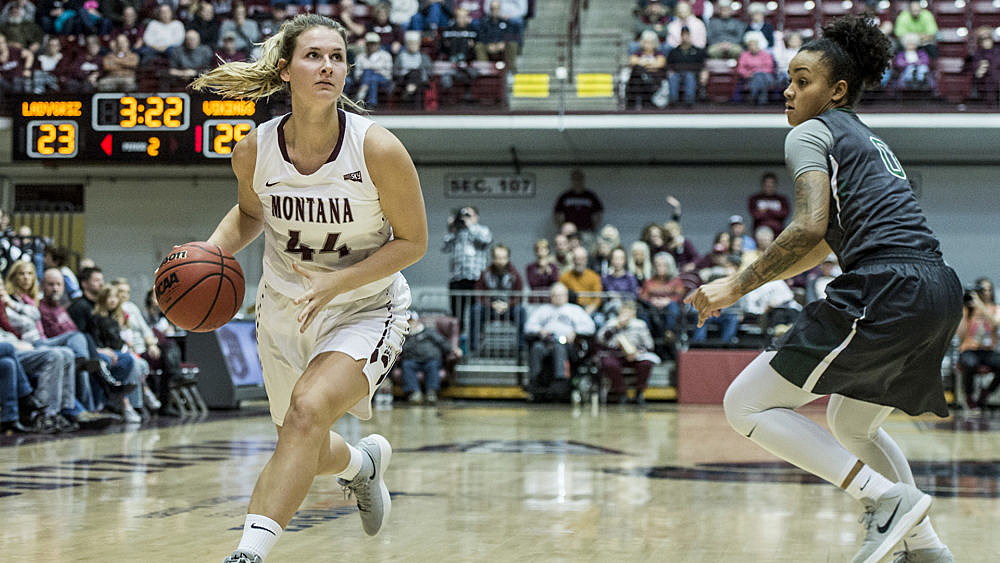 Facing a team they had no answer for last season, second-year coach Shannon Schweyen‘s Montana Lady Griz used a big second half to pull away from Portland State on Saturday afternoon at Dahlberg Arena in Missoula, winning 69-53 to improve to 5-1 in league.

The Lady Griz, who remain in a first-place tie atop the Big Sky with Northern Colorado, shot 55.2 percent in the second half, 44.3 percent for the game against a team that held them to a pair of shooting percentages in the 20s last season and scoring totals in the 40s.

“I can’t say enough about our kids and the way they’ve evolved and the way they believe and the heart they play with,” said Schweyen. “They really wanted this one. The girls absolutely laid it out there today.”

No player embodies the difference from one season to the next more than Jace Henderson, who scored eight points on 25 percent shooting in two games last year against the Vikings.

Going up against Portland State’s 6-foot-4 Courtney West, Henderson shot-faked and drop-stepped her way to a career-high 16 points on 8-of-11 shooting. She also matched a career high with 13 rebounds and added four assists.

“Jace is a different player this year. She’s become a stud. She was getting isolated a little bit and had some nice moves, which she finished over a 6-4 post,” said Schweyen.

It wasn’t just the offensive end that showed the strides Montana has made. Had it not been for two turnovers in the game’s final minute, the Lady Griz would have held the Big Sky’s top-scoring team, which was averaging 76 points entering the game, in the 40s.

“We went out and slapped some Lady Griz D on them today,” said Schweyen. “I was really proud of the way we played on D. That was a big focus, because they are so explosive offensively. I was hoping we could hold them in the 40s, but I’m not going to get too greedy about that.”

The Vikings’ leading scorer, Ashley Bolston, who averages more than 20 points per game, was shut out until an inconsequential basket midway through the fourth quarter. She finished with three points on 1-of-6 shooting.

“She had a rough night. I don’t think she had a lot of good looks,” said Schweyen. “The girls did a good job.”

The final margin would have seemed like an impossibility to anyone who watched a tight, tense first half, when neither team led by more than six points.

A pair of free throws by Portland State’s Sidney Rielly, who scored 14 points in the first half, six of which came at the line, gave the Vikings a 31-29 lead at the break.

“She is really tough to guard,” said Schweyen. “She’s quick and explosive and good off the dribble, and she shoots the ball well. She’s the total package.”

With a strong crowd of 2,886 barely back into their seats for the start of the third quarter, Madi Schoening, Thursday’s standout in Montana’s win over Sacramento State, got things rolling early, hitting a 3-pointer just 12 seconds in.

West answered with a basket for the Vikings on the next possession, but that would be their final lead of the game.

Henderson scored inside to put Montana up for good, Taylor Goligoski drained a three, and Henderson and McKenzie Johnston combined for the next six points to give the Lady Griz a 10-point lead, 43-33.

Montana’s bench, which has different options Schweyen can go to depending on the nature of the game and opponent, has been a strength all season and it was again against Portland State.

Emma Stockholm, who didn’t play on Thursday because of the matchup, found her perfect foil in the Vikings, who play a zone defense, which highlighted Stockholm’s inside-out abilities.

She scored in the paint to make it 45-35, then stepped out and hit a 3-pointer in the third quarter’s closing seconds to send Montana into the fourth holding a 48-35 lead.

Stockholm would score 14 points in 18 minutes, coming within one of her career high.

“She was a big lift,” said Schweyen. “I knew she was going to get some time today against the zone, and she always has confidence shooting the ball.

“She was a big factor today. It’s harder to play that zone if you have a big kid who can step out and shoot it.”

The final quarter didn’t require a hero, but it did need someone to apply the final hurt against a team that went full-court with its defense. Enter: Goligoski.

After the Vikings cut the lead to 11 with 4:30 to go, Montana went over Portland State’s press to Goligoski, who was in should-she-or-shouldn’t-she land. Should she take the quick 12 footer early in the shot clock or should she pull it out and run clock?

Always the shooter: swish. Not long after: swish.

“We went over the top of their press, and Taylor made good decisions,” said Schweyen. “She pulled up and hit those jumpers, and they were huge baskets.

“You’re on a fine line of having the chance to score but wanting to use some clock. She made really good decisions.”

Bolston was a non-factor the entire game, and Montana finally slowed down Rielly in the second half as well. She went without a field goal and scored just a pair of free throws to finish the game with 16 points.

Averaging more than 40 points between them, the duo was held to 19 on 5-of-15 shooting. They combined for five points in the second half.

“We wanted to focus on her and Bolston, and hold those guys down,” said Schweyen. “Madi did a great job on Rielly. You can never relax when you’re guarding her.”

Johnston, who is shooting 53.8 percent in eight games since going 0 for 6 in Montana’s mid-December loss at Fresno State, led both teams with 17 points. She added six rebounds, four assists, two steals and a blocked shot while playing all but the final few seconds.

“It was a heck of a game by her,” said Schweyen. “She’s so smart. She does all the little things that go unnoticed that are intelligent plays. And she always gives you everything she has.”

Montana will go into next week, when the Lady Griz play Montana State, tied atop the Big Sky with Northern Colorado, which pulled out a 63-57 win at Idaho State on Saturday.

Weber State, an 80-69 winner at home over North Dakota, is tied with the leaders in the loss column at 4-1. In Saturday afternoon’s other game, Montana State won 85-50 at home over Sacramento State behind 23 points from Delany Junkermier and 13-of-24 shooting from the arc.

The Lady Griz and Bobcats will play next Saturday at 2 p.m. in Bozeman.