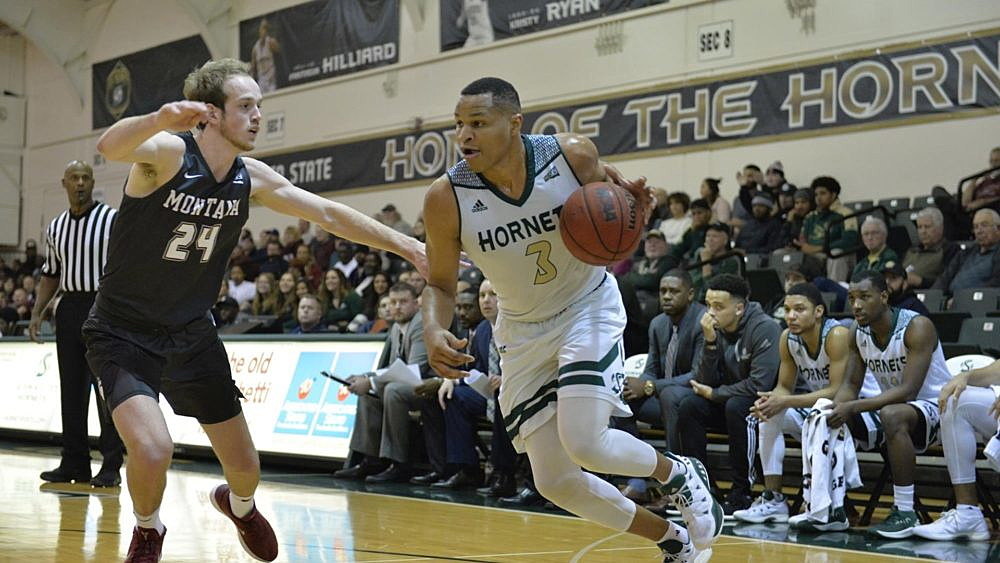 For the first time in four tries, Travis DeCuire and his Montana basketball team defeated Sacramento State on the road, knocking off the Hornets, 78-66, on Thursday night. The win was impressive, but especially so given the circumstances.

The Grizzlies, who were 0-5 on the season when trailing at halftime, allowed an 8-0 run late in the first half to find themselves down six. They cut that in half with a Bobby Moorehead three-pointer at the buzzer, and then immediately eliminated the deficit by scoring the first six points of the second half.

“We weren’t playing Griz basketball,” DeCuire said. “We wanted it to be easy and they had a good scout. They took some stuff away and made some things difficult, so we had to make some adjustments.”

An Ahmaad Rorie three-pointer with 17:07 to play broke a 38-38 tie and ignited the Grizzlies on a 15-5 run that saw their lead reach double figures for the first time. Montana never trailed again, and would grow to as many as 22 points, 73-51, with just over 5 minutes to play.

“It was fun watching us out-scrap a scrappy team,” DeCuire said. “In the second half we had to get dirty. Sometimes you have to win an ugly game by playing ugly basketball.”

Despite trailing at the break, Montana was in control for much of the first half, trailing for just 2:45. After shooting zero free throws in the opening frame, Montana would shoot 22 in the second. Even more impressive, the Grizzlies made 19 of them, shooting 86.3 percent – second-best on the season.

“We needed to be more aggressive. It was definitely put your head down and get to the paint,” DeCuire said of his halftime message.

“I trust our defense a lot more,” DeCuire noted about the difference between this team from past teams. “I think we can get four or five stops if we need to. On offense, we have the personnel where if Jamar (Akoh) is having a tough night someone else will step up.”

Rorie scored 19 of his team-high 23 points in the second half, including a stretch midway through in which he scored seven consecutive Grizzly points. He was a perfect 5-for-5 from the free-throw line, improving to 19-for-19 in Big Sky play.

Michael Oguine (16 points) and Moorehead (13) were also in double figures, with Moorehead knocking down three of Montana’s seven three-point attempts. Fabijan Krslovic had a near-double-double with eight points and eight rebounds, in addition to strong defense against the Hornets’ leading scorer.

“He did a phenomenal job in the first half on (Justin) Strings,” DeCuire said of his senior. “We couldn’t score for a while, and he was the one making post moves and attacking, and got us going.”

The Grizzlies shot 54 percent from beyond the arc and 46 percent overall, and won despite the Hornets shooting 53 percent from the floor. Montana did so by taking 17 extra shots, out-rebounding the home team 36-22 (15-6 on the offensive glass) and forcing 17 turnovers on 14 steals.

After Sac State shot 6-of-10 from three-point range in the first half, the Hornets were limited to 1-of-4 shooting in the second half.

Montana is now 5-0 in Big Sky play, marking just the fourth time in school history that the Grizzlies have done so. DeCuire has been part of three of those milestones, twice as a coach and once as a player. Montana sits alone atop the Big Sky standings, with Idaho State losing at North Dakota and Montana State falling at Portland State. The Griz and Vikings will meet up Saturday afternoon.

“Keep your eyes on the prize,” DeCuire said. “We’ve got Sunday and Monday off, so the guys know, ‘Give us what you’ve got and earn that extra day off.”