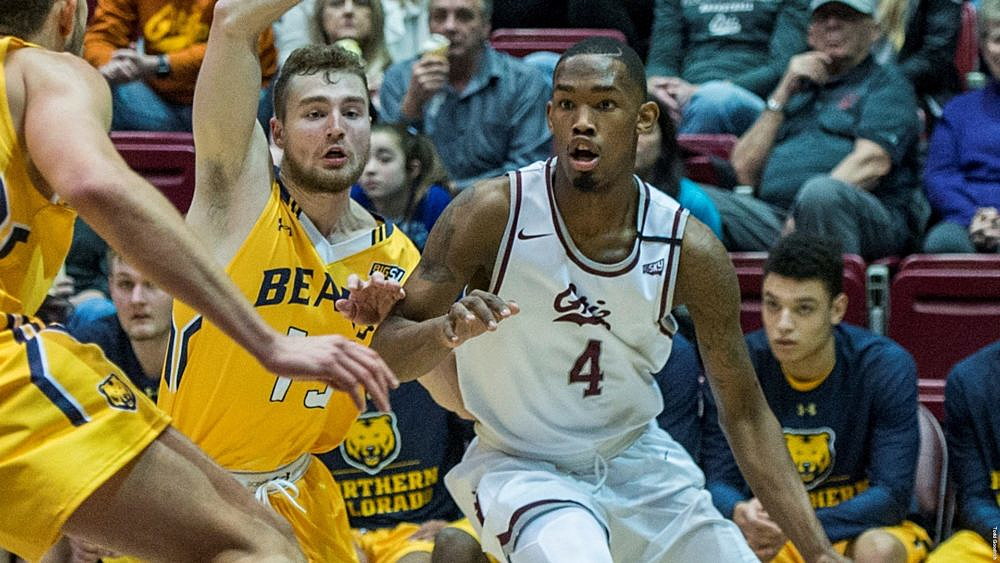 Perhaps the most impressive part about Montana’s 7-0 mark to begin conference play isn’t the seven wins compared to zero losses, but instead how it’s been done and where it’s been accomplished.

The ‘how’ has been an array. The Grizzlies lead the conference in scoring, averaging 85.9 points per league game, including 109 in a win over North Dakota. They also lead the league in defense, allowing just 69.1 points per game, including 52 points and four second-half field goals in last weekend’s win at rival Montana State. Montana has won by wide margins – most notable back-to-back 30-point wins over Southern Utah and the Fighting Hawks – and narrow margins – a three-point win at Portland State. After beginning the season 0-5 when trailing at halftime, Montana has now won three consecutive games in which it has not led at the break.

“We’ve won in a variety of ways, which is nice,” head coach Travis DeCuire said. “At the start, it wasn’t that way, and sometimes that can lead to complacency or slippage.”

The second part is the ‘where’. Five of Montana’s seven conference games thus far have come on the road. The Grizzlies earned a road sweep at Northern Arizona and Southern Utah, followed by a difficult road stretch at Sacramento State and Portland State. This past weekend, Montana got revenge against the Cats.

So now, as the first half of the league slate winds down, Montana will play seven of its final 11 regular-season games inside Dahlberg Arena – a venue that has produced a sterling 7-0 mark this year.

“It hasn’t been an easy seven,” DeCuire said. “Coach (Blaine) Taylor would give us the plus-minus – two points on the road for a victory, one point at home for a victory. Right now, we’re sitting pretty good, which is nice.”

The Grizzlies are in a good spot, holding at least a two-game lead over every Big Sky team just seven games in. But the message throughout the last several weeks has been simple: Don’t get complacent.

Montana knows that it began 2015-16 with a 6-0 mark, only to finish in second place. In 2016-17, the Grizzlies began conference play 5-1 before slipping down the stretch and finishing in fifth place. That can’t happen this year, and a big way they plan to prevent it is by beating the teams they should beat.

When Montana and Southern Utah last met, on Dec. 30 in Cedar City, Utah, the Grizzlies rolled to a 30-point win. They held the Thunderbirds without a field goal for nearly 13 minutes in the first half and limited the home team to just 26.3-percent shooting overall and a season-low 49 points.

So how do you get a group of players to not overlook a team they beat on the road by 30 points just three weeks prior?

“We can’t overlook anybody,” DeCuire said. “That’s when you get in trouble and let one slip. The team that often times wins the league isn’t always the team that beats the teams at the top, but the one that takes care of the teams they should take care of.”

Not to mention, Southern Utah is not only better from last year, but also from last month. The Thunderbirds have won two of their last three contests, defeating Northern Arizona and Eastern Washington, and their last loss was a four-point defeat to preseason favorite Idaho.

Southern Utah has five players averaging at least 9.7 points per game, led by Dwayne Morgan’s 15.1 points and 7.9 rebounds. Brandon Better, the Thunderbirds’ top three-point shooter, didn’t play last time vs. the Griz, but is expected to on Thursday.

“Southern Utah scores at a high rate. They have a lot of games in the 90s,” DeCuire said. “They have a low-post presence with three guys, so we’ll need to have one of our better defensive games.”

The Thunderbirds have the fourth-best scoring offense in the league (78.1 points per game), including the third-best three-point percentage and free-throw percentage. They also have committed the fewest turnovers in the Big Sky (27th in NCAA). Southern Utah’s defense, on the other hand, is allowing 83.9 points per game on 49.4-percent shooting,

Tipoff on Thursday is scheduled for 7 p.m. MT. Fans can purchase tickets online or at the Adams Center box office.

SERIES VS. THE THUNDERBIRDS
Montana owns plenty of success against Southern Utah, against a current 11-game winning streak in the series.

Travis DeCuire is 5-0 against Southern Utah, including a 30-point win in late December. In that game, Montana used a 33-6 first-half run and at one point held the Thunderbirds without a field goal for nearly 13 minutes. Six Grizzlies scored at least eight points, led by 20 from Ahmaad Rorie. On defense, Montana limited Southern Utah to 26.3-percent shooting.

Other notable performances vs. the Thunderbirds:

STARTING STRONG
Montana is off to a 7-0 start to begin Big Sky Conference play, marking the third time in the Grizzlies’ 55-year history in the league. Travis DeCuire has been a part of two of those, once as a player and now as a coach.

20 GAMES IN
Montana will hit the 20-game mark on Thursday, and a win over the Thunderbirds would improve its record on the season to 15-5. It would mark the 14th time in program history, which dates back to 1901-02, that the Grizzlies have won at least 15 of their first 20 contests. The last time it happened was in 2012-13.

PLAYING IN FRONT
Montana trailed by as many as nine points last weekend at Montana State, and for a total of 17:00. Both figures are season highs during conference play. However, through seven Big Sky games, the Grizzlies have trailed for just 36 minutes, 6 seconds out of 280 total minutes. More impressive, they have trailed for just 6:43 in the second half.

LEADING THE BIG SKY
Through six games, Montana holds a two-game lead in the Big Sky standings. The Grizzlies, though, also are atop the conference for many offensive and defensive statistical categories. The Grizzlies rank first for:

WINNING STREAK
Montana is not only 7-0 to begin Big Sky play, but its six-game winning streak is its largest of the season. The Grizzlies have won seven in a row and nine of their last 10, and have not lost a game in more than a month (Dec. 22 at Washington). The seven-game winning streak is tied for the longest of Travis DeCuire‘s career (also December 2015-January 2016), and a win on Thursday would push the streak to the longest since the 2012-13 Grizzlies set a school record with 14 wins in a row.

After winning back-to-back games to open the season (Nov. 10 and 13), Montana alternated wins and losses over its next nine games before winning back-to-back contests vs. UC Riverside and UC Irvine (Dec. 17 and 19). The Grizzlies narrowly lost at Washington (Dec. 22) before rattling off seven wins in a row.

The Grizzlies earned 153 points in this week’s poll, good for a No. 21 national ranking. The poll, now in its 19th season, is voted on by 31 head coaches.

HOME SWEET HOME
The Grizzlies hold a perfect 7-0 mark at home this season. Over the past two decades, Montana has begun a season with seven or more consecutive home wins three times, including twice in the past three seasons under Travis DeCuire.

During those six games, the Griz are averaging 88.8 points per game and a 17.0 margin of victory.

SIMPLE ROUTINE
Montana is one of 20 NCAA Division I schools to use the same starting lineup in every game this season, using guards Michael Oguine and Ahmaad Rorie, and forwards Jamar Akoh, Fabijan Krslovic and Bobby Moorehead.

LOOKING AHEAD
Montana will host Northern Arizona on Saturday before going on the road for its final plane trip of the regular season.