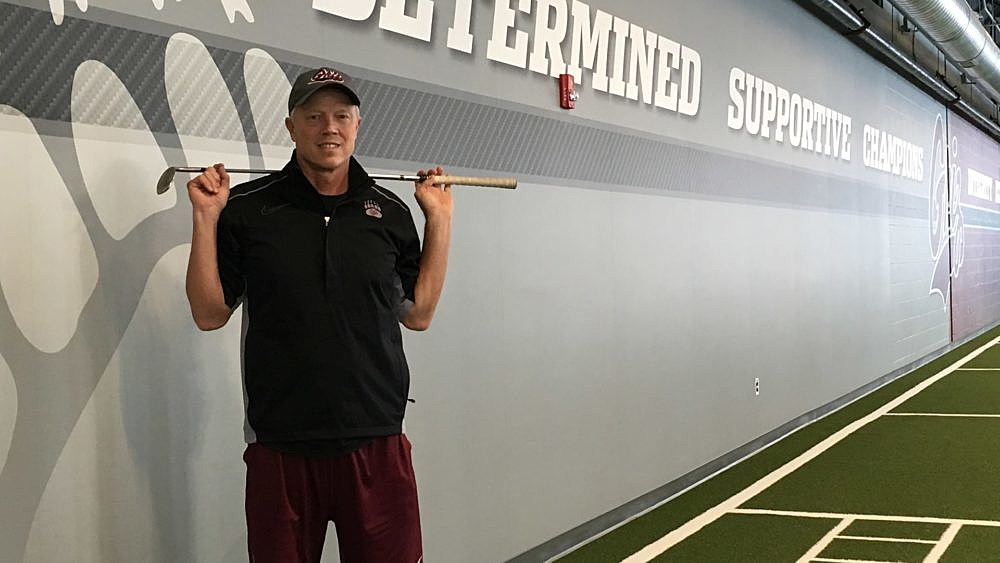 Literally, the move was just a few feet, from the tennis office next door to golf, two spaces that look largely alike. Figuratively, it has put a new spring in the step of a longtime Montana head coach.

Kris Nord, who served as the department’s interim women’s golf coach for the team’s fall season, has accepted an offer to make it a permanent arrangement. He replaces Matt Higgins, who stepped down in August.

“Golf is a passion of mine, so this is a great opportunity for me to continue in another sport I love and not have to move very far,” said Nord, who was the program’s very first coach for three years when it was added in the early 90s.

Initially hired in 1982 to be the head women’s and assistant men’s tennis coach, he took over both programs in 1986 and led them for two decades, until 2006, when Montana hired its first full-time women’s coach.

In the decade since, the men’s program has become one of the most consistent in the Big Sky Conference, with Nord being voted by his peers as league coach of the year in both 2012 and ’14.

In 2012 he led the Grizzlies to a perfect 8-0 league record and their first-ever conference title. In 2014 Montana won the Big Sky tournament championship and advanced to its first NCAA tournament.

But all that court time, all those practice reps, all that travel, decades and decades worth, started taking a toll on the coach’s health and well-being.

“Basically I had 41 years of college tennis, from my playing career to my coaching. I have body parts that are wearing out,” said Nord, who was asked in August if he’d be willing to fill Montana’s golf coaching vacancy until a permanent hire could be made prior to the start of the spring semester.

“I accepted strictly to get us through a rough spot and get the program to January. There was no thought of continuing to do it beyond that.”

Jason Brown, longtime volunteer assistant to Nord, was named the interim men’s tennis coach for the fall. He’ll continue in that position through the spring semester.

What was assumed would be the short Nord era with the women’s golf program got off to a good start in early September, just two weeks after he was named interim coach.

Montana shot three rounds of 300 or better at the Battle at Old Works in Anaconda, and Baylee Barckley won the individual title with a score of 2-under.

It was the first of four fall tournaments for the Grizzlies, who twice were top five, four times top 10.

“I was a little apprehensive about the travel and new routines, but once I got a little more comfortable, I found it was a real fun group to coach and that I was enjoying it more than I had the last couple years of tennis,” he said.

“Tennis practices and travel are more physical than golf. Midway through the fall, I realized I was ready for a change. It’s spiced things up and forced me to work on some different things. I’m excited about it.”

Senior Hailey Hoagland shot a 69 in her second round in the fall under Nord, who employed a watchful eye but kept a mostly hands-off approach to his tournament coaching, partly because that’s his style and partly because of his newness to the program and its players.

Hoagland would finish the fall with a team-best stroke average of 76.4.

“He kind of stepped back and watched,” said Hoagland. “He watched us play and saw how we reacted to different situation. When we needed help, he was right there for us, willing to do whatever he could to help, but he didn’t try to implement all these different ideas and plans.

“What he did worked for us. We played really well in the fall considering the circumstances.”

Had the initial plan — of Nord coaching for the fall, then returning to tennis once a new golf coach was hired — played out, Hoagland would have been competing for her fourth coach in the spring.

“I wasn’t super thrilled about having another new coach, just because the spring is our championship season. It would have been a difficult transition,” she said.

“When he told us he was taking the job, we were all pretty excited. People may look at him as a tennis coach, but he is very knowledgeable about golf as well.”

As a tennis coach, Nord admits he was getting worn out and eyeing a future retirement date. That’s no longer the case. He’s found new life in an old sport, one that was a part of the Nord family from the days of his youth.

“Golf has taken some of the pressure off that. I still have the energy and motivation to do my very best,” he said.

“I really feel like I can help these kids get their heads right and get them prepared. We’re doing this to win a Big Sky championship. That’s where my head is and theirs should be too. We have a chance to do that here, so that’s my expectation.”

The team’s spring season begins in mid-February at the Battle at the Rock in Riverside, Calif. The Big Sky Championship will be contested April 20-22 at Boulder City, Nev.