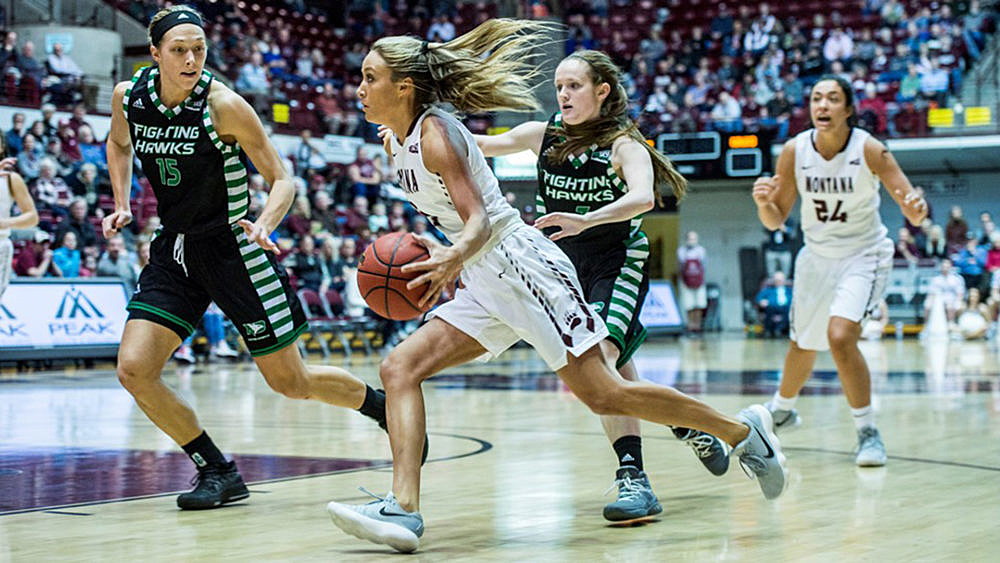 A freshman season that was showing so much promise and helping return the Montana women’s basketball team to Big Sky Conference contender has come to an abrupt end.

It was confirmed on Tuesday that the knee injury suffered by Sophia Stiles in the third quarter of Saturday’s home win over North Dakota was a season-ending ACL tear.

“It’s devastating to this team right now in so many ways,” said coach Shannon Schweyen. “We will miss her presence on the floor, but we’re also heartbroken for her because she is a basketball lover.

“She loves the game and loves to play, and it’s always sad to see that taken away from somebody. People recognized that and had an interest in her because she is such a beautiful athlete to watch.”

It’s another blow to a program that has become accustomed to dealing with injuries since Schweyen was hired in August 2016.

“Sophia is such a special kid, not only in what she does on the floor for us but the kind of person she is off the floor,” said Schweyen. “From the moment she stepped foot on campus, she’s been extremely competitive in everything she’s done

“It was so much fun to watch her progress as the season went on and see how much more comfortable she became on the floor with her teammates.”

Stiles, who played at Malta High School but passed on the summer travel-ball circuit, joined the program in the fall as a likely redshirt. But something special happened every time she stepped onto the court.

She upped Montana’s energy level and pace of play, and made the Lady Griz noticeably more athletic and able to use all 94 feet of the floor, whether that be defensively or in transition.

“Her defensive instincts are as good as any freshman I’ve ever been around. You only had to tell her something once and she picked it up and got it,” said Schweyen.

“And probably more than anything, she did so many things in categories that aren’t even on the stat sheet.”

She showed flashes of what she could do in the nonconference, when she averaged 5.7 points and 2.3 rebounds.

The 5-foot-9 guard had four blocks against Cal State Fullerton and five assists against Stephen F. Austin, a performance that shifted the tenor of that game from Montana being pressed to the Lady Griz going on the offensive. The Ladyjacks just couldn’t contain her.

Her most complete game of the season to that point came at Montana State, when she put up 11 points and nine rebounds.

She followed that with a masterpiece in Montana’s win at Southern Utah, finishing with a season-high 26 points on just 11 shots, with six rebounds and four assists. It put her within one of the program’s single-game scoring record for a freshman.

That led to Schweyen making a bold, un-Montana-like move: making a change to her team’s starting lineup in the second half of the season. But there was no denying it. The Lady Griz were a better version of themselves the more Stiles was on the floor.

Moving into a starting role completed the rise of Stiles from probable redshirt to contributor to starter on a team that was challenging for a Big Sky title.

“We’d seen her with Malta, but that was it,” said Schweyen. “We hadn’t seen her compete in other environments, so there was a lot about her we didn’t know.

“I don’t think any of us had any idea she’d be the player she is. She was a pleasant surprise for all of us.”

Stiles made her first start in Montana’s win at Northern Arizona. She scored her team’s first seven points against the Lumberjacks and had 16 points and six rebounds on Thursday against preseason league favorite Northern Colorado.

In Montana’s first 10 Big Sky games, those leading up to Saturday’s victory over North Dakota, Stiles was averaging 9.6 points and 5.1 rebounds while shooting better than 46 percent.

Despite starting only two of those 10 games, she ranked second on the team in assists, blocks and steals, third in rebounds and was the team’s top shooter from the 3-point line.

“Whether she played a lot of minutes or didn’t get a lot of minutes, she was the same every day and competed in everything she did,” said Schweyen. “I loved that about her. You never felt like she wasn’t giving it her all.”

Montana, tied for second in the Big Sky with two other teams and sitting just half a game out of first place with four weeks remaining, plays at Portland State and Sacramento State this week.

“Unfortunately we won’t be building from where we’ve been the last 4-5 games,” said Schweyen. “We’re not back to square one, but we’re certainly back to a different spot.

“We’ll be faced with a different lineup and a different situation with our depth. When things like this happen, it allows other players to show what they can do. There is an opportunity now for someone to step up and contribute to the team in a new way and make an impact.”