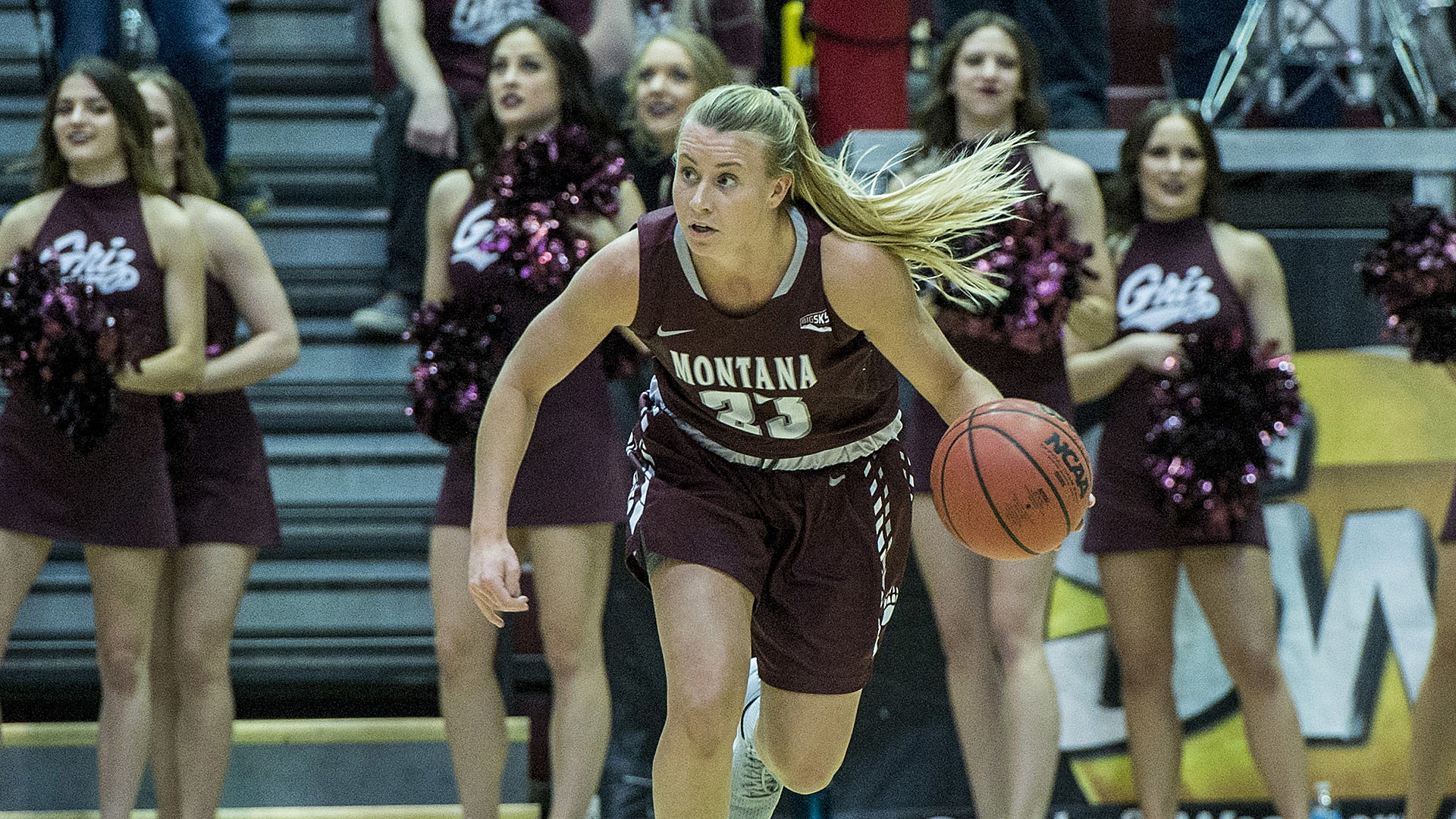 After taking a four-game pit stop to reset and regroup, the Lady Griz are back on the Road to Reno, engines firing.

Montana shot a season-best 54.5 percent and scored 53 second-half points to pull away from Montana State on Saturday afternoon at Dahlberg Arena, winning 87-63 to avenge an 81-64 loss at Bozeman last month.

The win snapped a four-game losing streak and will send the Lady Griz on the road next week with everything now on the line. They won’t return to Missoula until their season is over or they are Big Sky Conference champions.

Montana (13-14, 9-7 BSC) will play at Weber State and Idaho State next week, then head directly to Reno, where the league tournament opens a week from Monday.

“This was huge for a lot of reasons,” said Shannon Schweyen, who picked up her first win over the Bobcats (14-13, 8-8 BSC) as head coach. “You never want anyone to sweep you, and we were at home for our last one.

“You want to get a little momentum heading into the tournament. We’re in for a long stretch, but this is step one in making something happen. This was a great first step toward something great happening.”

Jace Henderson got to work in the first half, scoring 10 points on 5-of-7 shooting to stake Montana to a 34-30 halftime lead, and it was Taylor Goligoski stepping up in the second.

The sophomore guard went 4 for 6 from the arc in the second half and was the spark that helped the Lady Griz out-score the Bobcats 27-11 in the game-changing third quarter. Goligoski went 4 for 18 in Montana’s previous six games, but she let the ball fly with no-doubt releases on Saturday.

“It’s been a long time coming for Taylor. She picked a good game to come alive,” said Schweyen. “We’ve been waiting for a night like this.”

But nobody had the game that Madi Schoening had. Singled out in a recent film session reviewing Montana’s loss at Montana State — Schoening had two rebounds as the Lady Griz got worked on the boards — she responded with 18 points and a career-high 14 rebounds.

As is oftentimes the case with Schoening, she didn’t do it with flash. She just played harder than everybody else in her 38 minutes on the court.

“It was quite a performance on her part. She’s one of those kids who is so quick to the ball. If there is a loose ball, she’s going to go get it,” said Schweyen.

“There have been a lot of Lady Griz who play hard, but she’s got to be near the top as far as laying it all out there.”

When Montana lost at Montana State last month, the Lady Griz had no answer defensively for the Bobcats, who either got open looks from the arc or got to the basket.

It was antithetical — you don’t zone a team that ranks fifth in the nation in 3-pointers made — but Schweyen played a hunch and did it anyway. She knew Portland State had done so and defeated the Bobcats twice this season, allowing 56.5 points per game in their two meetings.

Montana State made 13 triples on Saturday but they came on 36 attempts, and few, if any, were the second-chance soul killers — miss, offensive rebound, find open shooter, good, and a small part of you dies inside — that did in the Lady Griz in Bozeman.

“This was a great game for the ladies. They just battled so hard and played some serious defense,” said Schweyen. “We hadn’t played a lot of zone, so I wasn’t sure if we’d be able to stay in it because they are just so hard to guard. I thought we did a great job adjusting as the game went along.

“Thirteen threes seems like a ton, but that’s about what they average. They take half their shots from three, so you have to get a little bit lucky and hope they’re missing some. Then rebounding is big in controlling things, not giving them second looks.”

Montana State grabbed a single offensive rebound in the first half and had only seven for the game. When Schoening was done collecting her 14 rebounds and Hailey Nicholson her nine, which matched her season high, Montana was +25 on the boards, finishing with a 48-23 advantage.

“We gave up 19 offensive boards at their place, which is enough to make you sick,” said Schweyen. “We needed to take pride in boarding it. It was exciting to see the intensity we played with. We just played with a ton of heart and emotion.”

Like they were in Bozeman, Montana and Montana State were tied after the first quarter on Saturday, thanks to the Bobcats’ four 3-pointers.

The Lady Griz went up 24-23 early in the second quarter on two free throws by Caitlin Lonergan. It didn’t feel like it would be the case at the time, not as back-and-forth as it was, but Montana would lead the rest of the game.

The Lady Griz shot 50 percent in the second quarter to build a modest four-point halftime cushion, then scored the first six points of the third quarter to up their lead to 40-30.

The lead was eight, 46-38, when Goligoski put her stamp on the game and put Montana on its way to victory.

She outscored everyone else on the court, including her own teammates, 11-0, knocking down three triples in a span of two minutes, and all of a sudden the lead was 19, 57-38.

Montana State would never get closer than 16, and the lead reached a game-high 28 points, matching Montana’s largest lead in a game this season, when Nicholson hit back-to-back jumpers midway through the fourth quarter.

She would finish with 10, her best outing of the calendar year, and would be one of five Lady Griz to reach double figures.

Montana went 20 for 25 from the line, this after shooting 57.9 percent in two home losses last week, and the bench shot 8 for 12. In other words, the Lady Griz had it going, all of them.

“We had great contributions from everybody. It was a real team effort,” said Schweyen. “(Montana State) won here last year, and those are things you don’t forget. Our girls wanted to make sure this one didn’t get away from us.

“I loved how we put 40 minutes together. It’s been a long time when we didn’t lose some intensity in a stretch. It was huge that we kept it going for 40 minutes.”

Montana may go into next week in seventh place in the Big Sky, but Saturday’s result keeps alive its hope of a top-four finish.

Four teams are directly ahead of the Lady Griz, one game up in the standings at 10-6. Two of those — Weber State and Idaho State — come next week on the road, the only meetings of the season between the teams, meaning important tiebreakers will be on the line.

Northern Colorado leads the way at 13-3 and can do no worse now than tie for the regular-season championship. Idaho, which lost twice at home this week, sits alone in second at 11-5, followed by Idaho State, Weber State, Portland State and Eastern Washington.

Montana plays at Weber State at 7 p.m. on Wednesday, at Idaho State on Friday at 7 p.m.