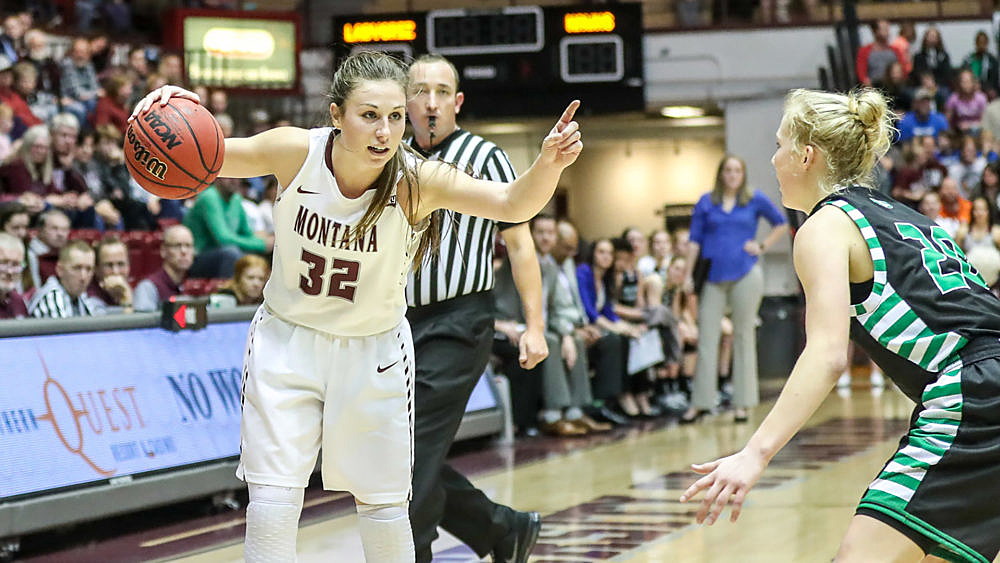 For those who missed Montana’s thrilling 53-51 victory over North Dakota on Saturday afternoon at Dahlberg Arena, a familiar cinematic visual of Taylor Goligoski‘s game-winning jumper that came with 2.2 seconds remaining: think Jimmy Chitwood downing South Bend Central at the end of Hoosiers.

After the Fighting Hawks had rallied from down 10 midway through the fourth quarter to tie it at 51-51 with 24 seconds left on a Fallyn Freije three-point play, the Lady Griz went all in on Goligoski to win it.

“That’s what we wanted. Their bigs had been cheating off our bigs all night long, and Taylor is a kid who can elevate over people,” said coach Shannon Schweyen. “She is one of our best on the team at creating her own shots.”

After McKenzie Johnston, who played all 40 minutes and finished with 12 points, eight assists and five boards, bled the clock to 10 seconds, she got the ball to Goligoski at the top of the key.

Goligoski took two dribbles to her right, Chitwood style, to get to the elbow, then rose up and drained one over a pair of defenders.

“We wanted to go into that with about eight seconds, then crash the boards hard in case she missed it,” said Schweyen. “Those are always fun, memorable shots to make. I’m happy for Taylor.”

The win helps somewhat balance out a visual from the third quarter, of Sophia Stiles, Montana’s dynamic freshman who moved into the starting lineup three games ago, lying on the ground holding her knee.

It’s become a familiar scene for the Lady Griz, who lost Kayleigh Valley to a knee injury in practice last season, then Alycia Sims in a game. In October it was Valley again.

“We’re going to hope for the best and that it’s not season-ending,” said Schweyen. “We’ve seen enough of those. It’s nothing you want to ever get used to, but unfortunately that’s sports.

Stiles scored 26 points last week at Southern Utah, one off the program record for a freshman, and added a team-high 16 on Thursday in Montana’s home loss to Northern Colorado.

Three minutes into the third quarter, Stiles attacked the basket, only to land awkwardly.

“That girl has had an unbelievable season so far. The sad thing is she is just starting to get comfortable,” said Schweyen, sounding like she’s already assuming the worst. “She was understanding our plays and how to attack. We were starting to see some of the things she’s capable of doing.

“She’s been an incredible competitor and so enjoyable to coach and be around every day. She’s a great, great kid. There are so many bright things in her future.”

Goligoski’s end-game dramatics came at the end of a contest that got bogged down by poor shooting for both teams (or great defense if you wish, but a lot of looks on both sides were open).

North Dakota shot 26.9 percent in the first half, Montana only slightly better at 29.0, which sent the Lady Griz into the break leading 21-19. It was Montana’s second-lowest-scoring first half of the season.

The Lady Griz hit nine of their 14 shots in the third quarter, and Goligoski’s basket just before period’s end sent Montana into the fourth leading 40-34.

Goligoski, who finished with 11 points on 5-of-9 shooting, opened the final quarter with a basket, and Madi Schoening added a pair of free throws to extend the lead to 44-34.

Montana’s advantage reached 10 again, 49-39, when Johnston muscled her way to an and-one with six minutes remaining.

But the Lady Griz would only add one more basket before Goligoski’s game-winner, going 1 for 7 with three turnovers, and that allowed North Dakota to fight its way back into it.

Jill Morton started the comeback with a 3-pointer, which Lexi Klabo followed with a three-point play. Klabo would hit three of four free throws to bring the Fighting Hawks within three, 51-48, with 1:03 left.

After a Montana turnover, Freije drove to the basket, scored and drew a foul with 24 seconds left. Her free throw brought North Dakota even for the first time since late in the second quarter.

Following Goligoski’s jumper, North Dakota opted to advance the ball and inbound it from in front of its own bench. But Jace Henderson read the play, a post entry pass to Klabo. She swatted it down and Montana ran out the final two seconds.

“After Taylor’s basket, we got a great stop at the other end,” said Schweyen. “The game’s never over now that you can advance the ball the way you can. Jace saw it and kind of like the Super Bowl batted that thing down. It was a good stop.”

Klabo, with 14 points and 12 rebounds, and Freije, with 19 points and 10 boards, both had double-doubles for North Dakota, which only got five points from its bench players.

Montana’s bench added just 11 for the second straight game, and that’s where Schweyen will have to look should Stiles be lost for an extended period or the season.

“We’ve been talking about our depth and how everybody has to be ready at all times, because they might be called upon to contribute,” said Schweyen.

No team has learned that more the last two seasons than the Lady Griz.

With the win, Montana (12-10, 8-3 BSC) remains in a second-place tie in the Big Sky standings with Northern Colorado and Idaho, which both won on Saturday, the Bears 78-63 at Montana State, the Vandals 101-66 at home over Sacramento State.

Weber State remains atop the league at 8-2 after winning 77-65 at home over Northern Arizona.

In other league games on Saturday, Idaho State won 66-39 at home over Southern Utah and Eastern Washington won 64-57 at home over Portland State.