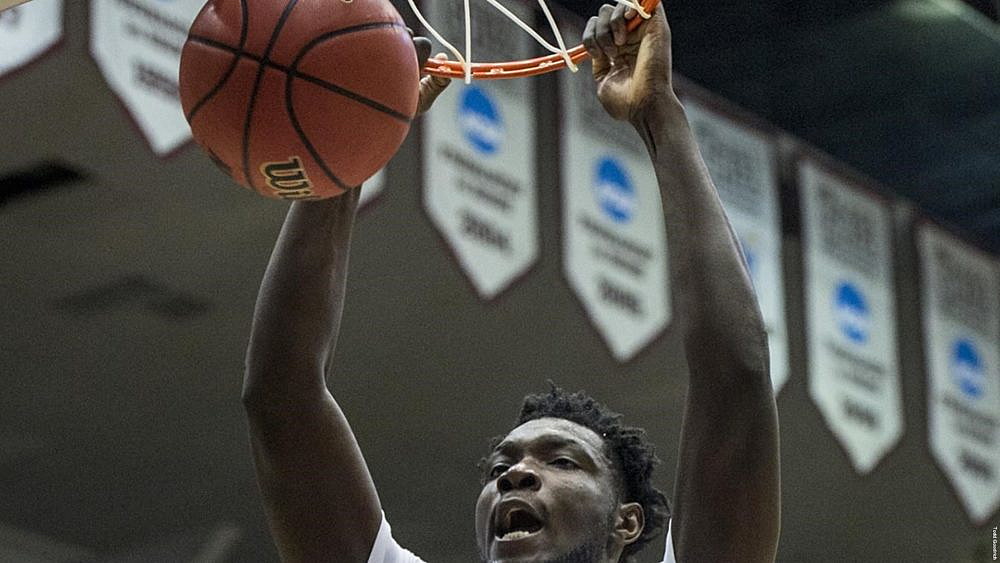 Between the travel, the short rest and having to come from behind, nothing came easy on Saturday, but in the end, Montana overcame another tough test to defeat North Dakota, 72-67, and stay unbeaten in Big Sky Conference play.

“If I’ve done anything right, it’s that I’ve surrounded myself with the right people, and when you do that you’ll be successful,” DeCuire said. “I love these guys, I love this group. It’s been a fun ride and we have to enjoy the process. I look forward to continuing the process and seeing what happens.”

Jamar Akoh was nearly unstoppable for the Grizzlies, scoring 23 points and grabbing 11 rebounds for his fifth double-double of the season. He was good all game long, but was at his best when it mattered the most, scoring seven consecutive Montana points in the second half to help turn a 49-45 deficit into a 52-50 lead with 9:50 to play.

“Grit, no glamour,” DeCuire said. “We’ve come from behind every time we’ve won here, so we knew it would be a tough test. They stuck together and fought, and we found a way to win. Our pace got better and we got more aggressive. We had a sense of confidence as the game progressed.”

Despite being a highly contested game that would come down to the wire, Montana would trail just twice over the final 10 minutes, for a total of 40 seconds.

The Grizzlies’ top-two scorers were held to 21 points – 13 below their combined season average – but once again, both did big things at critical moments.

The three was fed from Rorie, who had a career-high-tying seven assists on the day.

“I gave all credit in the locker room to Ahmaad Rorie,” DeCuire said. “It wasn’t his night, and he knew it, so he goes out and gets us seven assists and he made some big passes down the stretch. That’s when it’s a team effort.”

Sophomore Sayeed Pridgett scored seven points and had four assets and a steal, while Timmy Falls made a pair of three-pointers in the first half. Senior Fabijan Krslovic was also in double figures for the second consecutive game (12 points), making his presence down low, especially early.

“It really was a team effort,” DeCuire said. “We knew there would be an advantage down low, but at the end of the day it was Bobby Moorehead, Sayeed Pridgett, Timmy Falls, Ahmaad Rorie, Michael Oguine that worked very hard to get it in there as those two (Akoh and Krslovic) really worked well together.”

After allowing North Dakota to shoot 54 percent in the opening 20 minutes, the Grizzlies clamped down to limit the Fighting Hawks to 37 percent in the second half. UND also turned the ball over 14 times on eight Montana steals.

Still without a loss in league play, Montana has seven games remaining in the regular season – with five of them inside Dahlberg Arena. The Grizzlies will host Portland State (Thursday) and Sacramento State (Saturday) this coming week. Tickets can be purchased online or at the Adams Center ticket office.