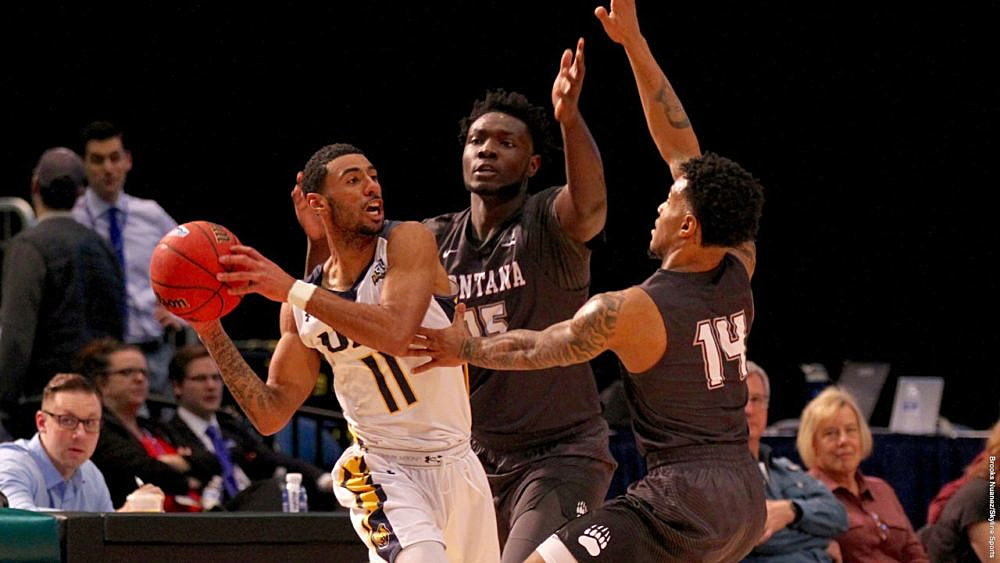 In a career chock full of conference titles, upset wins and milestone moments, Montana head coach Travis DeCuire has had plenty to celebrate. No moment tops Friday night, however.

“I’ve had some emotional games,” DeCuire said afterward. “I love this team. This is No. 1 for me in terms of basketball moments.”

Trailing Northern Colorado 76-70 with under a minute to play, Montana pulled off the improbable, forcing overtime before fending off the Bears to advance to Saturday’s championship game. The Grizzlies are now one win away from securing their first NCAA tournament berth since 2013.

“We’ve been writing on the board all year, ‘Compete with desperation,'” DeCuire said. “I think we have competed with a sense of urgency for a long time, but what we wrote underneath that today in red was, ‘Stick together,’ and I think that’s what gave us a chance.”

No words, photos or video can accurately describe the insanity that occurred over the final 60 seconds.

The Grizzlies closed regulation on a 6-0 run over the final minute and opened up the extra period with four consecutive points to take their largest lead of the night up to that point, 80-76. Montana never trailed in overtime, but it was far from without drama. After Ahmaad Rorie went 1-for-2 from the line with 4 seconds to play, UNC had a chance to win the game at the buzzer but could not connect.

Krslovic carried the Grizzlies for much of the game, totaling 16 points on 6-of-9 shooting. The senior was emotional during overtime and after the game, however, feeling like he let his team down when he was called for the foul with 1.8 seconds remaining in regulation – his fifth, which disqualified him from the game.

“I was thinking I let the team down,” Krslovic said. “I let up an offensive rebound on my guy. Being unable to help the team, I was a mess, I was a wreck, I was shaking, I was panicking.

“Everyone brought me in and told me, ‘This isn’t it, we’ve got you.’ It was unbelievable. I’m still a bit shook.”

The truth of the matter is that all eight players who saw action on Friday night contributed in a big way, and at critical times.

“What was remarkable to me was that it wasn’t one or two guys who made it happen,” DeCuire said. “They kind of all took turns. It’s contagious. This is the funnest team I’ve ever coached.”

Akoh had 16 points and seven rebounds on 7-of-8 shooting. Oguine posted team highs for points (19), rebounds (nine) and steals (three). Rorie scored 17 points and dished out three assists. Timmy Falls drew the charge that gave Montana a chance to pull off the monumental win. Sayeed Pridgett scored a dozen points, many of them during key stretches in the second half and four points in overtime. Karl Nicholas saw limited action, but made a layup late in the first half when the Grizzlies were trailing by nine, which ignited a 15-6 run to tie the game at the halftime intermission.

And then, of course, there was Moorehead’s three-pointer, the only three-point make all night for Montana.

“I knew we were down by three and something needed to happen,” Moorehead said. “I just threw it up.”

Northern Colorado led for nearly three times as long as Montana did, but the Grizzlies took over when it mattered. Trailing 60-55 with 12:01 remaining in regulation, Montana used an 8-2 run to take a 63-62 lead with under 10 minutes to play.

It was the first of 10 lead changes and four ties over the final 10 minutes.

Montana led down the stretch but could never create more than a two-point separation. The Griz held a 71-70 lead with 6 minutes to play and stayed in front until the 3:35 mark, when Northern Colorado scored 10 of the game’s next 12 points to seemingly put the game out of reach.

Things were just getting started.

“We just never quit,” Krslovic said. “We were down six, but we kept composed. It looked really bad at times, but we just do what we do, and the belief that these guys showed was just unbelievable. I was just overwhelmed with pride.”

With the win, Montana will advance to Saturday’s championship game against No. 3 seed Eastern Washington. The Eagles defeated No. 10 seed Southern Utah, 82-70, in the nightcap.

“You just have to ride the wave,” DeCuire said. “Championship games are easy to get up for. You’re on national TV, you’re where you want to be. We destroyed these guys (his own team) in April. We broke them down and then built them back up. These guys have been fighting for a long time for this opportunity, and now they’re there? I don’t think they’re going to have any problem getting up.”