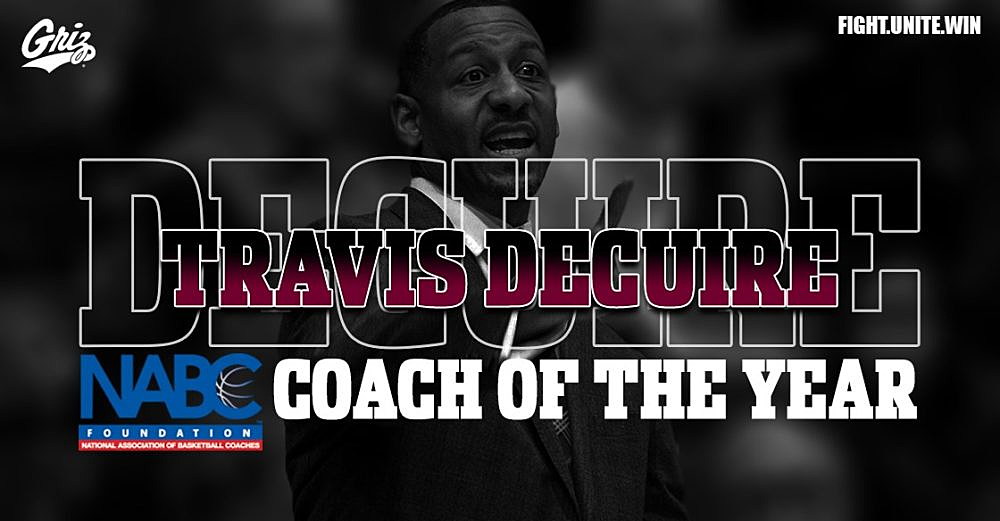 The National Association of Basketball Coaches (NABC) named Montana head coach Travis DeCuire the 2017-18 District 6 Coach of the Year. The award is voted on by fellow head coaches across the country.

DeCuire, who earlier this month was named the Big Sky Conference Coach of the Year, led Montana to a 26-8 record, winning both the league’s regular-season and tournament championships and advancing to the NCAA tournament. Montana’s 26 victories were the third-most in school history, with the Grizzlies at one point winning 13 consecutive games, seven in a row on the road and finishing the season undefeated at home.

Montana had a balanced offense that ranked among the league’s best, but it was its defense that led to great success, ranking in the top 25 nationally for turnovers forced, steals and turnover margin.

Last week, junior guard Ahmaad Rorie was named to the NABC All-District 6 first team. Rorie concluded his second season in Missoula leading the Griz for scoring (17.2 points per game) and assists (125). He was named to the All-Big Sky Conference first team after ranking in the top 10 for scoring, assists, minutes played, assist-to-turnover ratio and free-throw shooting.