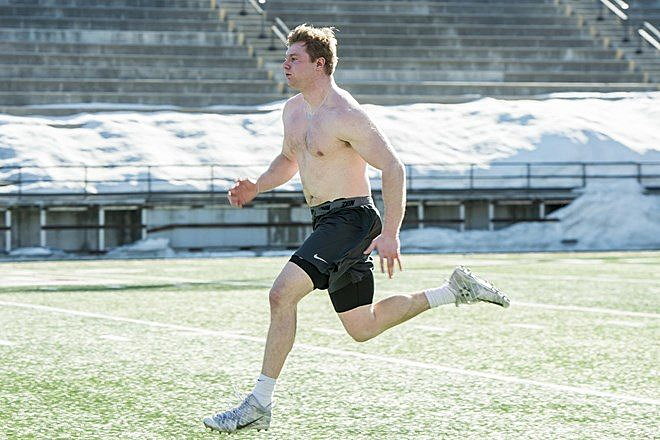 Months of toil and sweat in weight rooms across the country culminated for eight former Montana Grizzlies at the team’s annual Pro Day in Missoula on Monday. The former stars each made their case for talent scouts, looking to join the long list of Griz who have moved on to play at the next level.

The Cleveland Browns, Jacksonville Jaguars, New York Jets, Detroit Lions, and Seattle Seahawks were each on hand to run tests in the new Champions Center and on the turf inside Washington-Grizzly Stadium for nearly three hours.

Luke, who projects as either an offensive guard or center at the next level, came away from the testing with a big smile on his face and an appetite for an extra-large steak dinner after training for months with a strength coach and nutritionist in his native Washington.

“I feel like I did really good considering where I started. I felt smooth, I felt warm, loose at the points I needed to be, and I felt like I had good starts on everything,” he said.

The four-time letterman checked in at a trim 316 pounds and put up some of the day’s best numbers, including 22 reps on the bench press, and clearly enjoyed the opportunity to show his ability.

“Coach (Chad) Germer always says this is the time of your life,” he added. “When else are you going to be able just to work out, eat right, finish school and just have a great time? The time in the weight room and on the field is the time of my life,” Luke added.

Defensive back Justin Strong also posted some impressive numbers, including a 4.55 second 40 time and 17 reps of the 225-pound bench press.

“I feel great. Everything I worked for showed up today, and that’s the best feeling, to be honest. Now I just head home, see what happens and see who calls,” said Strong.

Strong’s performance is even more impressive considering he missed nearly month of training, not signing with an agent until mid-January.

“I wasn’t working out for about three weeks, and I finally found an agent, and with God’s help he got me training at a top facility in Frisco, Texas,” he added.

The athletes who tested for Pro Day now begin the waiting game, hoping teams call ahead of the NFL Draft, held April 26-28 at AT&T Stadium in Arlington, Texas.

Montana has a deep history of sending former players into the professional ranks. The Griz have had 146 players go on to the next level, with 52 draftees.

There are currently 10 former Griz on an NFL or CFL roster, along with six former players in the professional coaching or managerial ranks.