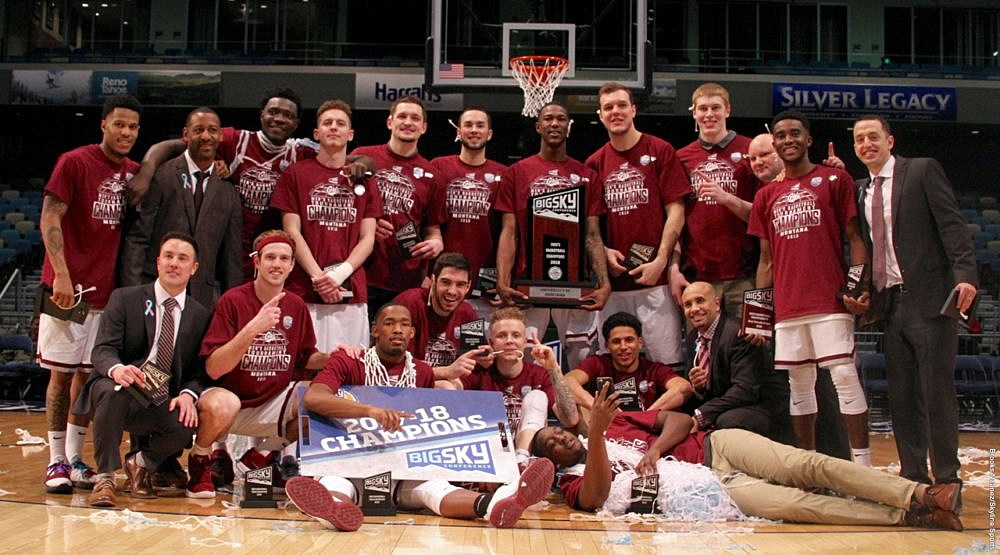 Montana added another chapter to its storybook season on Saturday night, overcoming an 11-point halftime deficit to defeat Eastern Washington and punch its ticket to the NCAA tournament.

The Grizzlies will be dancing for the 11th time in school history and the first time since 2013. Montana, the No. 1 seed in the Big Sky Championship after winning the regular-season title, is the fifth team in Montana history to win both the regular-season and tournament championships.

“When you recruit the group and you build something and you create culture the way that we did, and fight for it the way that we did, it makes it way more meaningful because we did it the right way,” DeCuire reflected. “We never let anyone outwork us, not our staff not our players.”

Montana had been oh so close to reaching this pinnacle moment in recent memory, coming up painfully short in both 2015 and 2016. For a while on Saturday, is looked as if 2018 may be a repeat.

In 2015, DeCuire’s first season leading his alma mater, Montana won the regular-season title and led Eastern Washington by double digits late in the second half of the tournament championship game before being outscored 21-6 down the stretch. A year later, Montana was back in the tournament title game and had multiple opportunities in the final minute, but Weber Stat held off the Grizzlies to win by three points.

The Grizzlies on Saturday trailed Eastern Washington by 11 points entering the halftime locker room. They were 20 minutes away from suffering another heartbreaking defeat, but this time they weren’t going to let that happen.

“We have a senior (Fabijan Krslovic) who’s given his all to the program,” junior Ahmaad Rorie said. “We didn’t want to play in the NIT; we wanted to get him to the tournament.”

Montana scored 11 of the first 13 points to open the second half, cutting the 11-point deficit to just two, 42-40, in a matter of 2 minutes, 27 seconds. The Grizzlies were just getting started.

“The energy was phenomenal,” DeCuire said about his team’s focus during the lengthy run. “We put on the board, ‘trust’. Trust each other, trust that your teammates are going to be where they need to be, trust that when you turn down an OK shot that we can get a better one and we’re going to make it. That’s what happened during that run. It was the trust that got us over the hump, and then we kind of just took the momentum from there.”

Montana made four consecutive shots early in the period, including three consecutive three-pointers by three different players. Moments later, junior Michael Oguine – who afterward was named the tournament’s most outstanding player – made both free throws to give Montana its first lead in 18 minutes.

At one point, EWU took 19 trips up the court, with Montana’s defense getting stops 18 times.

“Defense is what we hang our hat on,” Oguine said. “First half, they were making a bunch of shots, so we had to make some adjustments. Defense is contagious. We started getting stops and getting into a rhythm.”

Montana countered by playing EWU’s game, shooting 6-of-12 from deep in the second half, including the three treys to start the stanza that got the Grizzlies to within two points.

Oguine scored 21 points on 6-of-8 shooting. He scored 15 of his points in the second half, shooting 5-of-5 from the floor. Ahmaad Rorie joined Oguine on the all-tournament team. He scored 15 points on Saturday, also adding five assists. Bobby Moorehead connected on three three-pointers to finish with 12 points and five rebounds, while Fabijan Krslovic posted his second double-double of the tournament with 11 points and 10 rebounds.

“It’s really special,” Krslovic said. “It’s unbelievable. It’s the reason I came here to this program. We’ve put in so much work this year, everyone has bought in from top to bottom. It’s just really special to be part of this group.

“Last year, I remember being here, being the last one in the locker room after we were eliminated. I was sitting there and Trav came in and he told me, ‘Fab, I promise you, this time next year we’re going to be cutting down nets and going to the NCAA tournament.’ That’s been our focus all year.”

The Grizzlies, now at 26 wins on the season, will have the opportunity to tie a school record next week with win No. 27. The opponent, date and location will be revealed Sunday afternoon during the NCAA Selection Show telecast on TBS, beginning at 4 p.m. MT.

“We’re a well-oiled machine right now. I think we’re ready to play at a high level, and we look forward to the opportunity this week.”