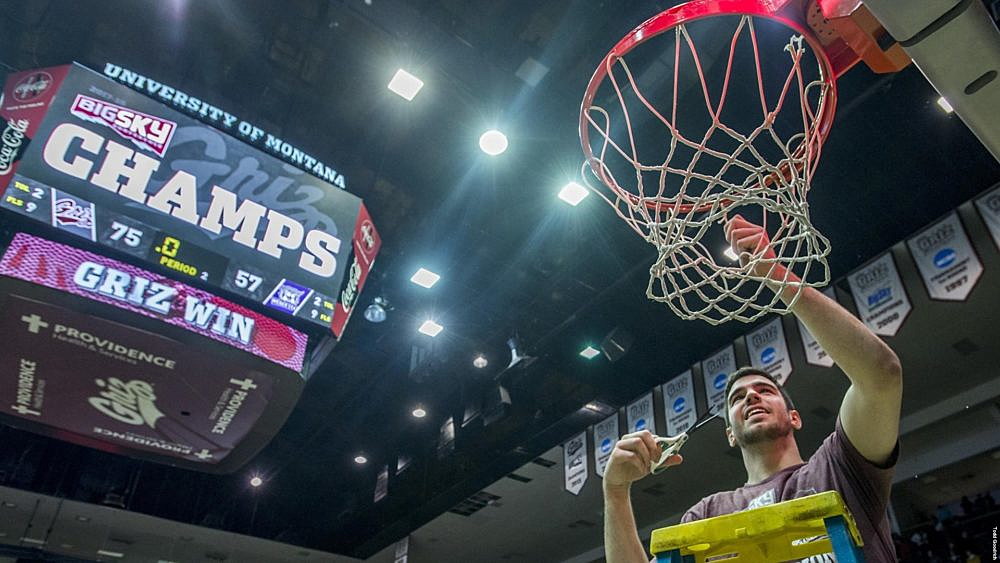 Fabijan Krslovic has been the model of consistency in every sense of the word. The senior from Sydney, Australia, will suit up for the Griz one last time inside Dahlberg Arena on Saturday night, and is looking to make it a night to remember. Two nights after celebrating the 2018 Big Sky Conference regular-season title, Krslovic and his team have the chance to become the fifth team in school history to go unbeaten at home.

Krslovic has saved his best play for last. Over the past eight games, he is averaging 11.6 points and 6.5 points per game; prior to that, over the first 21 games to the season, the figures were 5.2 and 4.2, respectively. He scored in double figures 15 times in his first 119 games, or once every 12 or 13 games. Over the past month, he’s done it five times in an eight-game span.

It’s not just the points and rebounding, however. During the eight-game span, he’s recorded 17 assists and 11 steals, while shooting 63 percent from the floor.

But back to the consistency part. Krslovic didn’t start initially, with head coach Travis DeCuireacknowledging that he lacked athleticism and the ability to put the ball in the hoop. But a few games into the 2014-15 season, and the team needing a spark, DeCuire inserted Krslovic into the starting lineup.

“I haven’t looked back,” the head coach said. “He’s a competitor, he knows what to do and he makes the most of his abilities.”

Since he stepped foot on campus four years ago, Krslovic has played in every game Montana has played, starting 111 times.

He’s been part of 127 games – so far – which means he’s also been part of a lot of wins. The Grizzlies have posted three 20-plus-win seasons with Krslovic on the floor. He’s won two regular-season titles and played in both the NIT and CBI postseason tournaments.

Krslovic will be recognized Saturday night prior to Montana’s game vs. Idaho State. Then he will look to send the Grizzlies into Reno on a little bit of a winning streak. Once they arrive, the goal is simple: win three games and earn a berth into the NCAA tournament.

“It’s been an incredible ride,” Krslovic reflected, a night after cutting down the nets in front of his home fans. “We’re not satisfied, though. We know next week is when it matters.”

Regardless of what happens over the next couple of weeks, Krslovic’s legacy will be remembered as successful. Sure, there’s the 79 victories, the win streaks and the school records, but he’s also been successful off the court. The senior holds a 4.0 grade-point average and has earned numerous academic honors, including NABC Honors Court recognition. He will graduate this spring with a degree in finance and a minor in math.

When DeCuire arrived to Missoula prior to the 2014-15 season, he called Krslovic, who had already signed to play for the Griz. Despite a coaching change, Krslovic was excited to be a Grizzly and eager to get on campus. The two have been together since.

“He’s about all the right things,” DeCuire said. “He wants to win on the court and he wants to win in life. I’m going to miss him as much as anyone I’ve seen graduate.”

And he’s a true leader – a trait he’s developed even more over the past season as the team’s lone senior.

“Everybody gets to see who he is on the court, but the leadership he gives these younger guys really is the model of what we’re trying to create,” associate head coach Chris Cobb said. “The thing that is understated is that he really doesn’t care if he gets a shot or even if he plays.

“It’s hard to find guys like that these days, but for Fab, it’s all about the team. If the oldest guy is OK with sacrificing for the group it filters down to the rest of the team, and I think that’s a major reason why we’ve been successful.”

SERIES HISTORY VS. IDAHO STATE
Montana has plenty of success over the Bengals, posting a 102-46 record. The 102 victories are the second-most against any opponent. Montana has only played Montana State, Idaho and Gonzaga more times than Idaho State.

23 AND COUNTING
A win on Saturday would give Montana its 23rd win of the season. It would mark the eighth time in school history that the Grizzlies have reached that win total and their highest since 2013 (25).

Montana has won at least 20 games in three of DeCuire’s four seasons, and as a program has finished .500 or better in 10 consecutive seasons.