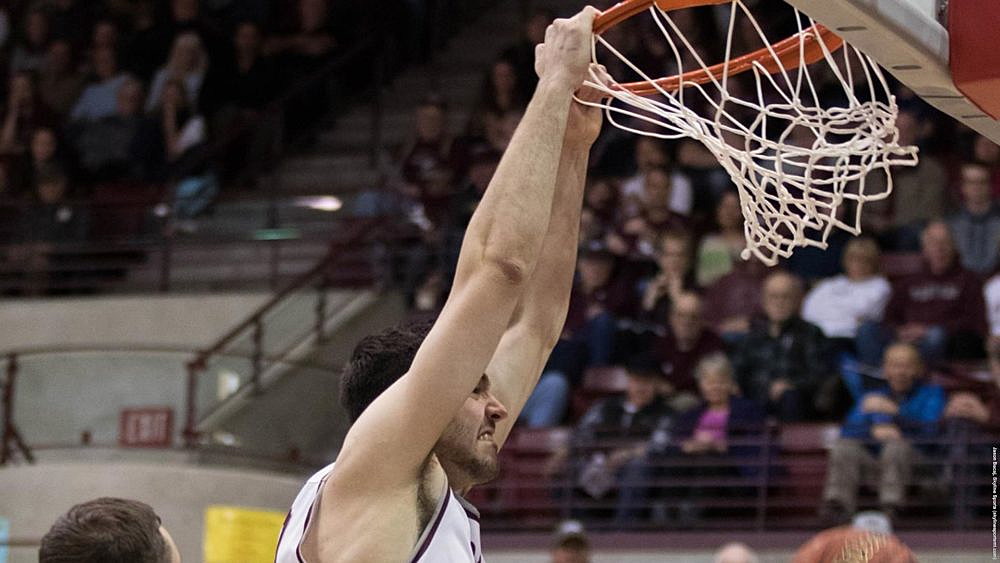 Montana capped an historic regular season on Saturday evening, defeating Idaho State, 75-64, inside Dahlberg Arena. Already with the No. 1 seed and Big Sky Conference regular-season title in check, the Grizzlies still had plenty to play for.

First, there was senior Fabijan Krslovic. The Australian has been the heart and soul of the Griz over the past four seasons, and will finish his career playing in more games than any player in school history, in addition to ranking in the top 10 for career steals.

Next, there was perfection. The Grizzlies finished the season unbeaten at home, marking just the fifth time ever and the first time in 26 seasons.

“He’s special, he’s a winner and he stands for everything that being a Montana Grizzly means,” DeCuire said of Krslovic, his first four-year player. “To see him perform the way he has, hang two banners and graduate on the Dean’s List in business is incredible. I’ll be bragging about him for the rest of my career.”

Krslovic was recognized prior to the game with a ceremony – in addition to head manager Jesse Bartels, who will graduate this May after spending four seasons with the Griz. Krslovic received multiple standing ovations on the evening, including in the final minute when DeCuire subbed him out for the final time. Moments later, he took the microphone and thanked Griz Nation for its unwavering support.

“It’s very bittersweet,” Krslovic described after the game. “I’ve had a lot of good times, good memories on this court, and the fans have been absolutely spectacular all year. To be able to go undefeated at home, that’s really something special. It was a very special night.

“I’m glad I could share this moment with my parents. They’re a big reason why I’ve been able to succeed in basketball; they’ve sacrificed so much. To be able to share that with them, that’s a once-in-a-lifetime experience and I’m so grateful for it.”

Krslovic stole the spotlight, but junior Michael Oguine was the highlight on the court, tallying 22 points and a career-high 15 rebounds. The rebound total was the most by a Grizzly since Martin Breunig totaled 16 in March 2016.

“He scrapped,” DeCuire said of his junior. “The jump shot wasn’t falling tonight, and he found a way to create offense off the second shots.”

Jamar Akoh (13), Timmy Falls (13) and Sayeed Pridgett (10) were also in double figures for the Griz. Pridgett scored six points in a span of 2 minutes, 30 seconds to help Montana close the half on an 8-1 run. Pridgett also finished with eight rebounds, while Falls had three assists.

“That’s the depth we talk about,” DeCuire said. “Both of those guys (Pridgett and Falls) provided a punch for us. That was huge and really got us going.”

The Grizzlies had a 29-28 lead with under 3 minutes to play in the opening half, but held Idaho State without a field goal for the final 2:23 of the period. The Grizzlies quickly expanded their second-half lead to double digits before ISU stormed back and made it a two-point game, 48-46, with 12:30 remaining.

Once again, though, Montana used a run to take control. ISU missed six of its next seven shots while Montana made five of seven to push the lead to double digits once again.

Montana will now enter the third stage of its season, preparing for the Big Sky Championship in Reno, Nev. The Grizzlies will play as the No. 1 seed, and will face either North Dakota or Montana State in Thursday’s quarterfinal round (12 p.m. PT/1 p.m. MT). The Fighting Hawks and Bobcats will face off in the No. 8/9 game on Tuesday.

“We’ll do our normal practice Monday and Tuesday,” DeCuire said. “We’ll work on us and tighten up some stuff. It’s a new season, but we can’t lose sight of what got us here.”