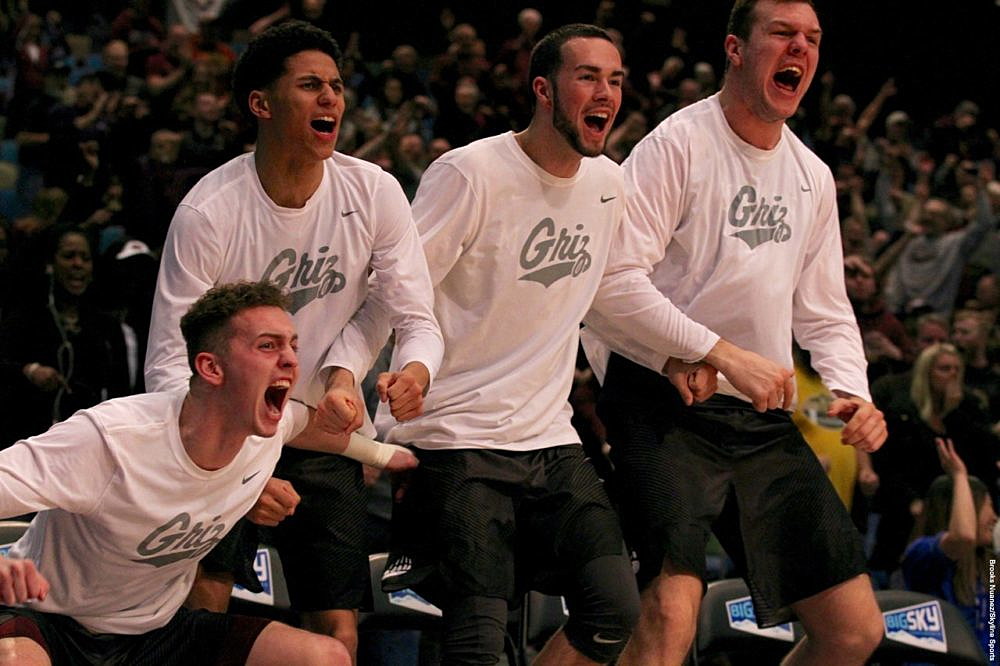 GOING DANCING
Montana has advanced to the NCAA tournament for the 11th time, including the seventh appearance this century. Montana is 2-11 all-time in the Big Dance, beating Utah State in 1975, its first-ever tournament game, and upsetting No. 5 seed Nevada in 2006.

LOOKING FOR AN UPSET
In 2006, 12th-seeded Montana upset fifth-seeded Nevada to advance to the second round of the NCAA tournament. Montana will look to knock off another highly ranked team this week in third-seeded Michigan. Over the past five seasons, five No. 14 seeds have beaten a No. 3 seed.

SERIES VS. THE WOLVERINES
Montana and Michigan will meet on the hardwood for the first time on Thursday. Montana is 3-15 all-time against current members of the Big Ten, beating Nebraska in 1959-60 and 1982-83, and Minnesota in 2006-07.

CONFERENCE CHAMPS
Montana celebrated a conference championship on March 1, the 11th regular-season title in school history and the second in four seasons under head coach Travis DeCuire. Just more than a week later, the Grizzlies were cutting down nets once again after winning the Big Sky Championship in Reno, Nev.

It marked the fifth time that the Grizzlies have won both the regular-season and tournament titles in the same season.

Additionally, Oguine was named the Big Sky Conference Defensive Player of the Year. He is the fifth Grizzly to earn the honor in the 16 years of the award.

The Grizzlies have won at least 20 games in three of Travis DeCuire‘s four seasons, and as a program have finished .500 or better in 10 consecutive seasons.

NATIONAL RANKING
Montana is ranked No. 14 in the most-recent College Insider Mid-Major Top 25. The Grizzlies cracked the poll for the first time on Jan. 15 and have been ranked as high as No. 12.

SIMPLE ROUTINE
Montana is one of two NCAA Division I schools to use the same starting lineup every game this season, using guards Michael Oguine and Ahmaad Rorie, and forwards Jamar Akoh, Fabijan Krslovic and Bobby Moorehead. The other team to do so is Central Michigan.

Rorie has scored in double figures 29 times – including 20-plus on 11 occasions. Oguine has been in double figures in all but four contests, while Akoh accomplished the feat in 19 of his final 23 regular-season games, including seven double-doubles.

FORCING TURNOVERS
Montana has forced at least nine turnovers in every game this season and ranks among the nation’s best, forcing 15.5 turnovers per game (21st in NCAA). The Grizzlies have turned the ball over more times than their opponent just eight times in 33 games and hold a +3.0 turnover margin (27th in NCAA).

On four occasions, Montana has forced 20 or more turnovers in a game, and in a win at Pitt (Nov. 13), the Grizzlies forced the Panthers into 19 turnovers, converting them into 30 points – an average of 1.58 points per turnover.

LEADING THE BIG SKY
It’s clear to see why Montana went 16-2 and won the Big Sky Conference regular-season title – The Grizzlies are among the best statistical teams on both sides of the ball. They finished the regular season ranked first for:

BE LIKE MIKE
Junior guard Michael Oguine, the Big Sky Conference Defensive Player of the Year and Big Sky Championship Most Outstanding Player, does it all for the Griz, leading the team with 48 steals and ranking second for scoring (15.8 points per game), assists (64), rebounding (5.5 per game) and blocked shots (18).

ALL-AROUND RORIE
The offensive facilitator, Ahmaad Rorie leads the Griz for both scoring (17.4 points per game) and assists (123). He’s not only one of the top Griz players, but one of the top players in the Big Sky Conference, earning first-team all-league honors and all-tournament recognition.

AKOH TAKING OVER
The Grizzlies had high hopes for Jamar Akoh, a transfer from Cal State Fullerton who redshirted a year ago. In his first two games, however, he combined for just four points and two rebounds, being limited to 28 total minutes due to foul trouble. Akoh found his groove, and over the next 31 games, he has averaged 13.8 points and 7.0 rebounds down low while shooting 59.8 percent.

FABULOUS PLAY
Considered the glue and anchor of the team, Fabijan Krslovic, the team’s lone senior, has played in every game over the past four seasons. His 131 games played (115 starts) are a program record. Krslovic will also finish his playing career ranked in the top 10 in Montana history for career steals (126).

MORE MOOREHEAD
Bobby Moorehead struggled offensively for much of his sophomore season in 2016-17, averaging 3.9 points per game on .320 shooting. The junior has turned things around in 2017-18, averaging 7.5 points per game and ranking second on the team with 51 three-pointers made. He also ranks second on the team for minutes played (31.7) and steals (40), and third for rebounding (5.0).

PRIDGETT PERFORMING
Sophomore Sayeed Pridgett is Montana’s first player off the bench, and he’s quietly and consistently putting up strong numbers for the Griz. In addition to 8.5 points per game, Pridgett ranks in the top five on the team for rebounding, assists, blocks and steals.

FRESHMAN FALLS
Freshman Timmy Falls averaged 9.3 minutes per game over Montana’s first 10 contests, scoring a total of 12 points on 5-of-19 shooting. He surpassed his point total from his first 10 games vs. UC Irvine alone, however, scoring 14 points vs. the Anteaters (Dec. 19). Over Montana’s next 23 games, Falls has averaged 5.7 points per game in 19.8 minutes of action.

FRESHMAN, Part II
Karl Nicholas has played in 30 games as a true freshman. His playing time has fluctuated throughout the season, but when he’s on, he’s an electric and entertaining player to watch.

FIRST TO 50
In four seasons in the Big Sky Conference, Travis DeCuire has won at an historic rate. DeCuire holds a 55-17 mark in Big Sky action (.764), by far the best of any Montana coach in school history. However, with his win at North Dakota on Feb. 3, DeCuire became the fastest coach in Big Sky history to reach 50 conference wins (65 games). Weber State’s Randy Rahe accomplished the feat in his 67th game with the Wildcats (50-17).

DeCuire’s current conference winning percentage is the third-best in Big Sky history, and the best among coaches with at least 40 wins.

THE 1,000-POINT CLUB
Both Michael Oguine (Jan. 27) and Ahmaad Rorie (Feb. 17) joined an exclusive list this season, with both surpassing 1,000 career points.

Oguine became the 32nd member of Montana’s 1,000-point club, scoring 23 points against Northern Arizona. Oguine enters the NCAA tournament in 17th place on the all-time list and is one of 14 players in UM history to reach the 1,000-point milestone during his third season.

Rorie became one of three players in Montana history (also Anthony Johnson and Martin Breunig) to reach the milestone in his second season. The transfer from Oregon is on pace to finish his career ranked in the top five.

GETTING TO THE LINE
Montana ranks in the top 10 percent of all NCAA Division-I teams when it comes to getting to the free-throw line. The Grizzlies average 23.3 free-throw attempts per game (27th in NCAA) and make an average of 16.5 per game (30th).

LOW-POST PRESENCE
During Montana’s six-game winning streak, the Grizzlies are out-scoring their opponents in the paint by an average of 42.3 to 29.0. The Grizzlies have led the low-post battle in 13 consecutive games and 29 times overall this season (plus one tie).

GOOD ALL AROUND
Montana ranks in the top 100 nationally (out of 351 Division-I programs) for both scoring offense (67th) and scoring defense (80th). The Grizzlies are one of 17 teams to rank in the top 100 on both sides of the ball. The 78.1 points per game and 68.7 points-allowed average has led to a +9.4 scoring margin – ranked 36th nationally, including the best figure in the Big Sky Conference.

CRASHING THE GLASS
Montana has out-rebounded its opponent 23 times this season and holds a +4.8 rebounding margin (second in Big Sky, 46th nationally).

Nearly one-third of Montana’s rebounds have come from the offensive end (32.2 percent); that number was 28.6 percent a year ago. The Grizzlies are currently averaging 12.0 offensive rebounds per game this season (52nd in NCAA).

50%
Montana has connected on nearly half of its shots this season (.471), a figure which ranks in the top 50 nationally. The Grizzlies have made more than half of their shots in a game 12 times, including a season-best 62 percent vs. North Dakota (Jan. 4). The percentage was the highest by a Big Sky team this season.