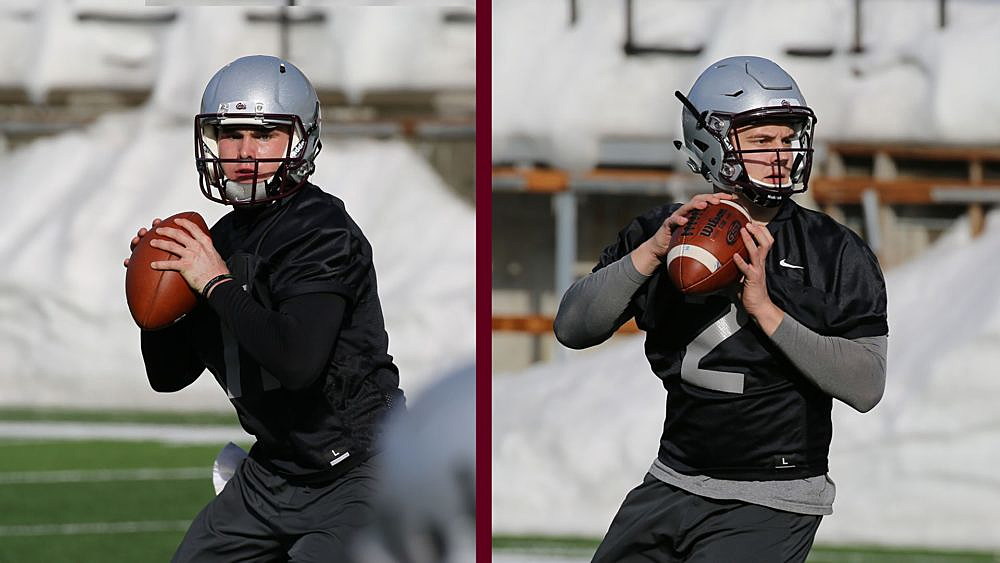 The Montana coaching staff opened its first spring season under head coach Bobby Hauck in early March with the goal of opening up the competition and watching the cream rise to the top as they begin to build a depth chart.

At the halfway point of spring ball, the cream is still rising to the top at the quarterback position, as three signal callers each make a case to be the next starting Grizzly QB.

Gresch Jensen, Dalton Sneed, and Tanner Wilson have all shared reps, with the majority split between Jensen and Sneed, who each bring valuable game experience to the position.

So far, Hauck likes what he sees.

“All three guys are doing a nice job. It’s a pretty heated competition right now, a little bit back and forth, so that will probably make us better at the position the more competition we have,” said Hauck.

Jensen, the incumbent starter who produced the best freshman numbers in Montana history last year as an injury reserve, is focused on connecting with the new staff and system while trying to maximize every minute of practice.

“It’s crazy how fast it’s going, but it’s going well. We’re just trying to get our feel down and our timing. It’s an adjustment with a new staff and implementing a new offense, but I think the guys are really picking it up. So, spring has gone well so far,” said Jensen.

“The system is similar to what we’ve been doing in the past. So, we’re just chipping away at it and going from there, getting the terminology down and getting comfortable with the receivers again is what we’re focused on.”

The sophomore has the luxury of knowing his targets, with UM only graduating two wide receivers from last year (Josh Horner and Makena Simis). As he implements a new system, he’ll have the familiarity of six returning receivers with five or more appearances in 2017, including the team’s leading receiver from 2017, Keenan Curran.

The competitor in Jensen is apparent to anyone who saw him play last season, taking over for an injured starter and leading the offense to a top-10 national ranking, averaging 455 yards per game.

But with two other QB’s competing for a starting spot this spring, Jensen knows the result will make the whole team better as well.

“I’m just going out there and trying to get better each day. Whatever happens, I can live with the result. I know I did my best and went out there and competed, which will only make us better.” Jensen says.

Sneed is also no stranger to the starting QB spotlight, turning heads at UNLV with a 90-plus yard touchdown run in his first game as a Rebel, before getting caught in a numbers game and trying his luck at the junior college level.

Back in the mix for a D-1 starting job, Sneed is relishing the competition.

“I love the competitive nature of it, that’s how you build a great team. Gresch, Tanner and I are competing every day,” says Sneed. “I think we have great chemistry in the room, knowing we all have each other’s back, but you also want that competitive edge, because without that no one is getting better.”

While still getting to know his teammates, as a former recruit of Hauck’s and Offensive Coordinator Timm Rosenbach‘s at UNLV, Sneed is familiar with the staff and its expectations.

With the spring game around the corner, he is focusing on executing Rosenbach’s offense to make sure Grizzlies take the field with the best possible chance to win.

“I feel like once you connect with your offensive coordinator and you’re seeing eye-to-eye, you’re winning ballgames. I think that’s what myself and Gresch are trying to do is get exactly on the same page with him, because if you are, it’s a hard offense to stop.”

Montana’s spring game is set for April 14 at 1 p.m. in Washington-Grizzly Stadium, with the pregame tailgate starting at 11 a.m.