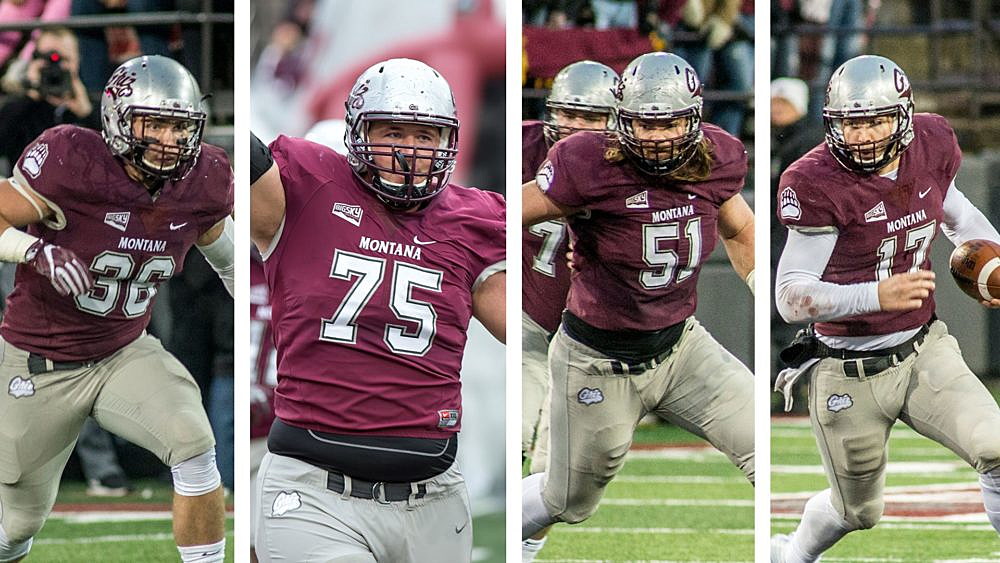 Four former Montana football players have earned a place in the 2018 National Football Foundations Hampshire Honor Society, which recognizes college football players from all divisions who maintained a cumulative 3.2 GPA throughout their careers while excelling on the field of play.

Qualifications for membership in the NFF Hampshire Honor Society include being a starter or a significant contributor in the player’s last year of eligibility; achieving a 3.2 cumulative grade point average throughout entire course of undergraduate study; and meeting all NCAA/NAIA-mandated progress towards degree requirements.

An all-time high of 1,251 players from a record-tying 302 schools qualified for membership in the society’s twelfth year. 2018 marks the third-straight year the society has seen record membership, indicating a nation-wide growth in academic emphasis among student-athletes. The initiative has now honored 8,994 student-athletes since its inception, and the program has experienced growth every year in either members or school participation since its launch in 2007.

“We are pleased to see another record number of athletes honored by the Hampshire Honor Society this year,” said NFF President & CEO Steve Hatchell. “Over the past decade, it has become a powerful vehicle for schools to recognize their college football players who have distinguished themselves both academically and athletically, and we congratulate the schools and each of these young men for their commitment to excellence in all aspects of their lives.”

Banks, a linebacker from Junction City, Ore. who maintained a 3.5 GPA led the Big Sky Conference in tackles for loss last season with 15.5. The chemistry and management major also led the league in tackles averaging 10.1 per contest for a total of 111 takedowns. As a two-year starter, Banks totaled 154 career tackles.

A four-time Academic All-Big Sky honoree and a 2017 all-conference honorable mention at right guard, Luke was a stalwart on Montana’s offensive line in his career. The Tacoma, Wash., native will graduate from UM with a 3.59 GPA in sociology.

Ralston was a three-time Academic All-Big Sky honoree who maintained an impressive 3.92 GPA in business analytics during his time at UM. The Oregon City, Ore., native started every game his senior year at right tackle, the fourth position he played during his career.

Simis was a two-time Academic All-Big Sky selection with a 3.25 GPA in history, political science and secondary teaching. As a sophomore backup quarterback he tied the, then, school record for touchdown passes in a game with six against North Dakota, earning both conference and national Player of the Week honors. As a senior wide receiver, Simis returned to the QB position, leading Montana to victory over Northern Arizona.

Montana has had at least one student-athlete recognized in each of the Hampshire Honor Society’s 11 years. In 2017, Devon Dietrich, Brady Gustafson, Aaron Held, Ryan Johnson and Jackson Thiebes represented the Griz on the prestigious list honoring academic and athletic excellence.