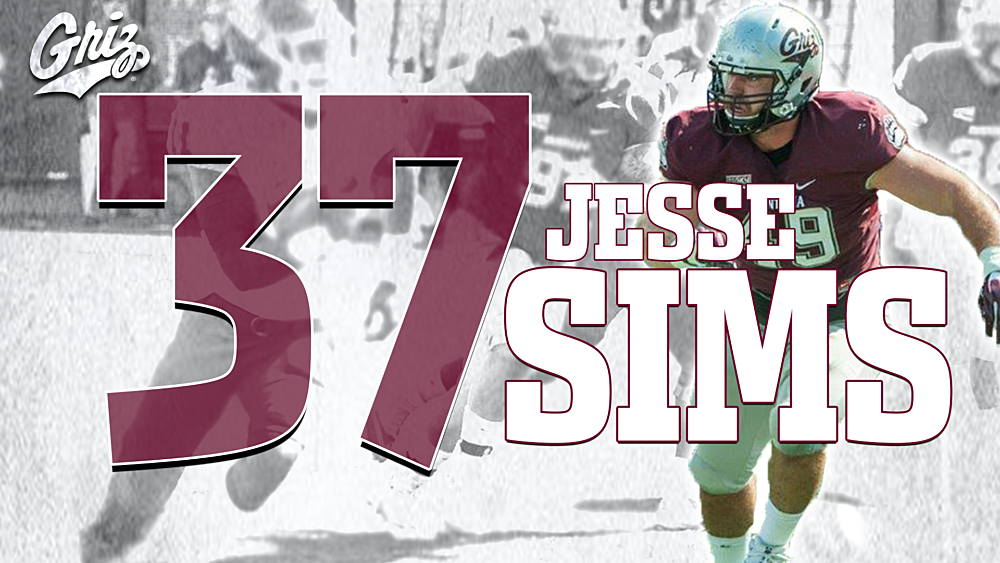 If there is an award that encompasses what the No. 37 jersey means to Montana football, it’s the “Offseason MVP,” a recognition given annually at the team’s awards banquet.

The Offseason MVP goes to the player that dedicates himself to the betterment of the team when no one is looking. The player who sneaks in extra work when the workout is complete. The player who brings his lunch pail to work every day and does so with a hard nose.

The famed 37 jersey represents all of that, wrapped up in a homegrown athlete who hails from the state of Montana.

So it’s easy to see why Jesse Sims earned the Offseason MVP award his freshman year at UM, and why Tucker Schye has chosen him to be the next in a long line of Grizzly greats to wear the No. 37 jersey.

Sims, a redshirt junior defensive lineman from Stevensville has earned a reputation for being one of the hardest workers on the team. As such, he will carry on the No. 37 jersey legacy for the next two seasons.

“It’s a huge honor. There are a lot of great guys that have worn this number in the past, not just great football players but great people off the field, so I’m just honored to be a part of it,” said Sims.

Sims emerged as a force on the defensive line his freshman year, starting in six games and playing in every game of his career to date. In 2018, he returns as UM’s fourth-leading tackler from 2017, recording 43 tackles, six TFLs, 3.5 sacks, and a pair of quarterback hurries as a sophomore tackle.

As the first Grizzly from the Bitterroot Valley to ever don the jersey, Sims has known what the jersey means to Grizzly football, and what it means to Montanan’s all around the state.

As a former Oregon State commit, he says he has been dreaming of wearing the jersey since the day he chose to be a Grizzly instead of a Beaver.

“To me, it represents what Montana is as far as being hard-working, blue-collar, and dedicated. That’s what the number means, and I’m honored Tucker passed it to me,” Sims added.

The #37 jersey legacy began in 1983 when Griz fullback and Plentywood native Kraig Paulson began the tradition of passing it on to a younger player who hailed from the state of Montana.

Paulson was known for his hard-nosed play and workman mentality. Number 37 has come to represent the Spirit of Montana, hard work, dedication to the team, and mental and physical toughness on and off the field.