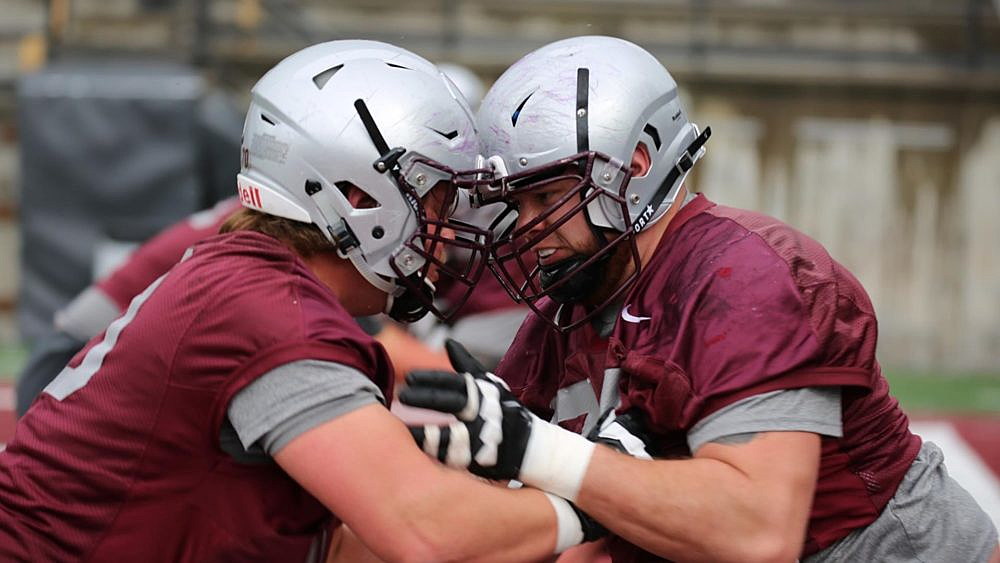 After each practice during the Montana football spring season, Dallas Hart has stayed late to work on mastering his snaps with quarterback Gresch Jensen as the junior offensive lineman transitions from guard to center.

The goal: 20 perfect snaps. “And if they’re not perfect, we keep on doing them until they are,” says Hart. “I like the position, and I think I’m progressing.”

That’s the kind of dedication to the craft you’ll find in this year’s Grizzly O-linemen, a group long on size, but short on experience with just three returning juniors, six sophomores, three freshmen, and not a senior among them.

It’s an approach they will need to take too, as veteran line coach Chad Germer looks to find replacements for the four senior starters who have moved on to graduation with a combined total of 102 career starts, including first-team All-Big Sky tackle David Reese.

With only 10 active O-linemen on the roster, one returning starter, and five returning lettermen, the young group needs to season quickly. After 10 practices, they are starting to come of age, and their growth been a pleasant surprise for the Grizzly coaching staff.

“We’ve made some strides. I’m encouraged by the number of guys who are in the mix, so we’re able to play a lot of guys. We’ve got a long way to go, though.” says Germer. “The good thing is we have some athleticism and a lot of guys who really want to be good, so the ceiling is high.”

With 22 career starts at left guard and weighing in at an imposing 324 pounds, junior Angel Villanueva is the de facto veteran leader of this year’s O-line and is also excited about what he’s seen from his group.

“I think we’re progressing well, and every day we get better,” said Villanueva. “I think all the guys are giving all their effort to learn everything and we need just to continue to grow as a unit, trust ourselves, trust each other, keep our nose in the playbook, and I think we’ll be alright.”

As Germer looks to fill in gaps left by last year’s senior class, sophomore tackles Conlan Beaverand Brandon Scott are known quantities, while freshmen like Missoula’s Colton Keintz have been sharing plenty of reps as well while Thayne Jackson recovers from surgery.

While the coaches shuffle the decks, players like Hart have found a new home and are making the necessary adjustments to make an impact this season.

“I think Dallas has done well and we knew he would. I always felt he could play guard or center,” said Germer. “He’s been working on snapping since the day he got here, and it’s gotten better every day. He’s a smart kid, and he’s relishing the opportunity he has and making the most of it.”

Just because Montana lost the core of one of the most experienced offensive lines in program history, does not mean this year’s group is reinventing itself.

The 2018 Griz are picking up where last year’s squad left off, doing the little things necessary to perform, no matter the age of the player.

“I think we’re a really tight-knit group. Coop (Cooper Sprunk) used to invite all us over to hang out together, and we’re trying to carry that tradition on because we understand to be a next level offensive line the camaraderie needs to be there outside of football,” said Villanueva.

And that good old-fashioned DOLA?

“I think we’re all buying into the offensive line mindset, and I think we’re all enjoying it. Now it’s just coming out here every single day and getting to work, just like we have been. Keep our heads down, keep humble, keep taking coaches advice, and we’ll be OK.”

Fans will get their first look at the 2018 Griz offensive line along with the rest of Head Coach Bobby Hauck‘s squad as the team prepares for its first public scrimmage of spring ball on Friday, April 6, at roughly 3 p.m.

The annual Grizzly Scholarship Association Spring Game is also right around the corner, scheduled for April 14 in Washington-Grizzly Stadium. Tickets cost $5, with proceeds from the game and the pregame tailgate going to support scholarships for student-athletes.