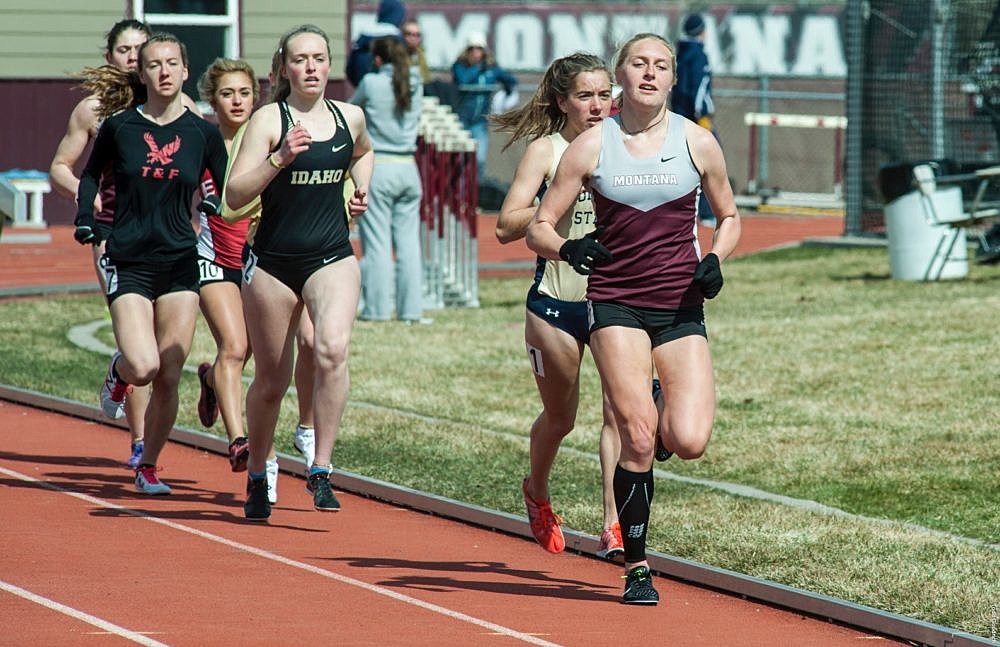 In total, Montana had five event wins and 32 personal bests, leading to a 5-3 team result against the competition.

“Conditions were not ideal, but overall, considering the weather, I think there still were some bright spots,” head coach Brian Schweyen said. “It was great to have an opening meet with five Division-I teams and some really high-level competition.”

The 10th-year head coach liked how his team battled through adverse weather conditions – which included wind and below-freezing temperatures when the meet began. However, that also lowered his ability to evaluate where his team is at.

“I think the wind knocked the bar off, so we have to restart,” Schweyen said of where his team is at. “It was good to get out on the track today, but we have a lot of work to do. Regardless of how young we are or how inexperienced we are, we have to have some vast improvements over the next two weeks, and that starts on Monday.”

Among the highlights of the day included Montana’s sweep in the men’s and women’s javelin. Sophomore Zena Smith was the top women’s performer, throwing a career-best 144-1, while junior Jensen Lillquist won the men’s competition by more than 25 feet, reaching 211-10 on his second throw of the finals.

Perhaps more impressive than the wins, however, was Montana’s depth. Of the nine finalists on each side, the Grizzlies had four women and three men advance.

“That’s going to get him to regionals,” Schweyen said of Lillquist’s mark. “I know he’s going to put a lot more on that, too. Zena had a lifetime best, and really, there were a lot of individuals in that group doing some pretty big things. They showed a little bit of that today, and we should see a handful of those kids going to regionals as they continue to progress.”

“She’s just a gutsy runner,” Schweyen said of Hamilton. “She really finished the indoor season on a high note and ran a fantastic conference championships. She’s never been indoors, so this season was a learning process for her. She’s an outdoor runner, and she showed today what she can do on an outdoor track. It was a great day for her.”

Sophomore Holly Houston won the women’s discus (148-6), while Montana’s fifth event win came from the men’s 4×400-meter relay team. The Grizzlies were in second place halfway through the race, but Josh Riley, in the third leg, made up ground and gave the Grizzlies a commanding lead as he passed the baton off to Chase Armstrong, who finished the race with a time of 3:27.12.

Schweyen was also impressed with freshman Brent Yeakey, who narrowly missed a win in the men’s shot put (runner-up 52.5-25), and junior Jonathan Eastwood, who had two strong races, including a third-place finish in the men’s 1,500 meters (4:02.34).

Complete highlights:
Women’s hammer throw: The meet officially began on Friday with the hammer throw. The Grizzlies were led by sophomore Mariah Harvey, whose top mark of 161-4 was good for fifth place out of 15 athletes, and was 19 inches shy of a personal best. Five of her six throws reached at least 158 feet. Junior Kayla Holmes (149-7; seventh) had an upper-half finish, while sophomore Holly Houston placed 11th with a mark of 114-6.
Men’s hammer throw: Competing in the hammer throw for the first time as a collegiate athlete, freshman Deszmon Humphries placed eighth out of 15 throwers, reaching 155-10 on his final throw. Sophomore Oliver Grajeda (136-2; 12th) and freshman Peter McMahon (79-3; 14th) also participated for the Griz.
Women’s javelin: Of the nine athletes who advanced to the finals in the women’s javelin, four were Grizzlies. Montana had plenty of success in the event, earning three top-four finishes, including Zena Smith’s top mark. Smith, a sophomore, reached 144-1 (career best) to win the event by a half foot. Sophomore Darby Henthorn placed third (140-3) while junior Maddie Foulk was fourth (career-best 138-1). Sophomore Kimberly Earhart (127-1; ninth) also was a finalist for the Griz.
Women’s shot put: Sophomore Mariah Harvey placed third out of 11 competitors with a top mark of 41-7.75, a career best and quarter-inch from second place. Sophomore Holly Houston placed sixth (37-3.25).
Men’s long jump: Sophomore Nolan Staats was Montana’s top long jumper, placing fourth out of 15 jumpers with a top mark of 21-11.75 (career best).
Women’s long jump: Sophomores Jenna Dukovcic (17-11.75) and Hannah Coburn (17-4.25) placed fourth and sixth, respectively, out of 14 jumpers.
Women’s pole vault: Sophomore Chloe Seferos reached 11-3.75 in the pole vault, placing third out of 15 athletes.
Men’s high jump: Sophomore Grant Whitcutt was one of three competitors to reach higher than six feet, jumping 6-4 (third). Sophomore Parker Spadt was just behind Whitcutt with a fourth-place finish (6-0). Senior Charlie Bush and sophomore Josh Riley tied for sixth with heights of 5-10.
Men’s shot put: Montana had a pair of freshmen place in the top four of the men’s shot put (out of 15), led by Brent Yeakey’s second-place finish (52.5-25). Deszmon Humphries placed fourth (49-10).
Men’s javelin: Junior Jensen Lillquist won the men’s javelin by more than 25 feet, throwing 211-10 on his second throw of the finals to win the event. Montana had three athletes compete in the nine-person finals, with Will Jones (career-best 151-6; fifth) and John Beckers (career-best 167-2; seventh) also advancing. Sophomore Grant Whitcutt (139-9; 10th) also had a career-best performance.
Women’s high jump: Sophomore Jane Booth was Montana’s top performer in the high jump, placing third with a height of 5-3. Freshman Abby Dodge was sixth out of 11 jumpers (5-3).
Women’s discus: Sophomore Holly Houston won the women’s discus with a mark of 148-6. Junior Kayla Holmes (131-3; fifth) and sophomore Mariah Harvey (117-4; ninth) also competed for the Griz.
Women’s triple jump: Montana had two of the top-three performers in the triple jump. Senior Madison Neufeld finished runner-up, jumping 36-7, while freshman Rachel Lewis reached 35-7.25 in her first meet.
Men’s discus: Freshman Brent Yeakey placed fourth out of 14 throwers in the discus, reaching 155-1.
Men’s steeplechase: Senior Nathan Wellington was Montana’s top performer with a time of 10:11.00 (sixth).
Men’s 4×100-meter relay: Made up of Courtlynd Brown, Josh Riley, Rhett Streeter and Chase Armstrong, Montana placed third out of four teams with a time of 43.24.
Women’s 1,500 meters: In her first outdoor meet, freshman Madeline Hamilton won the women’s 1,500 meters with a time of 4:41.80. She trailed the leader by a stride entering the final lap and by multiple strides entering the final turn, but made her move in the final straightaway to pull ahead and win the event. Freshman Madison Ward placed seventh out of 10 athletes (5:20.46).
Men’s 1,500 meters: Junior Jonathan Eastwood (4:02.34; third), freshman Kyle Kredo (career-best 4:09.14; fifth) and Karsten Pease (4:17.14; seventh) finished in the upper-half of the 14-athlete field.
Women’s 100-meter hurdles: Hannah Coburn ran a career-best 15.04 (adjusted) to place second out of 11 runners in the 100-meter hurdles.
Men’s 110-meter hurdles: Sophomore Chase Armstrong was Montana’s leader in the 110-meter hurdles (15.53; fourth).
Women’s 400 meters: Freshman Mijah McLeod finished third out of 12 athletes in her first outdoor meet (1:00.16). Freshman Jaree Mane (1:03.02; eighth) was also competing in her first meet.
Men’s 400 meters: Freshmen Trevor Henry (51.56; sixth), Colton Hess (52.40; ninth) and Will Jones (53.69; 11th) made their 400-meter debuts.
Women’s 100 meters: No Montana participants
Women’s 800 meters: Of the seven attached athletes, senior Emily Cheroske placed first with a time of 2:15.35. In her first outdoor collegiate meet, freshman Madison Ward placed sixth (2:40.20).
Men’s 800 meters: Junior Karsten Pease led a trio of Grizzlies in the 800 meters, placing sixth out of 14 runners (1:57.99).
Women’s 200 meters: Sophomore Hannah Coburn posted a career-best 26.15 (adjusted), placing in the upper half (seventh) of the 14-person event.
Men’s 200 meters: Montana had four freshmen compete in the 200 meters: Rhett Streeter (22.55; third out of 18), Trevor Henry (23.09; eighth), Colton Hess (23.31; 11th), Courtlynd Brown (23.57; 12th).
Women’s 5,000 meters: Sophomore Samantha Engebretsen was Montana’s lone runner, placing third out of seven runners (career-best 18:14.31).
Men’s 5,000 meters: Senior Paden Alexander (15:46.25; third) and Dillon May (16:03.43; sixth) performed well for the Griz in the men’s 5,000 meters.
Men’s 4×400-meter relay: Montana’s ‘A’ team of Colton Hess, Trevor Henry, Josh Riley and Chase Armstrong won by more than 5 seconds (3:27.12). The Grizzlies were in second place halfway through the race, but Riley, in the third leg, made up ground and gave the Grizzlies a commanding lead as he passed the baton off to Armstrong.

The meet was the first of seven leading up to the Big Sky Championships, including one of four at Dornblaser Field. Montana will be in action again next weekend in Spokane, Wash., before returning to Missoula to host the Montana Open on April 14.