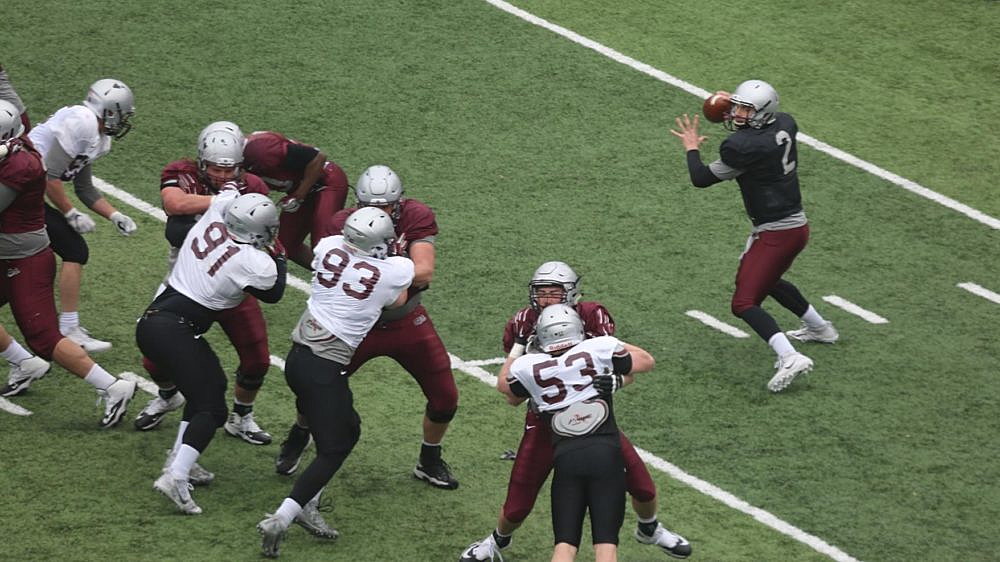 Led by two quarterbacks who split reps and compiled similar numbers, the Montana Grizzly offense hummed along in, at times, midseason form, racking up 81 points over the course of 94 plays during the second scrimmage of spring ball.

As is the norm with spring scrimmages, the offense’s performance on Friday inside a blustery Washington-Grizzly Stadium was a rebound of sorts from the team’s first scrimmage held prior to spring break, where the defense put in a standout performance.

During that first scrimmage, Montana head coach Bobby Hauck said the goal was to squeeze in as many reps as possible, just move the ball up and down the field. During the Friday’s scrimmage, however, the Griz worked on more situational execution.

Turns out, those situations were favorable to the offense.

“We got to work on some specific things, and I thought that went good. It will be great from an educational standpoint off the film on Monday and Tuesday next week,” said Hauck.

“That’s kind of the nature of spring ball. One side is going to win, and you worry about the other side, but I was pleased with the execution. The weather wasn’t real friendly today, but we’re hoping to play in weather like this so I think that was productive.”

The offense rolled out a 397-yard, 12 touchdown performance, with 254 of those yards coming over the air.

But even with such eye-catching numbers Montana’s battle at quarterback didn’t see a lot of separation, as Gresch Jensen threw for 129 yards and Dalton Sneed was equally productive with 123 yards in the air, combining for seven passing scores.

“Everybody was clicking, doing their job, not trying to do too much, and look at the results. We did really well on offense today,” said Sneed who went 8-for-23 passing.

“Gresch and I have both seen the same defense for three weeks now, so we’re starting to know where the holes are, know who the playmakers are and get them the ball in space.”

While Montana’s quarterbacks remained consistent, it wasn’t a lack of pass coverage that led to inflated numbers on the scoreboard. The defense, after all, tallied 11 pass breakups and a pair of sacks.

What stood out for the Grizzlies were the receivers, who continually went up and made the catch despite solid coverage from the defensive secondary. No turnovers helped the cause as well.

“I think that’s a strength of this team is the receiving corps. When you got the ball thrown to you, you have to make a play,” said Hauck.  “The offense took care of the ball, but we want the defense coming up with those opportunities as well.”

Familiar names rose to the top of the stat sheet for the receivers, with Justin Calhoun leading the way with four grabs for 47 yards and a pair of touchdowns. Also impressing was Samori Tourewho caught three passes and scored three touchdowns – each more acrobatic than the one before – for 35 total yards.

While the Grizzlies were able to sustain multiple drives the distance of the field, much of Montana’s scoring came in red zone-like situations, starting with a first down from in or around the defense’s 20-yard line.

Early in the scrimmage, the rushing game played a vital role in getting points on the board, wearing down the defense with five rushing touchdowns, each scored by a different player.

Leading the Griz on the ground was freshman San Diego State transfer Adam Eastwood, who netted 41 yards on eight carries. Close behind was senior Alijah Lee with seven carries for 40 yards and a score, breaking away for the day’s longest run of 25 yards too.

Rey Green, a sophomore who spent 2017 recovering from an injury sustained at fall camp, re-emerged as a threat as well, taking eight carries for 30 yards.

Defensively, a pair of young stars led the way for the Griz in tackling, with redshirt freshmen Marcus Welnel and Braydon Deming each totaling seven take downs. Deming also registered a half-sack and a five-yard tackle-for-loss for a sturdy haul on the day.

Senior defensive end Reggie Tilleman was impressive on the edge, blocking a pair of passes, while Dante Olson, now back at linebacker after a stint this spring as a defensive end, nearly had a pair of interceptions in his two pass breakups.

Montana now returns to the field next week for the final two practices of spring ball on Monday and Wednesday before the spring game on April 14 at 1 p.m., with the GSA tailgate starting at 11.

“We did a lot of good things today, but when we see the film there will be a lot of bad things as well,” said Sneed

“We’ll get those honed in next week, and head into the spring game locked and loaded.”

The Spring Game will be broadcast statewide on SWX, with a web stream available on GoGriz.com for fans outside of the SWX footprint.

Tickets for the Spring Game are available at the Adams Center Box Office, as well as various outlets around Missoula, including: