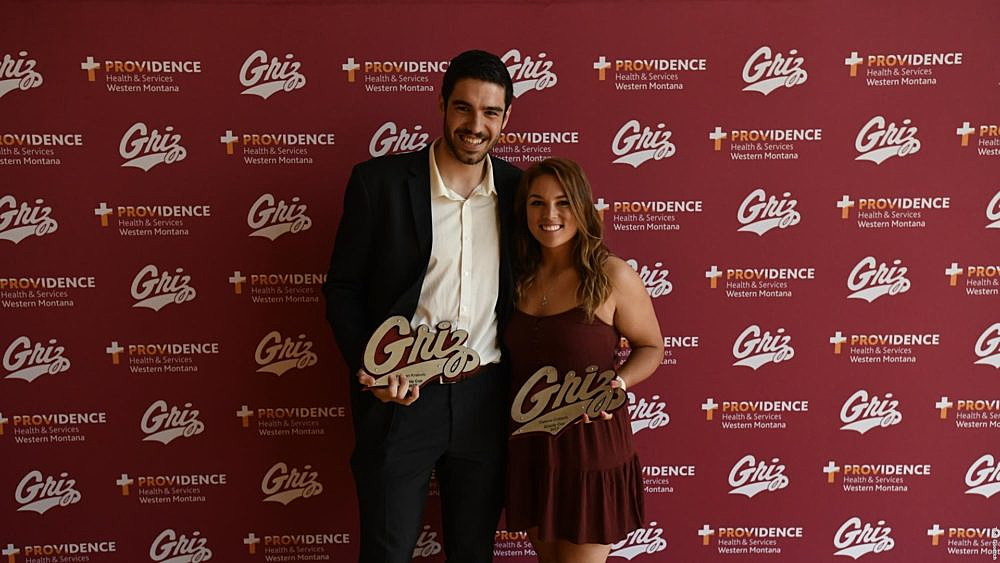 Delene Colburn (softball) and Fabijan Krslovic (men’s basketball) have been named Montana’s top senior student-athletes. The announcement was made Wednesday evening at the 26th annual Grizzly Athletics Scholar-Athlete Honors Banquet, where Colburn and Krslovic were presented the Grizzly Cup award.

The award was initiated by Dr. W.E. Schreiber, who served as the head of UM’s physical education department for several years.

Delene Colburn / Softball / Auburn, Wash.
Colburn, an elementary education major who will graduate this month, becomes the first Montana softball player to win the Grizzly Cup. As a member of the first class to make it through the four-year-old softball program, Colburn has inked her name all over early editions of the record book.

She has started all 214 games the Grizzlies have played and enters the final month of her career with a four-year batting average of .372, with 45 home runs and 197 RBIs.

She has two times been voted second-team All-Big Sky and as a junior was named third-team National Fastpitch Coaches Association All-Pacific Region after leading Montana to the NCAA tournament.

“Delene exemplifies the true meaning of a student-athlete,” said coach Melanie Meuchel. “When you watch her on the field, she is contagious for people because she is all in. She plays with everything she has and has a lot of passion for it.”

“Delene has each semester shown she approaches her work in the classroom with the same passion she has for softball,” said Meuchel. “And this semester she has proved her commitment to being a true student-athlete by the hours she has had to put in.”

Fabijan Krslovic / Men’s Basketball / Sydney Australia
Krslovic becomes the fourth Griz hoops player to earn the award in the past six seasons. During his four-year basketball career, he led Montana to 83 victories, a pair of conference championships and a berth in the 2018 NCAA tournament.

On the court, Krslovic was the glue and anchor of the team, playing in a program-record 132 games (116 starts). Known for his hustle, his 126 career steals rank in the top 10 in school history, while as a captain in 2018, his .630 Big Sky shooting percentage ranked second in the league.

He is a two-time recipient of the Dennis T. Murphy Coaches’ Award and in 2018 earned both the Naseby Rhinehart Award (team’s most inspirational player) and Allan Nielsen Award (player who best represents Griz Basketball). Off the court, he is a three-time Academic All-Big Sky honoree and last summer earned NABC Honors Court accolades for his 4.0 grade-point average.

“Fab is about all the right things,” head coach Travis DeCuire said. “He wants to win on the court and he wants to win in life. He embodies what we try to bring in when we go out recruiting, because he’s consistent and he’s the complete package. Every team needs a person like Fab.”

Krslovic will graduate this month with a degree in finance and a minor in math. He intends to move back to his native country to continue his professional basketball career.