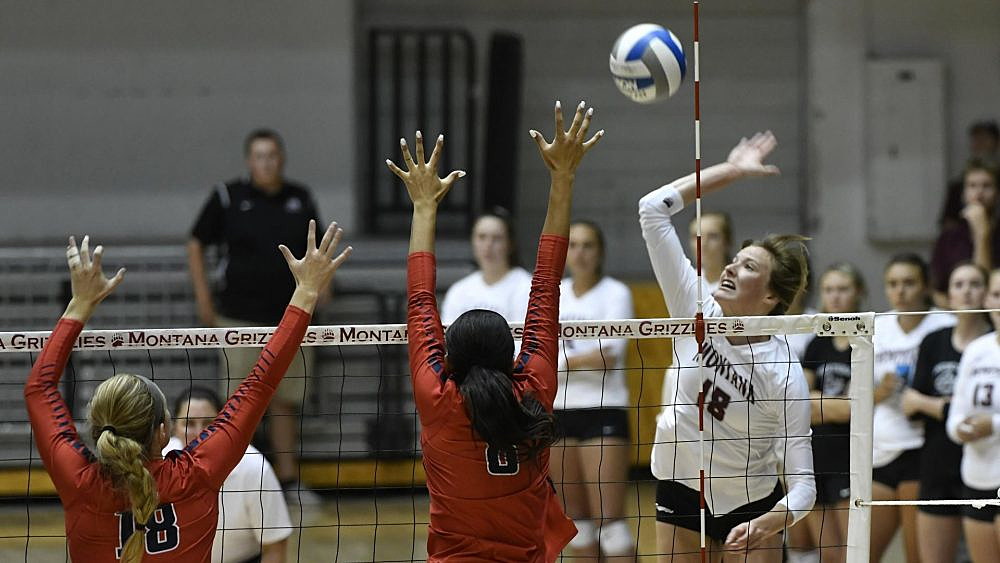 Trailing 12-11 in the fifth set, Montana’s back was against the wall. Gonzaga – which rallied to win the third and fourth sets after Montana took a 2-0 lead – had earned three consecutive points, forcing head coach Allison Lawrence to burn her final timeout.

“As a team, we have been talking about being all in, and what I mean by that is exposing ourselves to just really going for it, as cliché as that sounds,” Lawrence said. “We’ve gotten so close against so many teams, and then mentally we’ve gotten a little afraid of, ‘What if we lose again?’.

“In the timeout, we really emphasized that we get to choose what we focus on. If we execute our minds, we’ve clearly shown that our bodies can do what they need to do. Mastery of your mind is the ultimate pursuit for any athlete.”

Coming out of the timeout, senior Mykaela Hammer recorded a kill, and then two points later added another to knot the score at 13-13. But Gonzaga took advantage of a UM attack error to earn match point, needing just one point to seal the comeback victory.

That’s now how the story would unfold, though. Missy Huddleston, who had been so clutch all day, tallied her career-best 24th kill to keep the Grizzlies alive. She then went back to serve and delivered an ace, flipping the script and giving Montana match point.

“I think I jumped as high as I have since college,” an ecstatic Lawrence said. “I was very emotional. We had players crying, we had coaches hugging. We’re a program that has been starved for wins, and I want us to be so hungry. When that last ball falls, it’s the feeling of coming up for air and all of your emotions come pouring out.”

The final set had nine ties and three lead changes, totaling 27 and eight during the marathon match.

The day started off strong for Montana, with the Grizzlies winning sets 1 and 2 decidedly. Montana held Gonzaga to .138 hitting and out-blocked the Bulldogs, 8.0 to 1.0, and had five service aces to the Bulldogs’ two.

“We controlled the ball really well early on,” Lawrence said. “They did what we scouted them doing, so we had a really clean game plan and we all executed at a really high level. Once we got in their heads, I feel like we overwhelmed them a little bit.”

Coming out of the intermission, though, Gonzaga was a different team. The Bulldogs held Montana to 27 total points across the two sets, recording 11 service aces. With momentum, the Bulldogs then led 2-0 early in the fifth set, 8-6 at the switch and as late as 14-13. But Montana never gave up.

“There’s something about Missy,” Lawrence said. “When she really plays the way she can play it’s so cool to see. She’s one of the most graceful athletes I’ve ever seen.”

Huddleston had been struggling in the front row, so Lawrence challenged the junior that she needed to be more terminal on offense in order to see the court in the front row.

“She got the go ahead to play last night, and I think she was touching two inches higher than normal,” Lawrence said. “She was playing with no restraint. When she lets loose and plays like that, I don’t know anyone’s game like that.”

Marshall had 11 kills, none bigger than the final two, while Hammer added 10 kills, nine digs and three blocks. Montana tallied 11.0 team blocks in the match. The Grizzlies were led by middle blockers Janna Grimsrud (career-high-tying six for the second consecutive match) and McKenzie Kramer (five).

Saturday was an all-out team effort, though.

Baily Permann played for just the final 1.5 sets, but had four kills on five swings when she was on the court. Cassie Laramee was used only as a server, but had two aces. Brittany Gay made her season debut in the fourth set, helping run a 6-2 offense. And then there was freshman Olivia Bradley, who played just a single point – the final point of the match. Lawrence subbed the freshman in to serve, floating a tough serve that forced an overpass and set up Montana’s game-winning kill.

“I really like that we earned this win; Gonzaga didn’t give it to us,” Lawrence said. “Everybody had a role and played their part.”

On the stats sheet, Saturday will show up as one victory in a long season, but for those inside the program, it represented much more.

“This is an emotional game and we don’t hide our emotions,” Lawrence said. “I feel pure joy and pride, and to do it in front of our home crowd, in that arena, with everyone clapping on game point and the place feeling like they had our back is just the coolest feeling ever.”