Over the course of 17 years, Trampled by Turtles has developed from a group of rock musicians playing local shows across Minnesota to one of the most influential Bluegrass bands in the country, releasing eight full-length albums along the way. Three of their albums have held places on the US Billboards bluegrass chart, and their fifth release, Palomino, held the Top 10 … END_OF_DOCUMENT_TOKEN_TO_BE_REPLACED 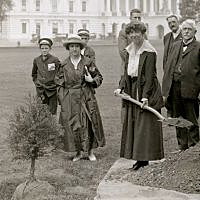 “The day was perfect. The sunshine took a conspicuous part in the proceedings.” The Missoula Brass Band played as “crowds of little ones in spring attire and those of mature years” poured out onto the school yard. It was Tuesday, May 18, 1887: Missoula’s first Arbor Day. The morning had been spent in special exercises at the school. Students from all grade levels … END_OF_DOCUMENT_TOKEN_TO_BE_REPLACED

Professor Emeritus Steven Gaskill prefers to meet outside, gliding into Sacajawea Park on a bike with yellow fenders and a milk crate, sitting on the opposite end of the bench to forge a safe distance during an interview. He has pursued a variety of projects in his time, describing his guiding philosophy as “if a door opens, walk through it.” Right now, he’s leading efforts … END_OF_DOCUMENT_TOKEN_TO_BE_REPLACED 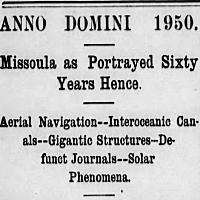 Imagine Missoula as the largest, most powerful and most influential city in America, dwarfing New York and Washington.  Imagine its skyscrapers so tall that new technology would be required to allow elevators to reach such heights. The Missoula Weekly Gazette envisioned such a future in a front page article on March 18, 1891. Titled “Anno Domini 1950 – Missoula as … END_OF_DOCUMENT_TOKEN_TO_BE_REPLACED 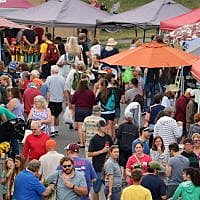 (KPAX) MISSOULA — You will be able to drink your favorite beverage while eating a homemade pastry this weekend at the Missoula Farmers Market. On Saturday, the market - located near the XXX's - will welcome back their cottage industry vendors. Those include bakers, candy makers, beverage vendors, flower and plant purveyors and canned good creators. They will join the … END_OF_DOCUMENT_TOKEN_TO_BE_REPLACED