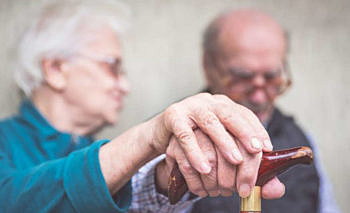 It’s estimated that more than 20,000 Montana residents over the age of 65 have dementia, and with the state’s population projected to age, those figures could reach 27,000 people within the next seven years.

Faced with the rising cost of providing care and the absence of a cure, a coalition of groups that include Missoula Aging Services and the University of Montana are working to build a dementia-friendly community, growing education and boosting early detection.

“A dementia-friendly community allows people to function in the community and stay involved, and it helps ease the burden of care giving,” said Patti Holkup. “It keeps them out of long-term care for a longer period of time, thus decreasing the cost.”

Holkup is one of several volunteer members of the education committee with the Missoula Coalition on Aging and Disability, a group that formed to address what’s predicted to become both a community and financial challenge in the years ahead.

Dick Blank, also a member of the group, experienced first-hand the heartache and challenge of providing personal care to his wife, who was diagnosed with dementia in 2003. In retrospect, Blank now believes his wife began struggling with early onset of the disease in her 50s.

“It started very subtlety and I basically missed most of the things happening with my wife,” he said. “As a care giver, I found myself out in the community with my wife where something would happen because of her dementia. I would feel like I was in a pickle so to speak. People were looking at me like I should do something different.”

Blank recalled how his wife struggled to track conversations and how she placed her keys in unusual places where she couldn’t find them when she needed them. The disease progressed, requiring round-the-clock care.

Despite the prevalence of the disease, Blank believes the community is ill-equipped to address the challenges that will come with an aging population. From providing basic education to fighting stigma, changes are needed sooner than later, he said.

“Very little has changed since we were dealing with it,” said Blank. “If we can early diagnose, better understand, support our care givers and reduce the time people don’t need care, we can reduce the costs. It’s a real problem.”

According to the Alzheimer’s Association, the disease and associated dementia remains the sixth leading cause of death in Montana, resulting in $139 million in annual Medicaid costs.

In the state, caregivers like Blank stand 49,000 strong and provide more than 56 million hours of unpaid care. The cost of caring for a dementia patient is expected to increase more than 41 percent by 2025.

“The issue we have here in Missoula and across the state of Montana and the nation is as the population continues to age, the prevalence of Alzheimer’s and other dementia is rising,” said Holkup. “It’s a chronic disease and very costly, both financially and in terms of informal care givers.”

Terry Egan, the associate director of the Geriatric Education Center at UM, said the local groups are working to implement the state’s Alzheimer’s and dementia plan.

Among other things, the plan looks to spread awareness and create dementia-friendly communities where those with the disease remain empowered and confident while participating in group activities.

“We’re saying that dementia is like cancer used to be a long time ago,” said Egan. “It’s the new issue that we have in aging, but it’s not well known. People are experiencing it every day and they’re trying to figure out how to work with it.”

The Missoula Coalition on Aging and Disability will host Missoula: A Dementia Friendly Community on Wednesday, Oct. 18, from 6-8 p.m. The event is free and will take place in the Todd Building on the University of Montana Campus in room 204.