Just before the band marched by blasting the University of Montana fight song, Sherri Higgins ducked into her maroon and silver recreational vehicle parked on Campus Drive.

A crowd of 30,000 had gathered in the street, sipping beer and celebrating homecoming weekend. Washington Grizzly Stadium and Grizzly Gateway stood nearby, their shadows growing shorter as kickoff approached.

“This” is Higgins’ Grizzly-themed recreation vehicle, easily the most identifiable motor home parked outside the stadium at any given home game. While it’s not the biggest or sleekest RV, the custom-painted homage to everything UM has become a home-game staple over the past 13 seasons.

Seated on maroon cushions fluffed in the back with UM Grizzly curtains catching the midday sun, Higgins recounted the RV’s story and how it ended up in the family by happenstance back around 2005.

“Some friends of ours that sit behind us in the North End Zone owned it, and they were going to burn it,” Higgins said. “They were done with it and didn’t want to use it anymore and they got a new motor home. We said we’d buy it, and they said we were the only ones they’d sell it to.”

Higgins and her husband purchased the vehicle in a partnership with sister-in-law Peggy Floyd and her husband, along with the unnamed “cook” who, at the moment, was doing the game-day grilling near the rear bumper.

The family went to work transforming the dated vehicle into a Grizzly wonder, from the cushions and curtains to the Grizzly posters, photographs and etched-out Montana State bobcat stickers adorning the front quarter panel.

“Power in the Rockies” read the 2006 team poster tacked over the rear window. “The Biggest Show in Montana” read a poster from the year before. Both are slightly faded and curled from the sun.

“We started collecting the posters and pictures and hanging everything up, but some of the posters might need to come down,” Higgins said while considering her monochromatic surroundings. “We’ve kind of run out of room. The posters that have come out the past couple years, we don’t have have any place to put them.” 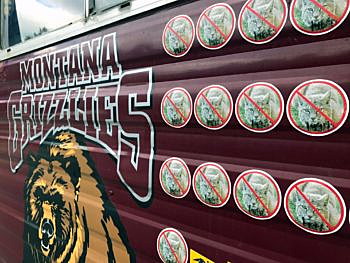 Higgins became a self-professed Griz fan some time back in the early 1990s when her son graduated from UM. She knows her team history, recounting how Don Reed was head coach when UM first emerged as force in what served at the time as the NCAA’s Division I-AA conference, now known as the Football Championship Series.

“My sister, who owns this with us, her and her husband moved to Billings from Wyoming and we brought them over to a game one time,” said Higgins. “They were hooked and were going to drive from Billings to Helena and then over here with us each weekend. But in that time frame, her husband got transferred here from Conoco, and it made it that much easier for us to be here.”

That, in a nutshell, is why the Grizmobile now sits parked in Missoula, where the family converges from across the state and fires it up on Saturday mornings when the team is in town. They landed their front-row parking spot on Campus Drive a few years later and have held it ever since.

Through good seasons and bad, Higgins and company continue their attendance, lighting their grill and opening their doors to friends and fans alike.

“It’s the people, the crowd, the excitement of being here,” said Higgins. “It’s the unique atmosphere of a college this size. Several years ago, Sports Illustrated put out the top 25 tailgating school in the U.S., and UM was 25.” 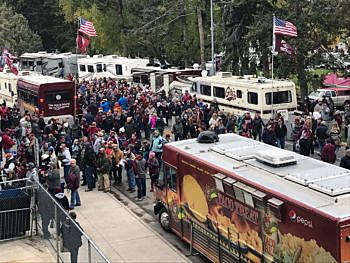 That ranking described UM as a smaller school where fans drink Trout Slayer and Moose Drool on the banks of the Clark Fork River. Another magazine rightly noted that the state’s fourth largest city springs up outside the stadium whenever the Griz are in town.

As for the perennial question as to whether the Griz should join the Mountain West Conference in the NCAA’s top division, Higgins says no. That may be a debate for another time.

“I like where they’re at,” she said. “When you get up there, it’s more competitive. I think the competition is a little tougher in that other division, and we’d have to travel farther.”