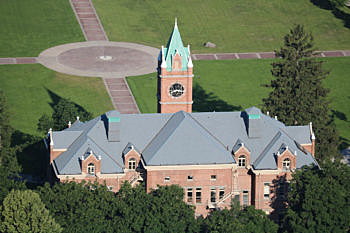 Two Regents professors at the University of Montana won top professional honors last month, each recognized among “The World’s Most Influential Scientific Minds.”

Released by Clarivate Analytics, the publication names Ragan Callaway, a professor of ecology, and Steve Running, a 2007 Nobel Prize winner and researcher best noted for his work on climate change.

Both professors ranked in the top 1 percent of scientists by citations for field and publication work.

“Professors Callaway and Running are most deserving of this recognition,” said Scott Whittenburg, vice president for research and creative scholarship at UM. “I have been in many scientific meetings where the work of each has been cited, so it’s not surprising that citations of their publications are in the top 1 percent of their fields.”

According to Clarivate, those noted in the 2017 report have distinguished themselves by publishing a high number of papers that are most often cited by peers in their respective fields. As a result, their work as been judged for its “notable significance and utility.”

Callaway is a professor in the Division of Biological Sciences who, among other things, studies how plants function together in communities and ecosystems. He has traveled the world studying how plants survive and form communities in some of the harshest environments on Earth.

“The publication of seminal work by our faculty and the citation of that research by others in the field are one of the key reasons UM continues to be ranked among the top universities in the world,” Whittenburg said. “Research and creative scholarship at UM continues on a bright path forward.”

Whittenburg said that UM brought in nearly $88 million in new funding during the past fiscal year to support homegrown Montana research. That exceeded the prior year’s record of $86 million.

Callaway, Running and Schwartz were the only researchers in Montana included on the list.