When it comes to outdoor amenities, Montana’s state parks and their public trails reign supreme.

A new report from the Institute for Tourism and Recreation Research at the University of Montana found that almost nine in 10 state residents have visited a Montana state park in the past year, and most go looking for a public trail when there.

“Understanding what the resident state park user desires in (a) park is paramount to a successful park system,” said Norma Nickerson, director of ITRR. “The most frequently cited amenity was public trails. However, age plays a role in the intensity that Montanans desire trails.”

The study split the Montana population into three adult categories ranging from 18 to 35, 36 to 55, and 56 and older. The wants and needs expected from a state park differed by age.

Ben Alexander of the Montana Parks in Focus Commission said the information gleaned from the survey will come in handy.

“We wanted to find out what Montanans across the state are looking for when they visit state parks, so we can build the park system that delivers the best park experience to most residents,” he said. “It’s not surprising trails are in high demand. There’s something magic in the way parks connect us all, and trails appear to do that for most state park visitors.”

Nickerson, who also serves on the Parks in Focus Commission, said that while trails are the most popular amenity, state parks must provide recreational experiences to all visitors, and all age groups.

“It’s so easy to get the average and call it good,” Nickerson said. “In the case of this study, the average could be the 36 to 55 age group. We also need to consider the needs of younger and older Montanans.”

The ITRR study surveyed 6,193 Montanans over 18 at gas stations and rest areas throughout the state from April through mid-June. The data were weighted to represent Montana’s population and gender. 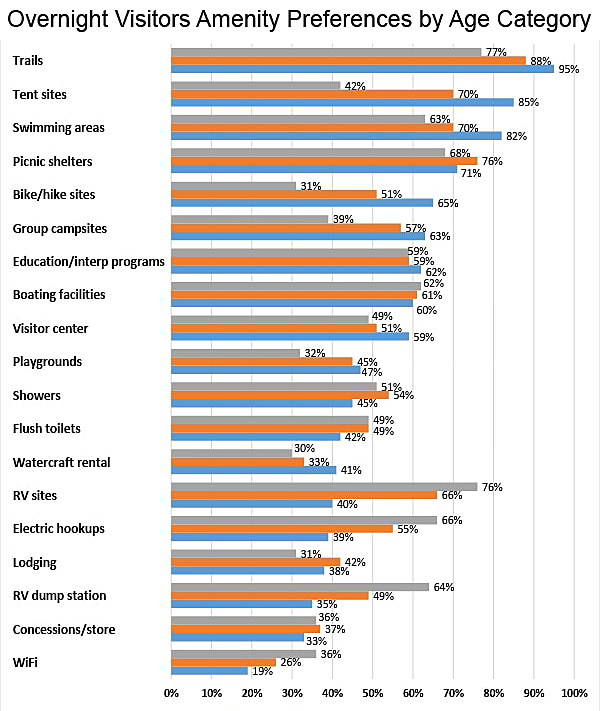