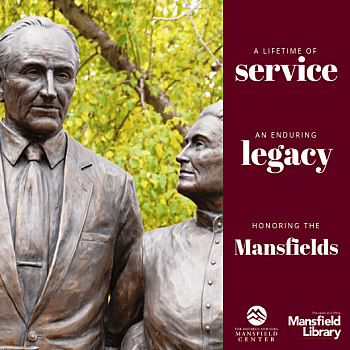 Members of the Mansfield family will visit the University of Montana to honor the legacy of the late Maureen and Mike Mansfield on Friday, Oct. 19.

The plaque, sponsored by Special Forces Association 28, features Ambassador Mansfield’s military career, as well as his political career. The dedication is free and open to the public and will take place at 4:45 p.m. at the Mansfield statue in the area between the University Center and the library.

Prior to his long-standing service as a U.S. representative, senator and ambassador, Mansfield also served in the U.S. Armed Forces. At 14, Mansfield lied about his age and enlisted in the U.S. Navy during World War I. Though he eventually was discharged from the Navy when his age was discovered, Mansfield joined the U.S. Army and then the U.S. Marines after WWI. He was honorably discharged in 1922.

UM’s Mansfield Center promotes better understanding of Asia, U.S. relations with Asia and ethics in public affairs in the spirit of Sen. Mike Mansfield (1903-2001) and his wife and life partner, Maureen Hayes Mansfield.